How to sign up for the World of Warcraft: Shadowlands beta

World of Warcraft players can now sign up for the beta for Shadowlands, the next expansion coming to the retail edition of the game.

The current expansion, Battle for Azeroth, has seen its last major content patch in 8.3, which introduced the final raid of the expansion, Ny’alotha. It is set to be followed by Shadowlands, which was unveiled at BlizzCon 2019.

The cinematic trailer for expansion saw Sylvannas take the Lich King’s crown and destroy it, tearing apart the veil between life and death and opening a path to the Shadowlands.

While Shadowlands doesn’t yet have a release date, it likely won’t launch until much later in 2020. Some time before then, however, there’ll be a beta testing period in which some players will get the chance to try out the expansion early.

When is the Shadowlands beta?

Unfortunately, Blizzard haven’t yet announced exactly when players will be able to jump into the Shadowlands beta.

It’s also fairly hard to predict exactly when the beta might arrive, as Blizzard haven’t historically had a consistent period of time between the announcement of a new expansion and the arrival of the beta, with the gap varying anywhere between five and nine months.

With Shadowlands having been revealed at BlizzCon in November 2019, this means that the beta isn’t likely to arrive until May at the earliest, but it could also be quite a long wait after that.

Signing up for the Shadowlands beta is a simple process – all you need to do is go to the WoW Shadowlands website, sign in with your Blizzard account and hit the opt-in button. 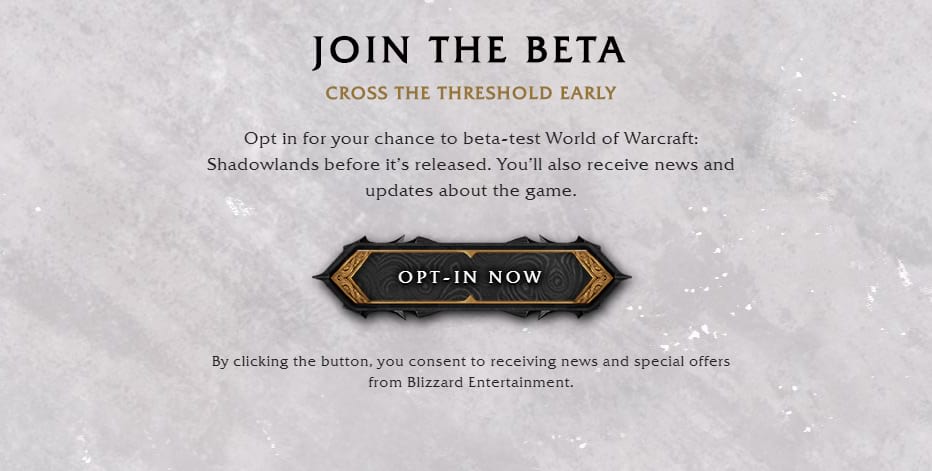 Not every player who opts in is guaranteed to get a place, but if you don’t opt-in you cannot be chosen. Blizzard also haven’t stated exactly what criteria is used to determine invites – it’s very possible that it’s random, but there’s certainly no harm in opting in as soon as possible in case there’s a first come, first served aspect.

Beta invites will often go out in waves, so don’t be too disheartened if you don’t have a spot when the beta first launches, as you may get in a little later.

Signing up for the beta will also mean you get emailed Shadowlands updates, so regardless of how long it is until the beta actually arrives you should be aware whenever Blizzard make an announcement.