Two characters were unveiled along with a season 3 announcement for Tekken 7 after the grand finals at Evo 2019.

Along with season 3 of Tekken 7, the trailer showcased new moves for all characters – which is sure to add a tidal wave of depth to an already extremely technical fighter.

The Egyptian character of Zafina, who was introduced in Tekken 6, will be coming back as DLC.

At the end of the trailer, it’s revealed that Season Pass 3 is coming in September 2019, so fans won’t have to be waiting too long to get their hands on the new content.

Finally, the game’s newest original character Leroy Smith was also unveiled. His on-screen character bio reads: “50 years ago, a young boy was caught up in a large scale gang conflict in New York, losing his family and home.

Missing for decades, he has finally returned to New York, now as a seasoned master of martial arts – and he’s out for revenge.”

Smith is then seeing performing a number of moves on his opponents before a timeline screen for Season 3 is unveiled providing fans with more context of what’s to come.

Zafina and Leroy are coming in September, but then in the Winter, fans will be treated to a new character and feature. More info on those are sure to come in the future. 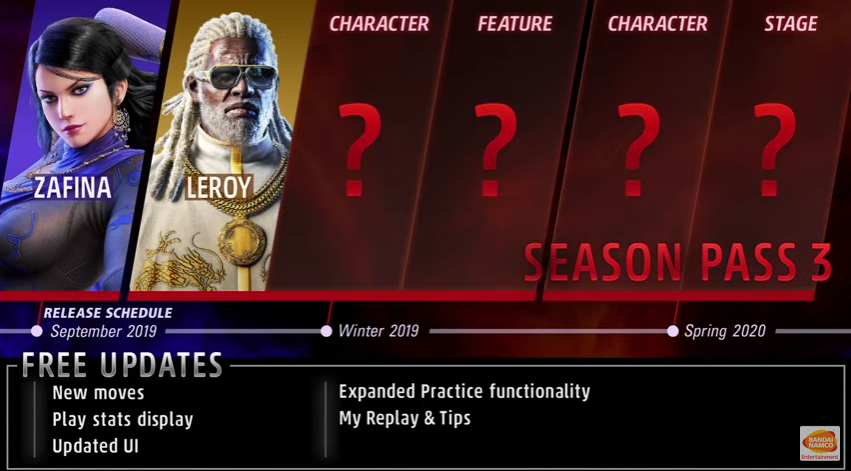 Finally, nearing the end of Winter or Spring 2020, yet another character and stage are planned as part of the game’s third season pass.

It may be August, but it feels like Christmas for Tekken fans.