Terry Bogard finally joined the cast of Super Smash Bros Ultimate on November 6 and players have already discovered a potentially game-breaking glitch with the new fighter.

DreamHack Director Alex Jebailey has informed Dexerto that while Terry Bogard is legal at DreamHack Atlanta, the staff are aware of the glitch and will plan accordingly.

“Since we’ll be updating the systems over the next week something quick could be patched in to fix the issue. We’ll plan accordingly but the 6.0 update will be used at [DreamHack Atlanta],” he said in a statement.

With every new patch there’s always the possibility for new glitches to make their way into the game. We saw this earlier in 2019 when DLC fighter Joker’s Final Smash would cause Switches to freeze and now something similar, albeit less extreme has slipped through Nintendo’s cracks with the 6.0.0 update.

YouTuber China Champ uploaded a video on November 6 showcasing what appeared to be a standard match between Terry Bogard and a user-controlled Ice Climbers. 36 seconds into the video, the Terry player is seen going for a Buster Wolf special move which is only available because he had taken over 100% damage. 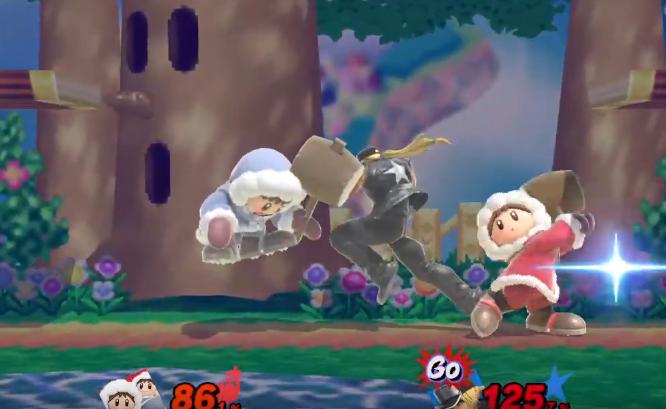 Terry, are you okay? Not in this glitch.
[ad name=”article2″]

As Terry was in the Buster Wolf animation, the Ice Climbers player used the Side Special Squall Hammer which caused the computer-controlled Nana to literally freeze along with the Fatal Fury protagonist. Additionally, the screen turned into a bizarre blue haze unbecoming of the Dream Land stage.

With Terry and Nana frozen in midair, the Ice Climbers player couldn’t do anything and with one stock left, was forced to self-destruct giving his opponent the victory. After jumping off the map, the game returned to normal.

It’s unclear what caused the screen to freeze, but no doubt players will be trying to recreate this recent discovery in their own games.

It will be interesting to see how future tournaments where Bogard is legal will deal with this glitch. Luckily, Ice Climbers are not an incredibly meta pick, so the chances of having both Terry and the gruesome twosome in a match at the same time is unlikely.

This isn’t the first Smash Bros game to feature a freezing Ice Climbers bug. Back in Melee, it was possible to freeze an opponent by grabbing the enemy with the secondary Ice Climber while Side Bing with the primary fighter.

Of course, Melee was back on the GameCube so the glitch still exists to this day, but it’s likely that this new bug involving Terry gets taken care of in a future update.