The highly-anticipated online component of Red Dead Redemption 2 is going to start rolling out this week and players now have an early look at some of the achievements Red Dead Online will have and what to expect from the experience.

Red Dead fans have been eagerly anticipating any news of the online mode for the popular western title since its announcement, so the November 26 update of a release window came as a welcomed surprise. But it looks like there are players who are already combing through Red Dead’s shared open-world.

Taking from the snippets of information attached to the achievements, Read Dead Online will be bringing mechanics from the main game to the online installment. However, with a new mode comes new elements as well.

In conjunction with Rockstar’s announcement today, players will recognize “Posse Up” and “Strength in Numbers” as feats to overcome with friends. Others are more obscure such as “Series Major’ which tasks players to participate in a ‘series.’

Although it is still unclear what that means but since it is unique to Red Dead Online, it will probably require some form of cooperation with other players to complete.

The leak has a list of eight achievements, most of which introduce something new for online outlaws to look forward to.

As some completionists might know, Red Dead Redemption 2 launched with 51 achievements. so this small list shouldn’t be expected to be the complete lineup of accomplishments to complete. 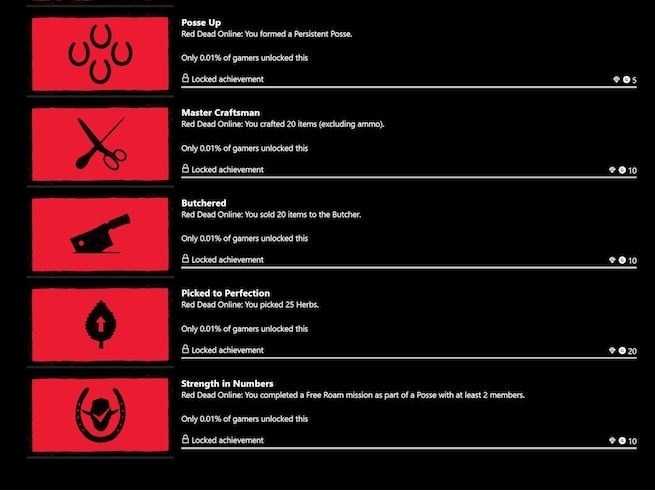 Rockstar acknowledges that this week’s release will go far “to deal with the inevitable turbulence of launching any online experience of this size and scale.” Read Dead Online will be available to some starting Tuesday, November 27 and at full steam by Friday, November 30.