The highly anticipated PUBG snow map has been leaked. The release date for “Vikendi” has been announced for both PC and console!

On launch day for PUBG PS4, the trailer for the long-awaited snow map, Vikendi, has been released. The trailer doesn’t show any gameplay, nor the map in any great detail, but serves as a promotional video for the new map.

The video confirms that Vikendi will be available on December 19 for PC players. Furthermore, it is available right now on the PC test servers. Console players will have to wait a little longer though. PUBG community managers on Reddit confirmed the snow map will be coming to PS4 and Xbox in January.

Moreover, the account that was behind the datamine has produced a video based on the obtained files showing what we could have in store. This video shows the map in astonishing detail. It should be noted that this is a recreation and may therefore not be 100% accurate.

A birds-eye view of the map has also been produced. It looks similar to the snow map that was leaked two months ago, perhaps providing evidence that this leak is legitimate. The map is expected to be 6×6 (km).

It appears that the Vikendi snow map won’t be released at the same time as PUBG PS4. It is speculated it will come in a patch shortly after. The official listing for PUBG PS4 states that the game comes with Erangel, Miramar and Sanhok, the three maps currently released.

When PUBG was first released it did so with one map, the iconic Erangel. This was followed by the desert map, Miramar, which was released in December of 2017.

Whilst the first two maps were 8×8 (Miramar has more land mass) the latest map to date, Sanhok, was a fraction of the size at 4×4. Sanhok was released in June, 2018.

All these maps have proven popular within various parts of the PUBG fan base. The decision to make the snow map 6×6 is likely to try and strike a balance between the previous maps. 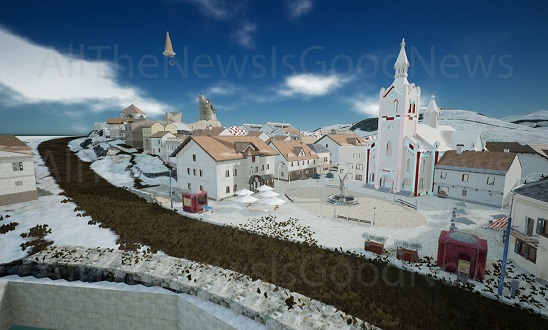 A built up area of Vikendi…

Given the multiple leaks and the fact the Playstation Store have it listed, we expect the videos above to prove pretty accurate when it’s finally released.