The first update for PUBG PS4 is available to download now. Update 1 will include a lot of bug fixes, an array of performance improvements and most notably, the addition of the PUBG snow map, Vikendi!

Update 1 for the PS4 version of PUBG, sees the introduction of the much anticipated snow map, Vikendi.

PUBG PS4 launched with the familiar Erangel, Miramar and Sanhok. These maps were 8×8, 8×8 and 4×4 respectively. Vikendi is the first PUBG map that will be 6×6.

Read More: Is using a mouse and keyboard on PUBG PS4 cheating? 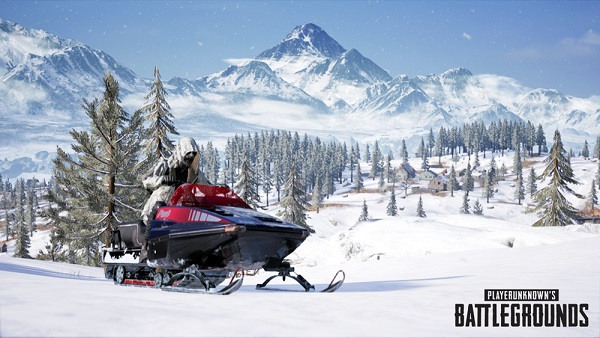 The new snowmobile in PUBG is exclusive to Vikendi!

Similar to PUBG Xbox, the PS4 version is getting several performance tweaks. These are almost identical to the Xbox version with the exception of an option for graphical settings.

The Xbox One X outputs PUBG in 4K whereas the PS4 Pro keeps it at 1080p. This is because the PS4 Pro doesn’t possess the hardware power the One X does. Furthermore, it could be because Bluehole wanted to stabilise the PS4 version as much as possible.

The graphical settings have been added to the Xbox One X to give users the option to prioritise performance over graphics.

In comparison to the Xbox update, the PS4 update has been received with greater optimism. Loading issues on Vikendi persist, whereby buildings and scenery are slow to load upon landing.

However, there is no mention of the buggy menus that the Xbox is plagued with. Furthermore, several PUBG players state that the first three maps, Erangel, Miramar and Sanhok, perform better since update 1.

The existing Supply system will be integrated with Survivor Pass: Vikendi on January 22.