The maintenance period for PUBG Mobile update 0.12.0 has now concluded. The latest update brings an array of new features – full patch notes below.

PUBG have released the full patch notes for the big PUBG Mobile 0.12.0 update. They are as follows:

– Survive Till Dawn is now under this mode

– More new modes will be added in the future

– Stay alive for one night while fighting zombies

– All teams that are still alive at dawn will win

Changes to Survive Till Dawn:

– Some zombies can now climb over low walls or onto roofs

– M134 handling has been tuned

– Zombies now move slower after being hit by firearms

– Daily missions can now be completed in Survive Till Dawn

– Players can now spectate matches that their friends, Crews or Clan members are currently in, and view others’ information while spectating as well as adjust Spectator Mode privacy settings

– Scope cros-shair colors can now be changed in settings

– Portable Closets can now be swapped while in a match

– Spring Theme and Treasure is now available. Each draw guarantees a unique reward, and Sakura Dacia or Pink Rose Set is a guaranteed drop when drawing 10

– Popularity has been added to Spaces. Players can now show their support by giving LIKEs to one another, and become Partners with friends that have 400 Synergy or more. Partners will appear in each other’s Spaces

– Automatic door-opening has been tuned

– Dynamic weather odds have been tuned

– More buildings have been added to Dino Park, Coal Mines and Goroka in Vikendi

– Crew Challenge qualifying round has been expanded, and top 10 teams now get unique outfits

– Added a reminder on dismantling duplicated items for Silver

– Previews are now available in some pages. Tap the reward icon to preview outfits

– Gallery now only show items currently in stock at the Shop

– Mythic outfit emotes can now be heard by more players

– Added haptic feedback to some buttons

– Animation for throwing grenades while prone has been tuned

– Fixed a bug where doors were not displayed properly

Tencent has announced that PUBG Mobile will be down from April 16, 12 am UTC (April 15, 5pm PDT) to April 16, 8 am UTC (1am PDT). The lengthy maintenance period is required to update the game to its latest version. 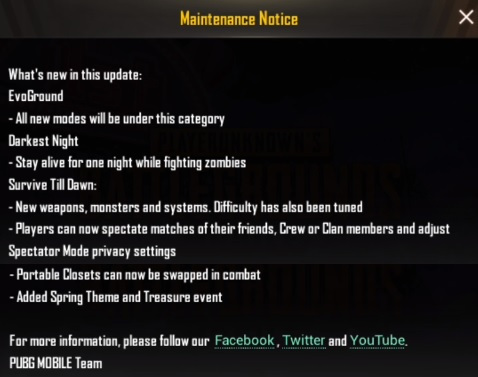 PUBG Mobile has been extremely well supported since its release. Updates have been frequent and Vikendi, the PUBG snow map, has even been added.

Players using external controllers aside, the game generally runs very well. However, lag has plagued the mobile version of PUBG and players are seemingly tired of it.

The new updates will be appreciated in some quarters but others want the core game to run well firstly. One Twitter user said: “Don’t give us new things.. Just fix the lag goddammit.”

Another took a shot at PUBG by saying they are waiting for Call of Duty to release a mobile game.

The overwhelming response though, was regarding the lag. Another comment took a more tactful approach, stating: “Just fix the lag issue want nothing more than that.”

There has been no mention from Tencent or PUBG about potential bug fixes in the 0.12.0 update for PUBG mobile.