PUBG’s 2019 season is set to have a structure unlike anything seen in the game’s history to go along with a massive $2 million prize pool for the Global Championship alone.

While Fortnite Battle Royale and Black Ops 4’s Blackout have dominated the conversation surrounding the battle royale genre, PUBG is still alive and well heading into 2019.

The new year will see PUBG reach new heights in the competitive scene as they have brought out all the stops to ensure that this will be the biggest season yet for the game.

Most notably, PUBG has named nine independent regions that will host their own competitions all throughout the year. Six of these regions will feature a ‘pro league’ structure, while the other three will operate on a ‘pro circuit’ basis with a series of tournaments instead:

All nine regions will be competing on a globally aligned calendar that will operate in distinct phases throughout the year. Phase 1 runs from January to March. Phase 2 runs from May to June. Phase 3 runs from August to October.

Sprinkled in the midst of these phases will be global events that will feature the top teams from each region. An All-Star game will also take place just before Phase 3 in August and will consist of a series of exhibition matches with a casual and entertainment focus. 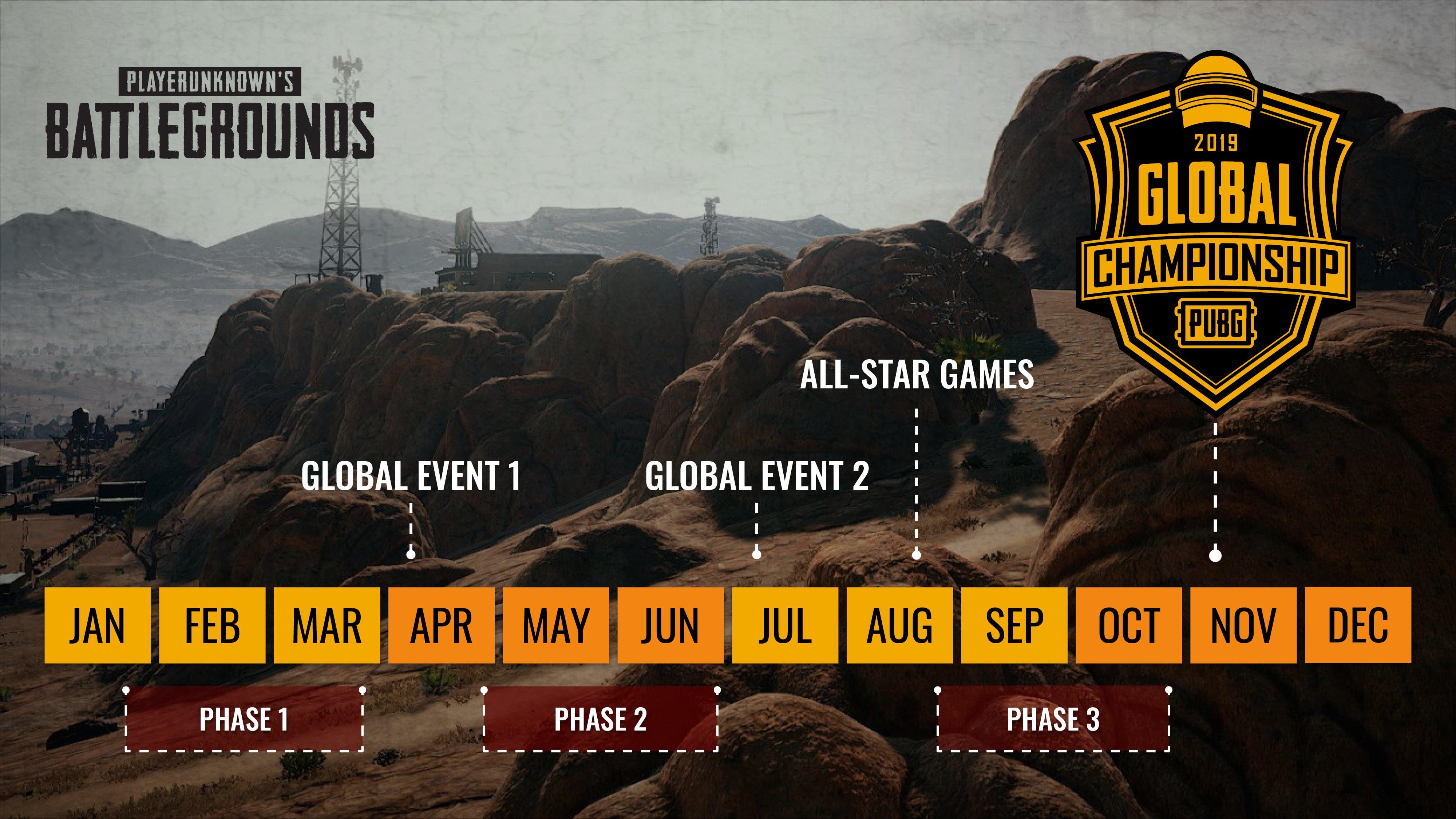 The entire year will then culminate with the Global Championship in November that will see the best teams from each region compete for a prize pool of “at least $2 million.”

The 2019 season will also be different from previous seasons in that there will be a universal ruleset across all nine regions to prevent any kind of confusion between competitions.

Every pro competition will place 16 squads on Erangel and Miramar in first-person perspective mode only. There will also be unified settings for esports games with unique blue zone settings and item drop rates for ultra-competitive play. Every event will also follow the same points system, which is being re-designed to find the perfect balance between competitive gameplay and an entertaining viewing experience.

You can read the full details for the 2019 PUBG season down below:

Get Ready for the 2019 Season of PUBG Esports

PUBG esports is about to get serious. Starting next year, we’re introducing official pro competitions in nine different regions around the globe. We’ll also be hosting numerous global events throughout the year, including the All-Star Games in August and the Global Championship in November where the #1 team of the season will be crowned. Read below to find out more!

In 2019, PUBG will recognize nine independent pro regions around the globe. Each region will have its own series of pro competitions that will bring the top regional talent together and give birth to the local champions.

Aligning the competitive calendar across all regions is critical for building a season-long narrative with distinct periods designated for local competitions and regular season breaks that enable sufficient time for global events featuring top teams from each region.

The 2019 season will be divided into three phases throughout the year. Phase 1 will begin in late January and last until the end of March. Phase 2 will begin in early May and end in June. Phase 3 will start in mid-August and end in mid-October. All regional pro competitions will take place during these predetermined phases.

Between Phase 2 and Phase 3, at the midpoint of the season, we will be hosting the All-Star Games. The most popular pro PUBG players from all over the world will be invited to a series of exhibition matches that will be differentiated from other competitions by their casual and entertainment-focused nature.

At the end of the 2019 season, we will be hosting the Global Championship, which will feature the best teams from each region who will duke it out for the ultimate chicken dinner. All nine pro regions will have an opportunity to send their regional representatives to this final showdown. The winner of the Global Championship will be crowned the undisputed champion of the entire season and take home a million dollars in prize money. We are exploring the possibility of adding other bonuses on top of the initial prize pool of 2 million dollars; more details will follow in the coming weeks.

We are also currently in discussions with industry-leading third-party organizers with the goal of creating other unique global events during breaks between phases, where the best teams from each phase will compete internationally. Stay tuned for more details about these global partner events.

From the feedback we received, one of the greatest pain points for professional players and viewers alike in 2018 has been the discrepancy in the rulesets adopted by different tournament organizers. The wild variance in the esports rules prevented players from scaling up their skills and strategies efficiently, and forced viewers to learn how to watch the games every time a different event took place.

2019 will see all pro competitions, whether regional or global, third-party or first-party, adhere to a standardised, universal set of rules. Every pro competition will place 16 squads on Erangel and Miramar in first-person perspective mode only. There will also be unified settings for esports games with unique blue zone settings and item drop rates for ultra-competitive play. Every event will also follow the same points system, which is being re-designed to find the perfect balance between competitive gameplay and an entertaining viewing experience.

More details on each regional competition and global events will follow in the coming weeks, so stay tuned!