It is widely accepted that Great Britain is the setting for the Nintendo Switch’s next Pokemon game: Pokemon Sword and Shield.

The reveal of the Galar region was one of the few bits of information included in the initial Pokemon Sword and Shield reveal.

Along with glimpses of the region via snippets of supposed gameplay in the first teaser trailer, a birds-eye view of the map was also showcased.

The image of the map as a whole has the shape of Great Britain. This, coupled with various landmarks throughout the map, only adds credence to the more than strong theory that the Galar region is indeed Great Britain. 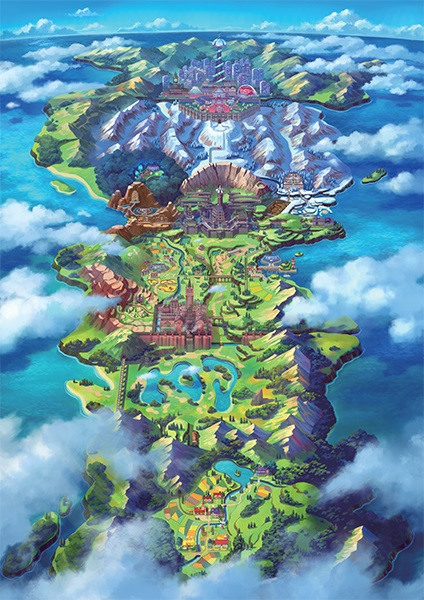 While the evidence is there in abundance, it still hasn’t been confirmed what the Galar region is based off of. There is the possibility that the Pokemon Company will leave it to our imaginations too.

We may not need confirmation though, as the below evidence makes it as obvious as it can be without needing an announcement.

One scene in the Pokemon Sword and Shield trailer shows a Pokemon-like figure on one of the hills. The hills are already reminiscent of the British landscape but animal outlines are also common place.

This provides further evidence that the region is intended to be Britain.

Okay so the more I look at the Galar region the more it looks UK based as opposed to Germanic, mainly bc of the hill figures, which are things you find on hills in England pic.twitter.com/snr8itN2SP

Elsewhere, in the part of the trailer where the industrialized city is shown, an old rusty bridge is part of the scene. The in-game rendition is very similar to a bridge in Castlefield, Manchester.

Interestingly, the same city as per the Galar region map has the Big Ben clock look-a-like. This suggests that the city is perhaps a hybrid of London and Manchester.

Hype for new Pokemon! That bridge in #pokemonswordshield is located in Manchester (in Castlefield), which makes me think that this city isn't London at all (except for Big Ben, a hybrid maybe?). Here's a photo I just took of the real bridge!
Is a similar one in London? pic.twitter.com/D7W37IVmxy

Additionally a similar structure to the London Eye is also visible on the birds-eye view of the map.

With all this evidence, there are just too many features to suggest it is coincidental. You can bet your bottom dollar that Galar is in fact Great Britain.