Pokemon Diamond & Pearl released in 2006 on the Nintendo DS. The Gen IV title introduced players to the Sinnoh region for the very first time and has become a fan favorite.

One of the series’ most popular characters, Cynthia, also made her debut in the game. However, the heroine recently was given a new Sygna Suit design in Masters and it has the community divided.

The beloved champion got a new design in Pokemon Masters.

According to the update, Cynthia’s new attire is called Sygna Suit and is based on her Dragon-type Pokemon Kommo-o. Her new look has her signature golden hair up in a bun, and her shirt has scale-like accessories hanging down.

Fans of the Nintendo series were immediately torn on the Champion’s new design. Over on Reddit, ‘Arrior_Button’ said, “I don’t like the design and her combo with Kommo-o. Her outfit looks more like a ‘cosplay.”‘ Another user compared her hair to beloved Animal Crossing character Isabelle: “She literally looks like Isabelle I thought this was a joke post at first.”

Over on Twitter, fans weighed in with similar thoughts such as ‘Heat_Rotom’ who tweeted, “I don’t like the new Cynthia, they killed her, I guess…” Another user stated, “I super don’t hate the idea of Sygna suits being cosplay it’s a fun idea! But Cynthia as a Kommo-0 is so ridiculous looking.” 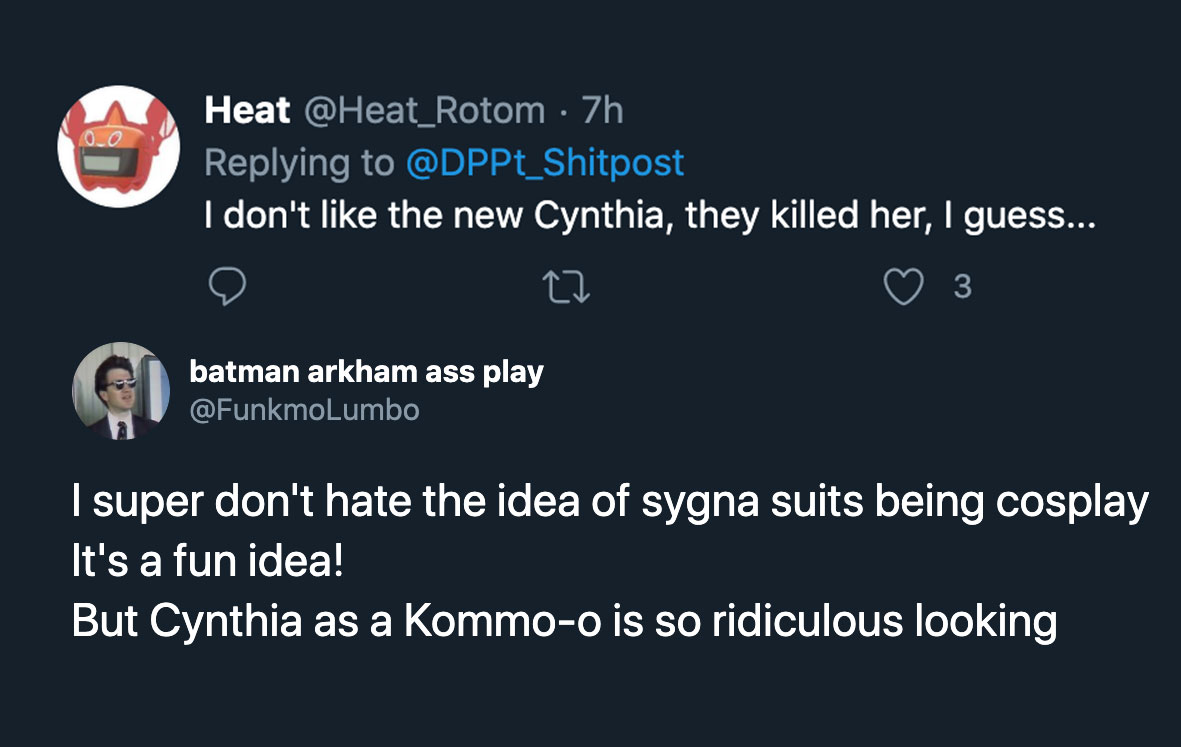 While some reactions were negative, other players loved her new look. ‘Togekissies’ tweeted, “SYNGA SUIT CYNTHIA oh my god i need her.” Pokemon fan ‘heartofdestiny’ agreed and posted, “Gotta say, I really like Cynthia’s hairstyle in her Sygna outfit.”

Not all Pokemon fans were down on the new outfit.

While it seems Cynthia’s new Sygna Suit is divisive among the community, some fans speculate that this could be her new design if they ever create a remake of Diamond & Pearl.

What do you think? Let us know how you feel about the Sinnoh League Champion’s new outfit on Twitter @PokemonSwordNS. Would you like it to her be new look in future titles?