A really strange new Pokemon card has been banned from use in the World Championships because it may lead to awkward situations in a multilingual setting.

The card, “Blaine’s Quiz Show” forces whoever used it to “put a Pokemon from your hand face down in front of you and tell your opponent the name of an attack it has. Your opponent guesses the name of that Pokemon, and then you reveal it,” the card’s stipulation reads.

Stéphane Ivanoff, whose Twitter states is the TCG NA International Champion 2018 and 2019, took aim at the card and began a campaign to get it banned from play.

It's 3 AM, time to launch my campaign to get Blaine's Quiz Show banned. pic.twitter.com/ebNeOAvC1z

The Pokebeach writer presented a scenario that may come when two international players face off and the card is used. “Here’s a simple situation: if I play Blaine’s Quiz Show at Worlds, using a French Pokémon card, should I announce the name of the attack in French or in English?”

“If it’s in French: unless my opponent speaks French, they probably can’t guess the Pokémon. Is this an intended effect of the card?” he asked. “If it’s in English: What if I don’t know the English name of the attack (since my card is in French)? Also, even if I know the name, what if my opponent doesn’t speak English (say it’s a Japanese player)?” 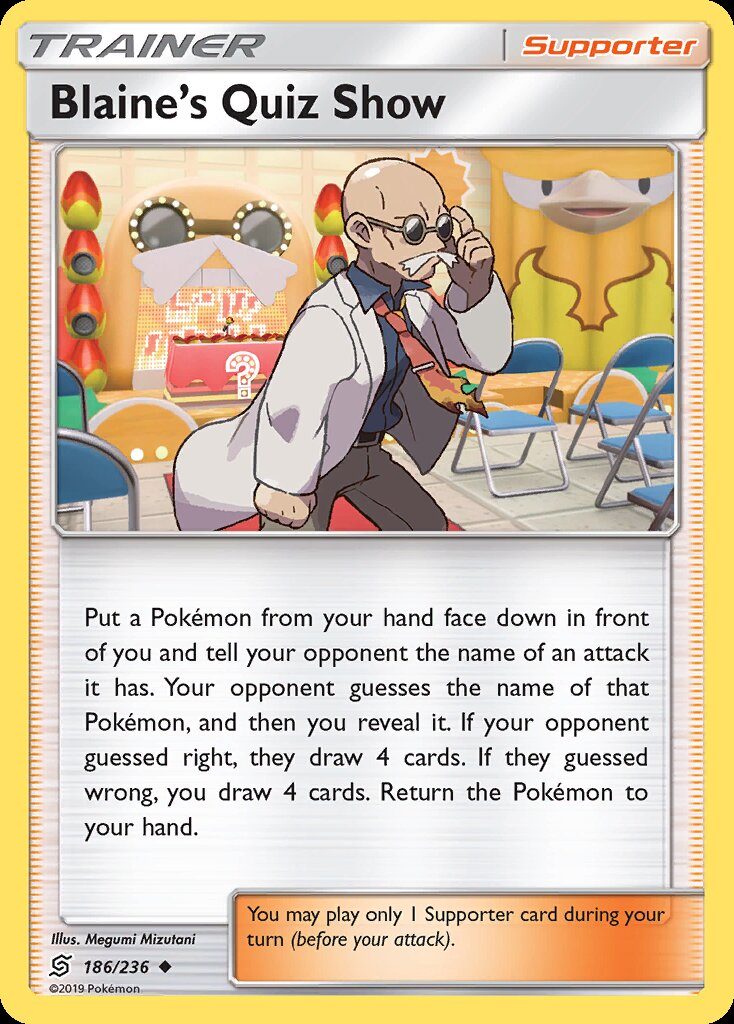 Pokebeach has since revealed in an e-mail to Japanese players that the card has been banned from Worlds and its side events. A public announcement will be coming very soon.

Ivanoff was happy with the announcement sharing a photo of the reported ban with the caption, “Strangely enough, mission complete.”