Whether you’re looking to melt your opponents with deadly attacks or just trying to soak up the warmth, these 10 best Firep-type Pokemon will definitely bring the heat to any battle.

Fire-type Pokemon have been one of the most popular types ever since Red hit our screen back in 1998. After all, these flame-loving Pokemon often have some of the coolest designs in the game. From gigantic dragons to world-destroying primordial Legendaries, there is no denying just how potent Fire-type Pokemon can be.

In fact, Fire-types like Charizard, Blaziken, Arcanine, and Heatran have all proved popular in competitive play thanks to their lethality. If you’re looking to dominate ranked battles with a sun team or just looking to add the strongest Fire-type Pokemon to your roster, then you can’t go wrong with any of these picks.

Entei bring the heat to any battle.

Despite its Legendary status, Entei has the lowest base states in our top 10 – maxing out at a not too shabby 580. If you’re after a pure Fire-type Pokemon, then you really can’t go wrong with Entei. The Legendary dog’s signature move, Sacred Fire is incredibly potent as it has 100 power and a 50% chance of burning the target.

To make things even better, Entei has some pretty impressive stats with a base attack of (115), HP (115), and speed (100). Consider teaching Entei Stone Edge, Extreme Speed, and Flare Blitz for a competitive moveset that will leave your opponents in the dust.

Houndoom is one scorching hot dog.

Houndoom’s high SP. Atk stat (110) and decent speed (95) enable this hellish hound to quickly sweep opponents. Dark-type moves like Nasty Plot raise Houndoom’s Sp. Atk even further, enabling it to hit even harder. While a competitive moveset consisting of Fire Blast, Dark Pulse, and Sludge Bomb will give you great coverage, it won’t make up for its lackluster defense.

Houndoom’s 50 defense can lead to a quick KO if you’re not careful, so you’ll only want to switch out to this Pokemon when you know you can outspeed your opponent.

Heatran is the only Pokemon that is a dual fire and steel-type.

Heatran has remained a staple Fire-type pick since Diamond and Pearl thanks to its dual Fire/Steel typing. Unlike most Pokemon, Heatran has an extremely well-rounded stat distribution. This means it can both tank a hit, dish out damage, and even outspeed average Pokemon.

Forcing fights is also extremely easy with Heatran, thanks to the use of its signature move. Magma Storm engulfs Heatran’s foes in a fiery prison, forcing them to take damage for four to five turns. During this time, moves like Toxic and Taunt can be used. Simply switch Heatran out and watch as your opponent’s Pokemon takes an insane amount of damage. 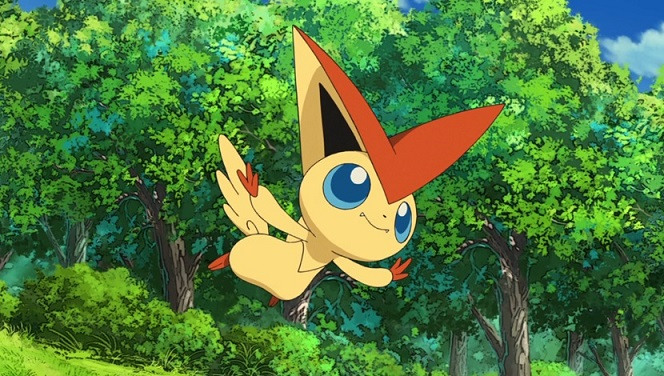 This cute critter may not look imposing when compared to the other Fire-type Pokemon on our list, but looks can be deceiving. Victini shares the same base stats as Volcanion, but instead of excelling at any, it has 100 points in every stat. When you combine this with Victini’s Psychic-Fire typing, you have an incredibly versatile pick.

For example moves like U-Turn, Bolt Strike, and Final Gambit ensure that you have plenty of variety when it comes to dealing with your opponent – an area pure Fire-type Pokemon can often struggle with.

Water is not super effective against Volcanion.

Mythical Pokemon have always been highly sought after thanks to their excellent move pool and high damage attacks. However, Volcanion is one of the most unique Fire-type ‘mons as it fuses both Water and Fire together. Because of this, Volcanion is completely immune to water-based attacks. In fact, its Water Absorb ability restores 1/4 of its maximum HP wherever it is hit by a water attack.

Due to Volcanion’s high defense stat (120), a lot of competitive players use it to safely apply and withstand pressure from squishy sweepers. For example, moves like Toxic and Substitute enable Volcanion to make a significant dent in most teams. If you’re after a tanky wall that can both withstand and dish out decent damage, then Volcanion is a great pick.

Blaziken’s fiery kicks can make short work of even the tankiest foe.

Blaziken may be pretty squishy due to its fairly low HP (80), but that doesn’t stop it from hitting incredibly hard. Just like Charizard, Blaziken is a fantastic sweeper that can tear through multiple Pokemon if given the chance. The Fire/Fighting-type Pokemon’s Speed Boost ability raises Blaziken’s speed by one stage at the end of each turn.

This is pretty potent considering Blaziken already starts off with 80 Speed. If Blaziken isn’t taken care of quickly, then it is not uncommon for it to completely outspeed every Pokemon that gets thrown at it. Combine this with the damage buff from Sword Dance and the lowered defense from Close Combat, and you have a recipe for success.

Charizard is still one of the most powerful fire-types.

This iconic fire-type Pokemon has been a fan-favorite in both casual and competitive Pokemon battles since the late 90s. While it may not be a Legendary Pokemon, that hasn’t stopped it from dominating the popularity polls. After all, it’s uncommon not to see a Pokemon team not utilizing this Fire-type.

Charizard has even greater potential now thanks to its Gigantamax form, which enables it to shine brighter than ever before. Speed is key in a lot of Pokemon battles, especially if you’re looking to quickly sweep your foes. Fortunately, this is one area Charizard excels in.

With a whopping 100 speed stat and 109 Sp. Atk, Charizard is capable of dishing out some particularly lethal attacks. The Pokemon’s damage can reach even greater heights when used in coordination with moves like Harsh Sunlight and Sunny Day, which buff all Fire-type moves.

Ho-Oh shares the same base stats as Reshiram, but it just narrowly misses out on claiming second place. This is partly down to it being vulnerable to popular rock-type moves like Stone Edge. However, despite its looks, Ho-Oh is incredibly tanky due to its high Sp. Def (154). It also has the highest HP (106) out of the top three Fire-type ‘mons, which makes it the perfect Pokemon to switch between when applying various statues effects.

Ho-Oh’s ability, Regenerator also enables it to restores 1/3 of its maximum HP wherever it is switched out. Moves like Toxic, Sacred Fire, Whirlwind, and Defog give Ho-oh tremendous amounts of utility, so consider using this Legendary bird if you wish to greatly shake up your foe’s game-winning strategy.

Dynamax Reshiram is a true terror on the battlefield.

Unlike Charizard, Reshiram is recognized as both Fire and Dragon. Pokemon’s Black’s flagship Legendary just misses out on the top spot, but that doesn’t mean it’s not worth adding to your roster. Having a 680 base stat total and an impressive Sp. Atk of 150, Reshiram is capable of pumping some truly dizzying damage numbers.

Flare Blitz and Outrage not only help to quickly cut through squishy Pokemon, they also enable you to both burn and confuse your opponents. Not only is this an incredibly potent combination, but it also enables you to remove even the bulkiest monsters from the battlefield.

Reshiram’s Dynamax form is also insanely powerful, thanks to moves like Max Flare. This attack both damages the opponent and leaves behind Harsh sunlight, which increases the damage of all Fire-type moves by 50%.

Groudon really knows how to crank up the heat.

This primordial Legendary boasts the highest base stats of any Fire-type Pokemon, delivering a whopping 770 total. Groudon is capable of sweeping even the strongest teams thanks to its potent attack (180), high Sp. Atk (150), and stalwart defense (160) stats. Because of this potent combination, Groudon remains a top pick for those looking to sweep their foe’s entire team.

There you have it, 10 of the best Fire-type Pokemon you should be using. Make sure you check out our Pokemon hub for all the latest news and updates.