The Washington D.C. Overwatch League franchise has responded to recent allegations of misconduct by team management.

One of the new additions to the league for Season Two, the D.C. team is already experiencing its first controversy, after it was alleged that General Manager Kate Mitchell had rescinded employment offers to potential players and staff.

The report came from Overwatch content creator and former pro player Michael ‘mykL’ Padilla, who has been reporting roster and team news during the off-season. Some of his claims have proven correct, while others have been denied or remain unconfirmed.

Most notably, he cited former San Francisco Shock analyst Harsha ‘harsha’ Bandi, who recently announced his departure from the Shock. MykL reported that this move came following a job offer by Washington D.C. which has since been withdrawn.

Mitchell herself initially responded to the report, stating that it was “riddled with errors, presented irresponsibly, and was posted without request for comment from the subjects.” She later said that she is “confident no wrongdoing occurred.”

Washington D.C. has now given an official response on the matter, responding to a request by Unikrn. The team backs Mitchell, stating that no official offers had been rescinded.

“We have an official process for making any offers to be part of our team as a player, coach, or in other capacity, which ultimately requires sign-off from the board. As such, while our GM has been speaking with many potential candidates for our team staff and roster, we did not make any official offers that were rescinded. We understand and respect the serious responsibility that comes with impacting people’s careers. Our staff is fully aware of our process and our organization’s values and have assured us that the situation has been mischaracterized.”

MykL, however, stands by his claims. In a series of posts on Twitter, he added that Harsha had “even put hours of work in for DC”, and stated that he would be gathering proof to back up his version of events. 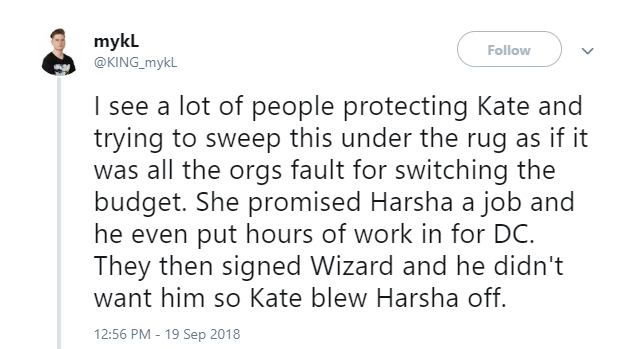 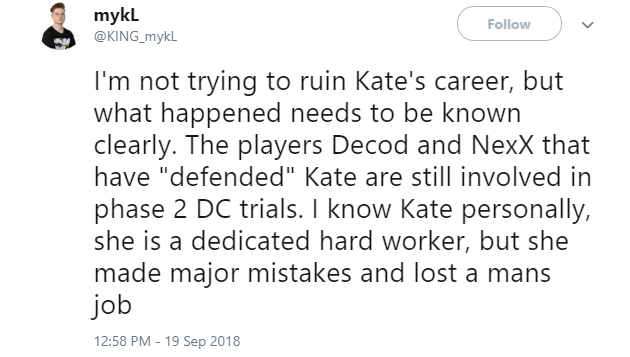 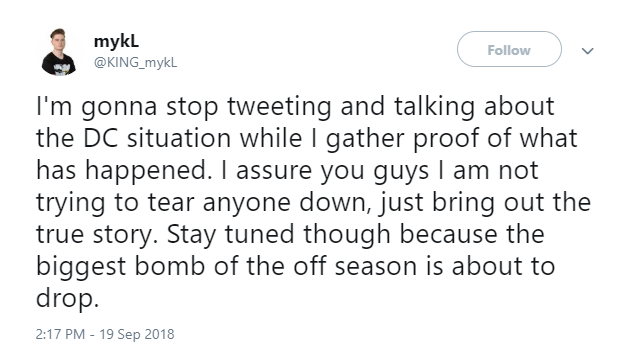