In celebration of the new D.Va animated short and Busan map, the Nano Cola Challenge offers players the chance to unlock D.Va-themed cosmetics until September 10.

Part of the Nano Cola Challenge requires players to tune into partnered Overwatch streams to earn some of the D.Va sprays, with up to eight hours of total viewing to unlock all of them. Seagull kicked off the challenge as the first partnered streamer on August 28.

Seagull might be Overwatch’s most popular streamer, but this broadcast was exceptionally popular even for him. The stream peaked at more than 100,000 viewers, and by the end Seagull had garnered more than 7000 new subscribers and around 60,000 new followers. 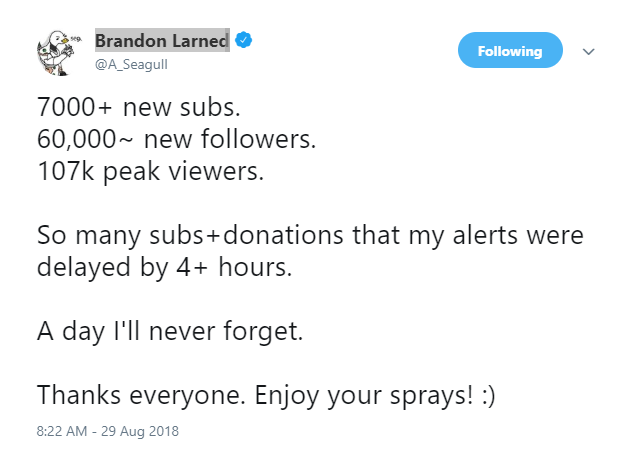 Overwatch director Jeff Kaplan even made a cameo, first to demand that the stream hit 100,000 viewers and later to congratulate Seagull on achieving it.

Seagull recently announced his retirement from professional Overwatch, having competed for Dallas Fuel in Season One of the Overwatch League. He cited the stress of competing in the league and a desire not to neglect his significant fan-base as major motivators for the decision, and so far it seems to be working out well for him.

More details about the Nano Cola Challenge and the schedule for the upcoming partnered streams can be found here.