The move comes after Boston Uprising completed an undefeated regular season in Stage 3, setting several league records along the way, although they were unable to take the stage playoff title as well following a loss in the finals to New York Excelsior.

Despite their success, the Uprising apparently felt a change was necessary, making the following statement regarding Crusty’s departure:

“Today the Boston Uprising have announced the departure of Coach Dae-hee “Crusty” Park. Following internal conversations with Crusty and our staff in recent weeks, it became apparent that a change was in the best interest of the team, as well as Crusty. He was granted permission to explore new opportunities and will join the San Francisco Shock prior to the beginning of Stage 4.

Crusty has been an instrumental part of the Uprising coaching staff and organization as a whole. We’re grateful for the dedication and effort put forth by Crusty during his time here. We’re happy to have helped him find a new home where he can continue to thrive.”

In a personal statement relayed by esports insider and translator Robin311 on Twitter, Crusty revealed that the decision had in fact been made prior to Stage 3. 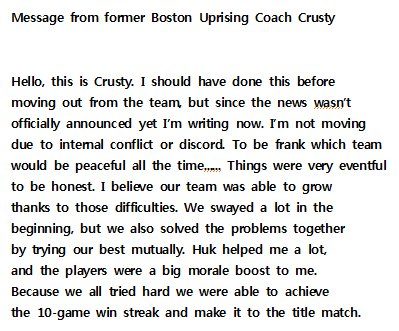 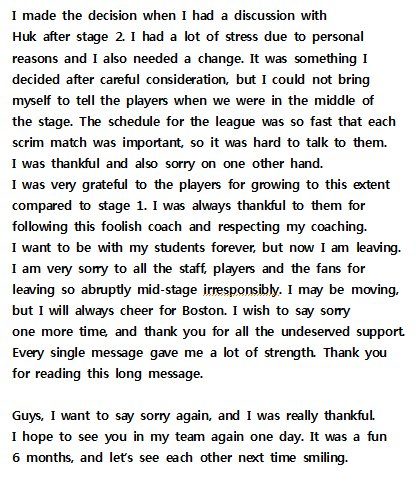 Boston Uprising has not yet announced a replacement head coach.

Both teams will be back in action in Stage 4 of the Overwatch League, beginning on May 16th. The five-week stage will likely be the end of San Francisco’s season as they are too far off the pace to hope for a playoff spot. The Uprising, meanwhile, currently sits in second in the overall standings and are almost certain to be competing for the Season 1 trophy.