Halo originally reported the rumor that Dafran could either be joining a Contenders team or possibly the new Atlanta Overwatch League franchise, and mykL later corroborated the news, stating that he had confirmation that Dafran had reached out to multiple Overwatch League academy teams. 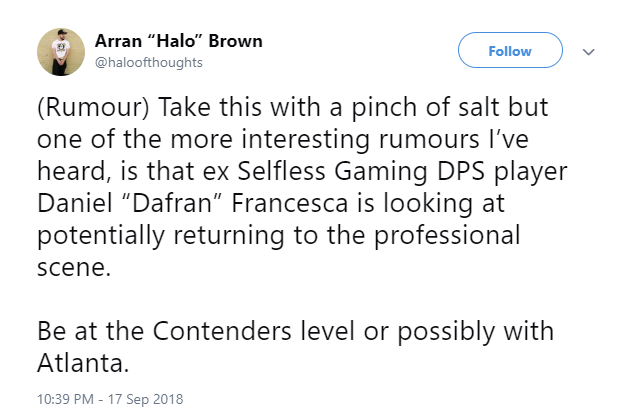 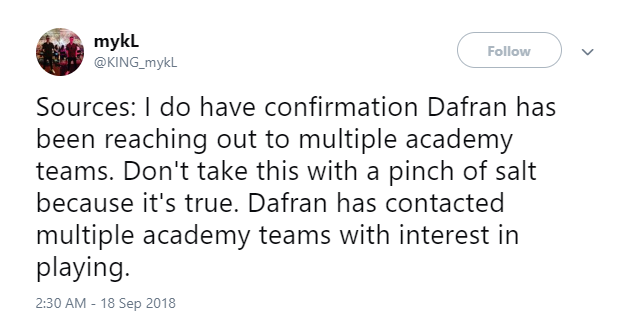 During a recent stream, Dafran himself confirmed the possibility that he could return to competition, stating that he would update his fans once he had more news.

Dafran originally made a name for himself as part of Selfless Gaming in the pre-OWL era, establishing himself as one of the top players competing in North America. His professional career originally came to an end, however, after he was suspended for throwing games and griefing in ranked play.

Dafran later announced that his behaviour had been an attempt to escape professional play, which he said made him “very depressed and bored.” In a statement announcing his retirement in July 2017, Dafran said that he “would much rather jump from job to job than be a professional player, it is simply not something I enjoy and want to do in the future.”

Dafran’s popularity has meant he hasn’t needed to jump from job to job, however, instead becoming one of Overwatch’s most successful streamers. The landscape of professional Overwatch has also changed significantly with the arrival of the Overwatch League.

There is currently an exclusive free agent signing window for the eight expansion teams, allowing them to start building their rosters without competing with established teams for players. From October 8, all teams will be able to sign free agents, and by December 8 all must have at least eight players.