An update on the Overwatch Public Test Realm has hinted that several OWL teams will be getting new skin colors for purchase as well as in game for the league’s third season.

On Reddit, a user by the name of DocterrificDoc highlighted that the Florida Mayhem, Los Angeles Valiant, and San Francisco Shock skins have been relabeled to ‘2018’ and are no longer available to buy.

All the other skins are available for 100 league tokens, which include home and away variants, and do not include the ‘2018’ label. 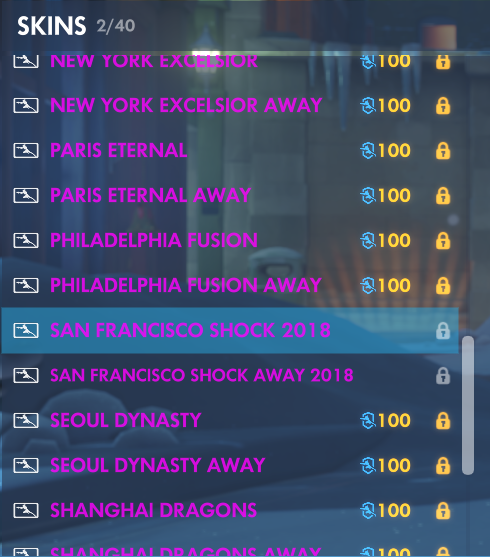 Skins labeled “2018” cannot be purchased on the PTR.

Evidence had surfaced that the three teams would be rebranding their color schemes with the Mayhem’s being the most radical shift in tone.

On Twitter, the Valiant tagged Overwatch League after their page on the website seemed to be updated earlier than planned to include the new baby blue colors.

As some of pointed out, the Shock’s logo appears to have done away with the gold, and replaced it with a hint of silver or light grey.

Finally, the Mayhem, who made waves when their tech-styled alternate jersey was unveiled mid-way through the 2019 season. A purple variant of their logo also appears on the bottom of their website, suggesting that they will be trading in the yellow for a more Vice-style.

It’s unclear if anyone who already owns Mayhem, Valiant, or Shock skins will automatically be given the newer versions, or if they will be required to repurchase them.

The Overwatch League skins are currently the only skins in the game that can be acquired through real world currency and not loot boxes, though they can also be earned by watching the League on Twitch with a Battlenet-linked account. 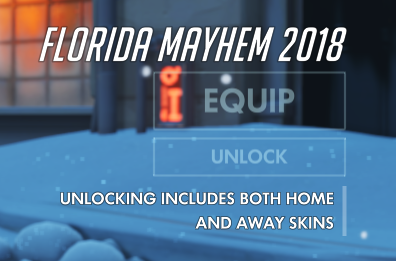 Could the Mayhem be gearing up for a change of colors?

It will be fun for players to see new skins in action for the upcoming season, and if this will also result in new jerseys hitting the market in the near future.

The third season of the Overwatch League kicks off February 8 with events in New York and Dallas.