NYXL had an uncharacteristically poor performance in the Overwatch League and the reason may not have had anything to do with the game.

Following a match against the San Francisco Shock, the Excelsior’s Tank Don-Gyu ‘Mano’ Kim gave an interesting post match interview, saying the only thing that can stop NYXL is their own team in a “bad condition.”

Mano had a big smile on his face in the interview, maybe because the team is undefeated, or maybe because he knew the struggles some of his teammates were dealing with.

Last year’s MVP JJonak got right to the point after the match, letting everyone know in not so subtle terms how he felt.

“I had to take a shit really bad on first round,” said the NYXL star.

GGs @SFShock I had to take a shit really bad on first round..

JJonak was not alone in his stomach issues, as Libero gave more information and the cause of NYXL’s mysterious problems.

“I didn’t think the fire noodles I had yesterday would cause a stomachache and affect today’s match,” said Libero through translation. The translation was first performed by reddit user Evenstar6132, before being confirmed by Dexerto through Google Translate. 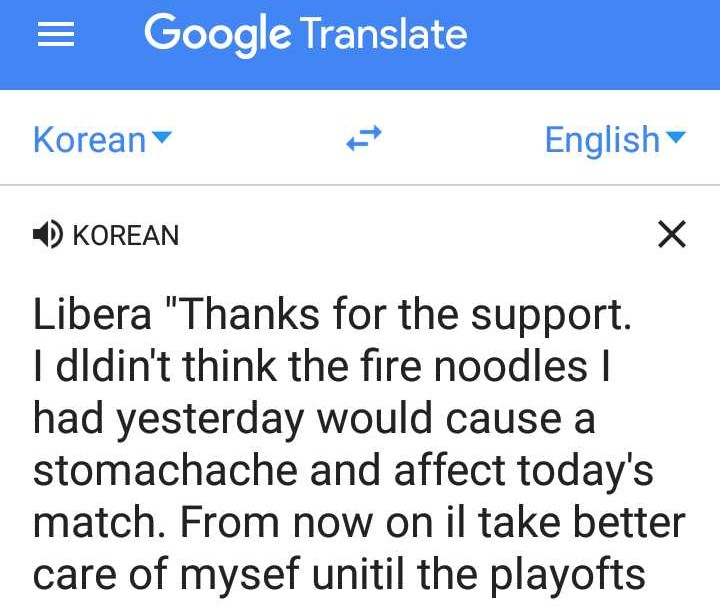 Watch out for spicy noodles.
400

NYXL won 4-0 but each map was closer than expected, with all of them falling within one point margins. Now we know it is because they all had to poop really bad after chowing down on fire noodles.

They move to 7-0 on the season and are first place in the OWL after concluding their Stage 1 matches. The NYXL diet may change for the Stage 1 playoffs at the end of March.