The new Overwatch League franchises for Toronto and Atlanta have announced additions to their coaching staff.

The Toronto team announced that Lee ‘Bishop’ Beom-joon would be their head coach. Bishop most recently coached London Spitfire to their Stage 1 title during season one, success they wouldn’t replicate until the playoffs at the very end of the season, and previously coached the North American Cloud9 roster.

Toronto previously made headlines with the announcement that former Canadian Olympic Committee CEO Chris Overholt would join as CEO and President. It was also recently announced that Jaesun ‘Jae’ Won, formerly of NA Player Management and Partnership Relations at Splyce – who will be operating the Toronto team – would be General Manager. 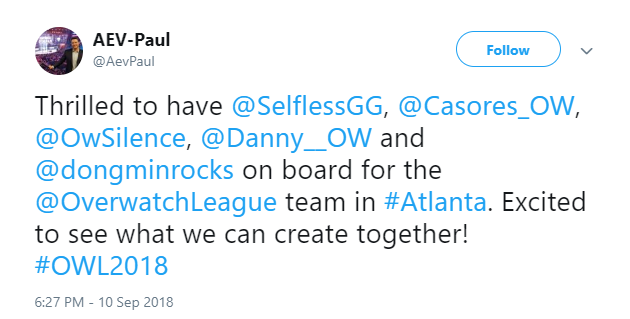 Toronto and Atlanta are two of the eight expansion teams joining the Overwatch League for Season Two. So far none of the teams have made roster announcements, with free agency only beginning on September 9.

Expansion teams will have an exclusive window until October 7 to sign free agents, after which all Overwatch League teams will be able to sign players. Teams must have a minimum of eight players by December 8.

No schedule has yet been announced for Season Two of the league, but it is anticipated to begin in early 2019. Pre-season show-matches may take place in December 2018 if the league follows a similar format to Season One.