Fans were left stunned after New York’s acclaimed coach parted ways with the team, but according to Overwatch content creator Michael ‘mykL’ Padilla his new post will be a promotion to the position of head coach with one of the expansion teams for Season Two.

MykL also claims that though WizardHyeong had multiple offers, he chose to go with the one that offered the biggest pay check.

Sources: Washington DC have signed Wizardhyeong the Typical Genius as their Head Coach. Wizardhyeong was primarily looking for a big pay check. Multiple teams wanted him, but ultimately he went with the biggest offer.
More Info can be found in my videohttps://t.co/zJKKzNIqOu pic.twitter.com/PJgj43yxDu

mykL recently revealed the addition of Koo ‘xepheR’ Jae-mo to Florida Mayhem, which has since been confirmed, along with two more players which have not yet been announced.

MykL’s claims were additionally backed up by anonymous “leaker” @RealLeakBoy, who further claimed that Washington and Vancouver were in a bidding war for WizardHyeong and he had turned down the Shanghai Dragons despite an offer in excess of $150k. 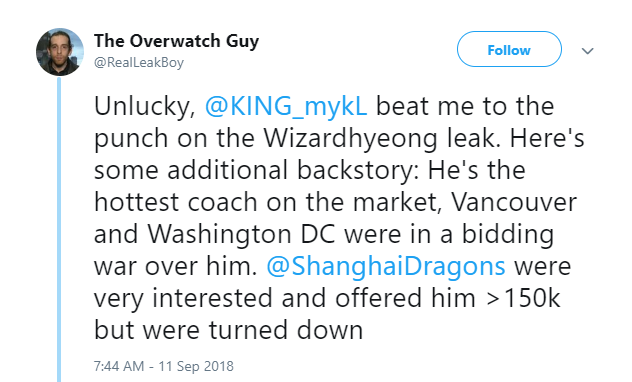 RealLeakBoy has reported on a variety of roster and team staff news in the off-season, much of which has yet to be proven one way or the other. While he correctly identified several of the new expansion teams along with some confirmed roster moves, his claims have also been incorrect in some cases.

WizardHyeong, however, denies that any move has been finalized, directly contradicting the claims that he has signed with Washington D.C. and refuting mykL’s claim that he was simply seeking a pay check by stating that he has already turned down the biggest offer he’s received. 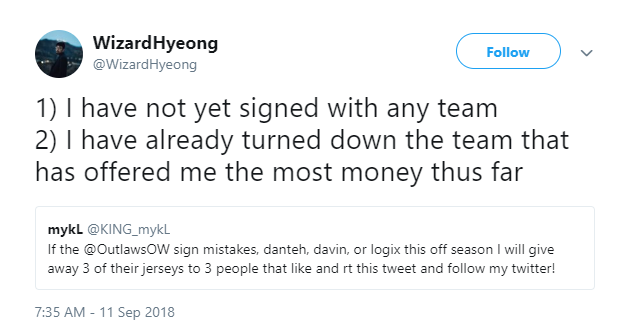 Shortly after parting ways with New York Excelsior, WizardHyeong announced that he was no longer looking for a new team, implying he had already found a new home. His most recent statement on the matter suggests that while he has options on the table, he’s yet to finalize negotiations.