The saga of the Toronto Esports club in Overwatch doesn’t seem to be going away as a lawyer representing some of the team’s former player’s called out the organization’s owner on Twitter for allegedly not paying them.

To make a long story short, after being told by Blizzard in November of 2018 that the team would have to rebrand to continue competing in Contenders because of the new Toronto Overwatch franchise; instead, Toronto Esports chose to stop playing Overwatch all together.

The owner of Toronto Esports, Ryan Pallet even went back and forth with other esports industry figures for a few days over the move, which provided plenty of drama to the Overwatch community.

After their highly publicized exit from the game, Toronto Esports dropped their Overwatch players and have allegedly failed to pay some of them the money they were owed.

On March 29, attorney Ryan Morrison of Morrison Rothman LLP, who is representing several former Toronto Esports Overwatch players against the organization, slammed Pallet on Twitter for failing to pay his players.

“Just had an owner who refuses to pay his former players call me a leech and say that “there is no need for you in a civilized society,” Morrison wrote. “Yes, you are correct. Thanks for keeping me in business, evil owner :)”

Morrison then went on to call out Pallet by name and confirm he was talking about him and the Toronto Esports situation.

“Guys please stop asking who this is,” Morrison said in a follow-up tweet. “It would be unprofessional to let everyone know it’s Ryan “Ramsey” Pallet from Toronto Esports.” 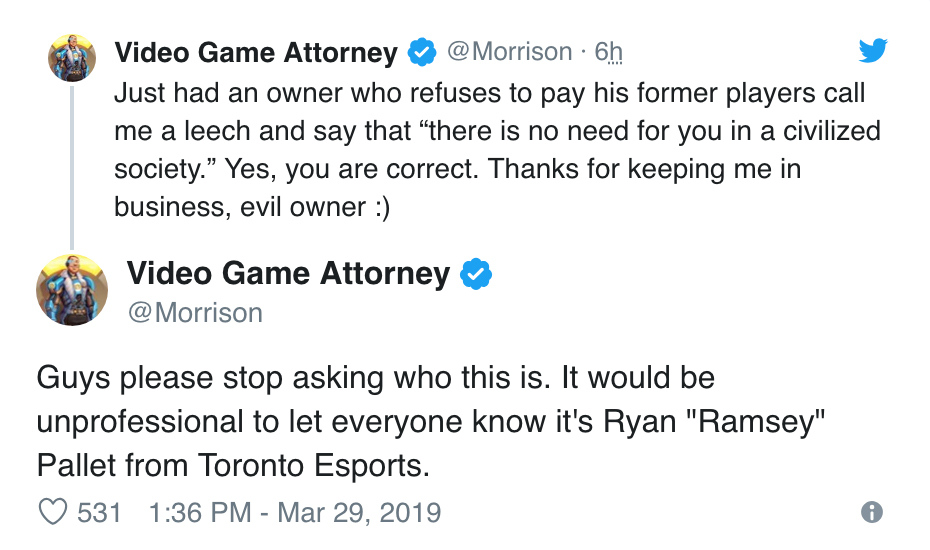 What happens next with Toronto Esports?

Just how much money the former players are owed is unknown, but it seems with lawyers getting involved the matter is definitely headed to some kind of resolution.

Since leaving Contenders behind Toronto Esports don’t appear to have competed in any kind of esport, based on their Twitter.

Pallet has yet to comment on any of this at the time of writing, and the Toronto Esports Twitter hasn’t gotten involved either.

Contract disputes have been common in esports lately and how the latest chapter in the Toronto Esports story plays out will certainly be interesting to watch.