For some reason, the manga/anime JoJo’s Bizarre Adventure is a popular source of memes in the Overwatch community, and one artist decided to bring the two together at last.

JoJo’s Bizarre Adventures, for the uninitiated out there, was first published in 1987 and is one of the best-selling mangas of all time, an animated series debuted in 2012 and has since become an instant hit among fans.

Without going into what JoJo is about, that would take another story entirely, the series features an almost endless amount of colorful characters that have become wildly popular with fans.

Chinese artist and Overwatch fan 爽朗系男子T (Sleek man T) decided to take several character from JoJo and put them into highlight intros for various Overwatch heroes, and the results are fantastic. 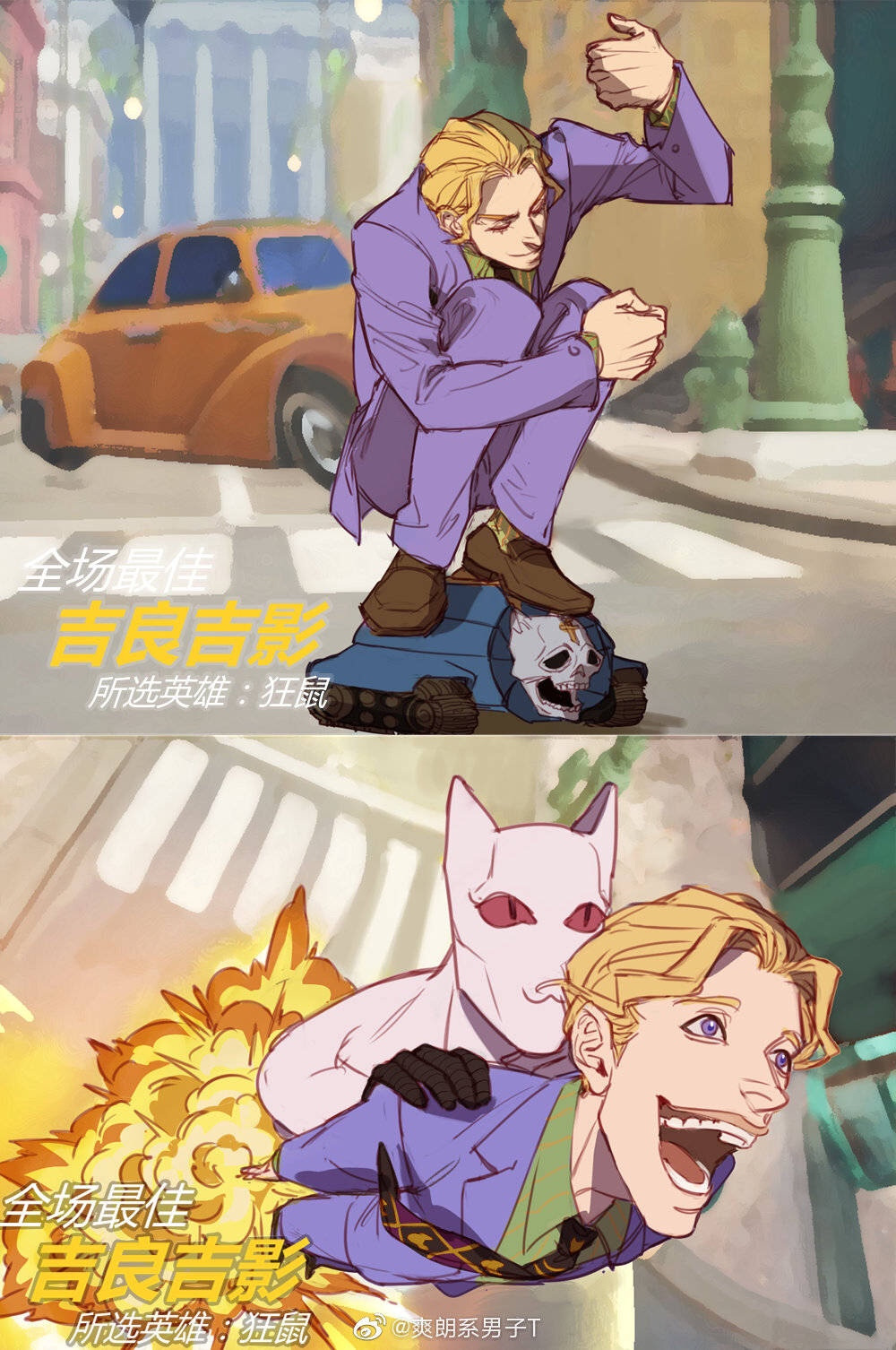 Kira appears in the JoJo series Diamonds are Unbreakable, where he’s a serial killer and the main antagonist.

Which makes him a perfect fit for Junkrat who is also a psychopath, but not quite a serial killer, as far as we know.

Kira’s ‘Stand’ (an entity psychically generated by its proprietor) Killer Queen is also featured in the images in tank mode and on the character’s back in the second intro image. 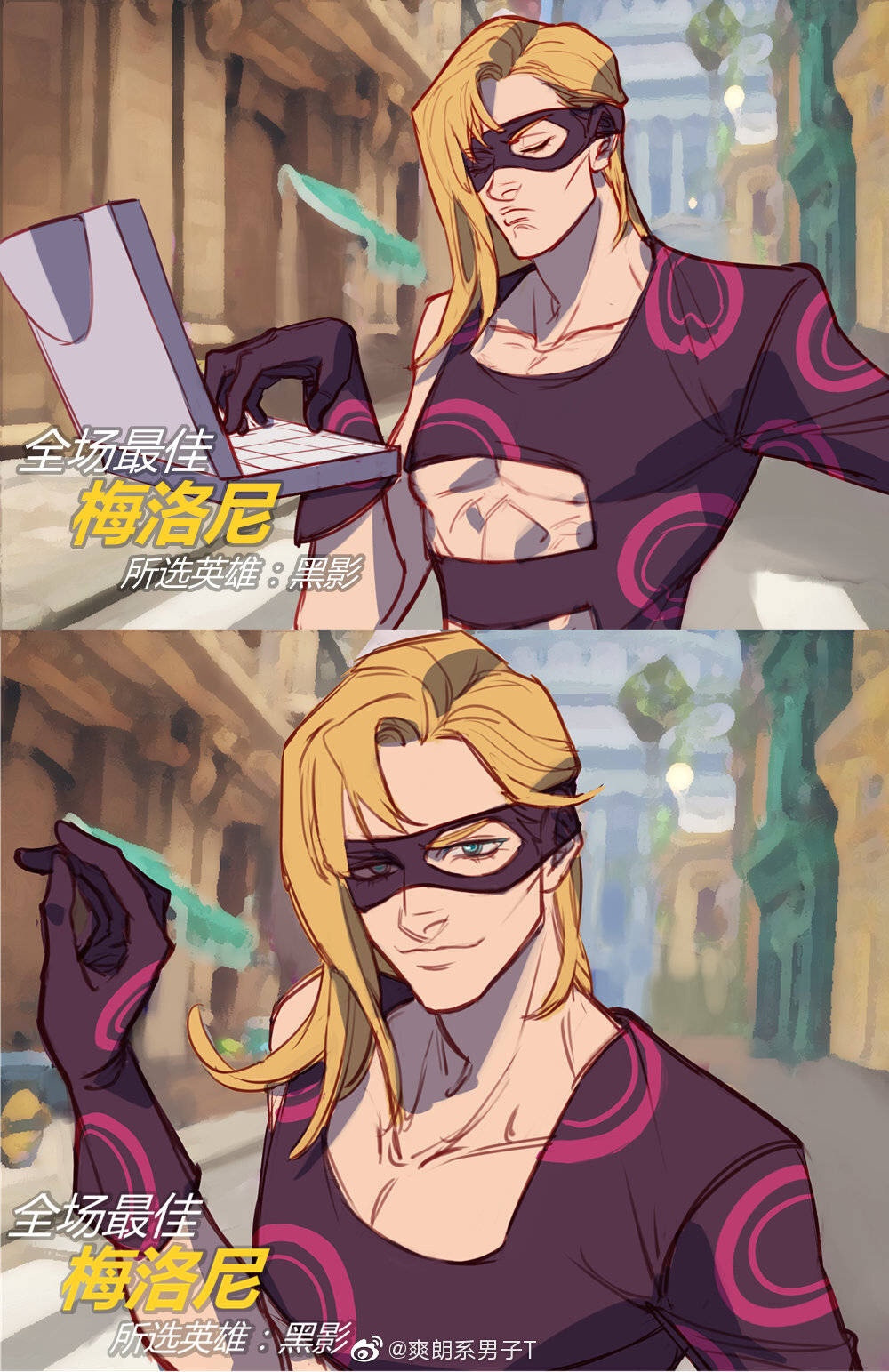 Melone is a minor antagonist featured in the Vento Aureo JoJo arc and like Sombra, he likes to use hit-and-run tactics against his opponents.

His outfit, like Sombra again, is also purple which really pulls the whole concept together. Plus, a large muscular man doing Sombra’s poses and face is hilarious. 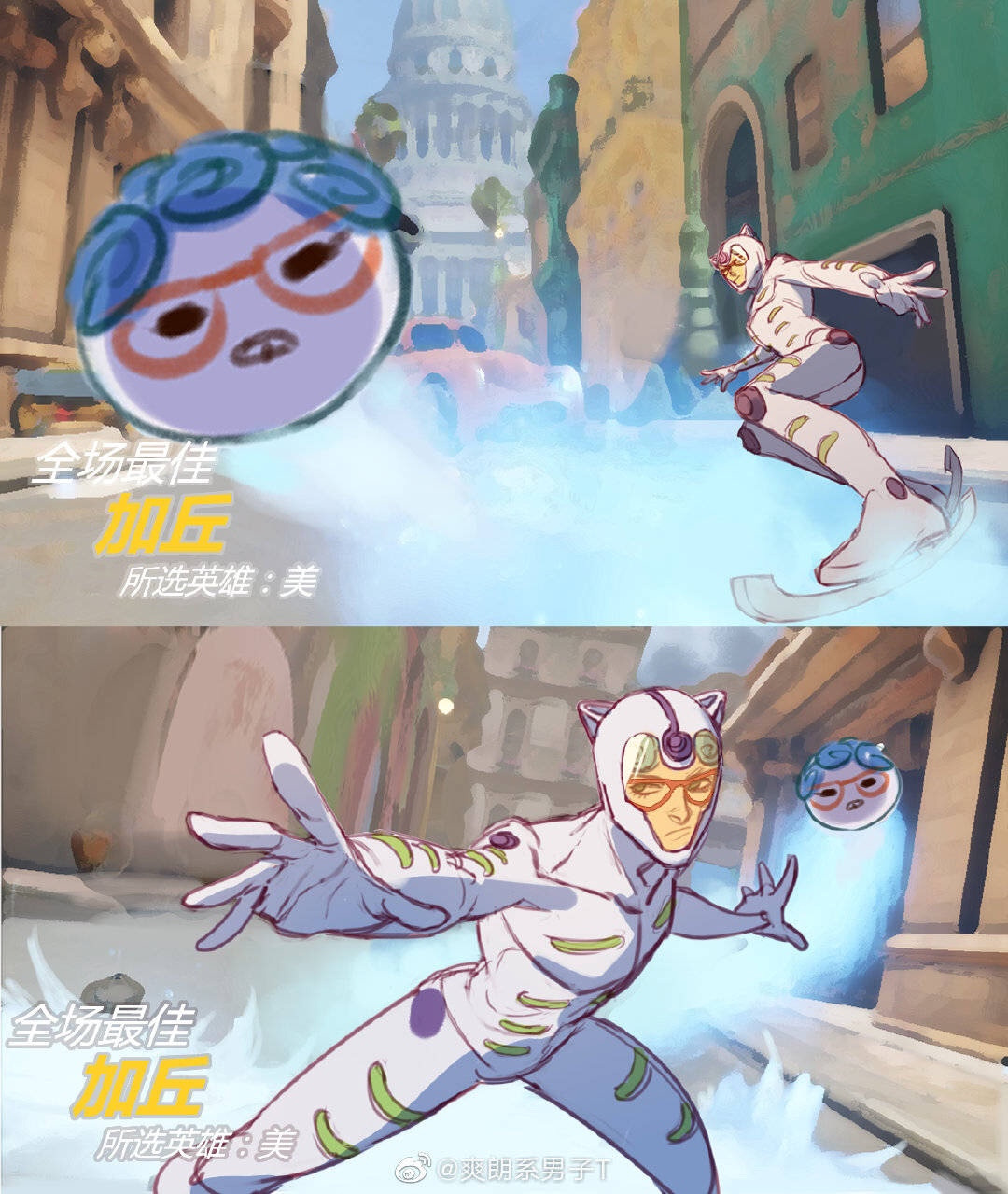 Ghiaccio is a natural Mei.

It would be tough to find a more perfect pair than Mei and Ghiaccio, a character in JoJo who has the ability to freeze things around him.

Thanks to the Overwatch Workshop update, one ambitious user has made a mode where Mei can slide along on the trail of her ice blaster, just like Ghiaccio. 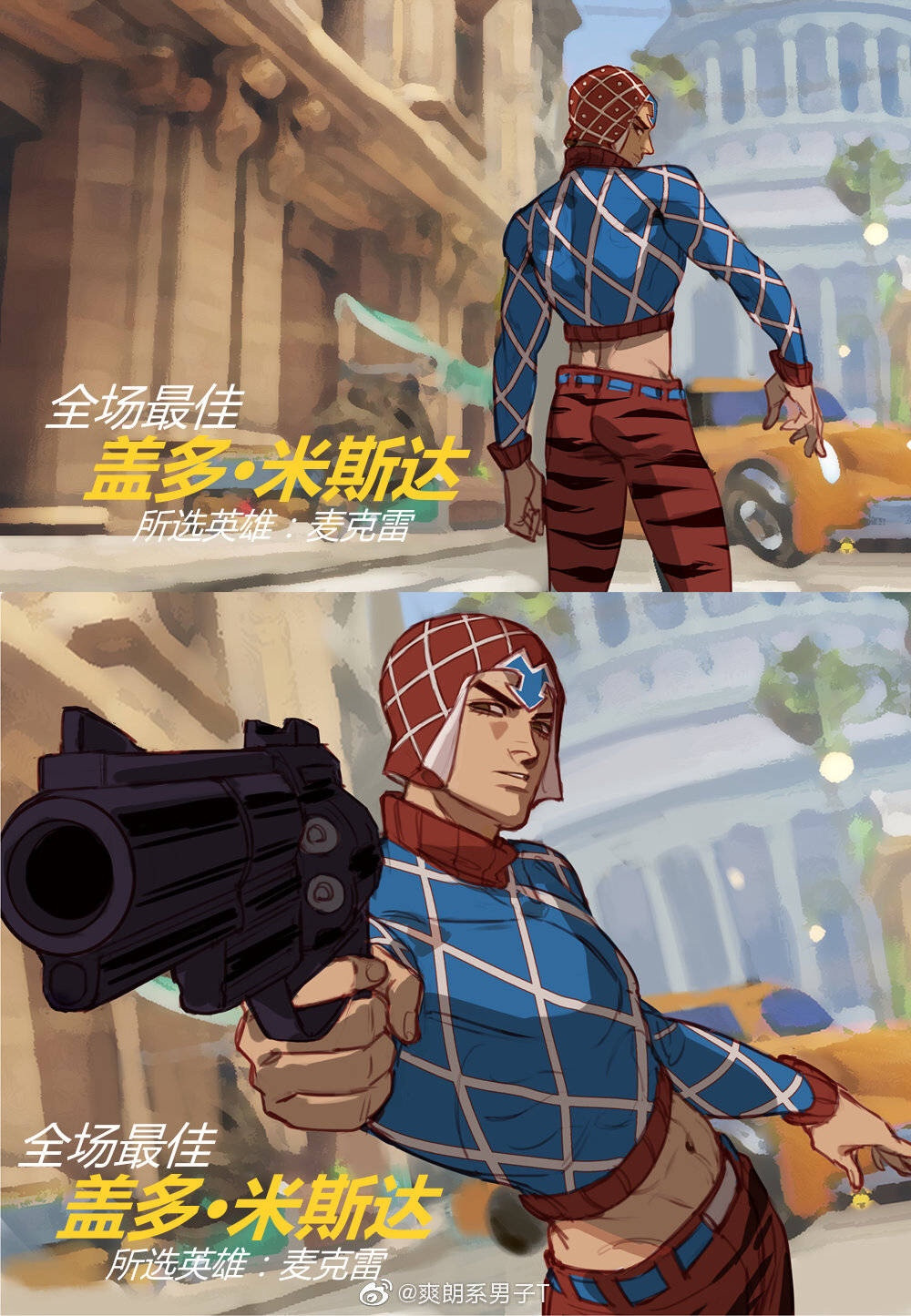 Like McCree, Mista is a gunslinger who gets rid of enemies with his ‘Sex Pistols’ instead of McCree’s Peacekeeper.

There are probably plenty of Overwatch fans who would love to see McCree get a Guido Mista crossover skin to make the meme come to life. 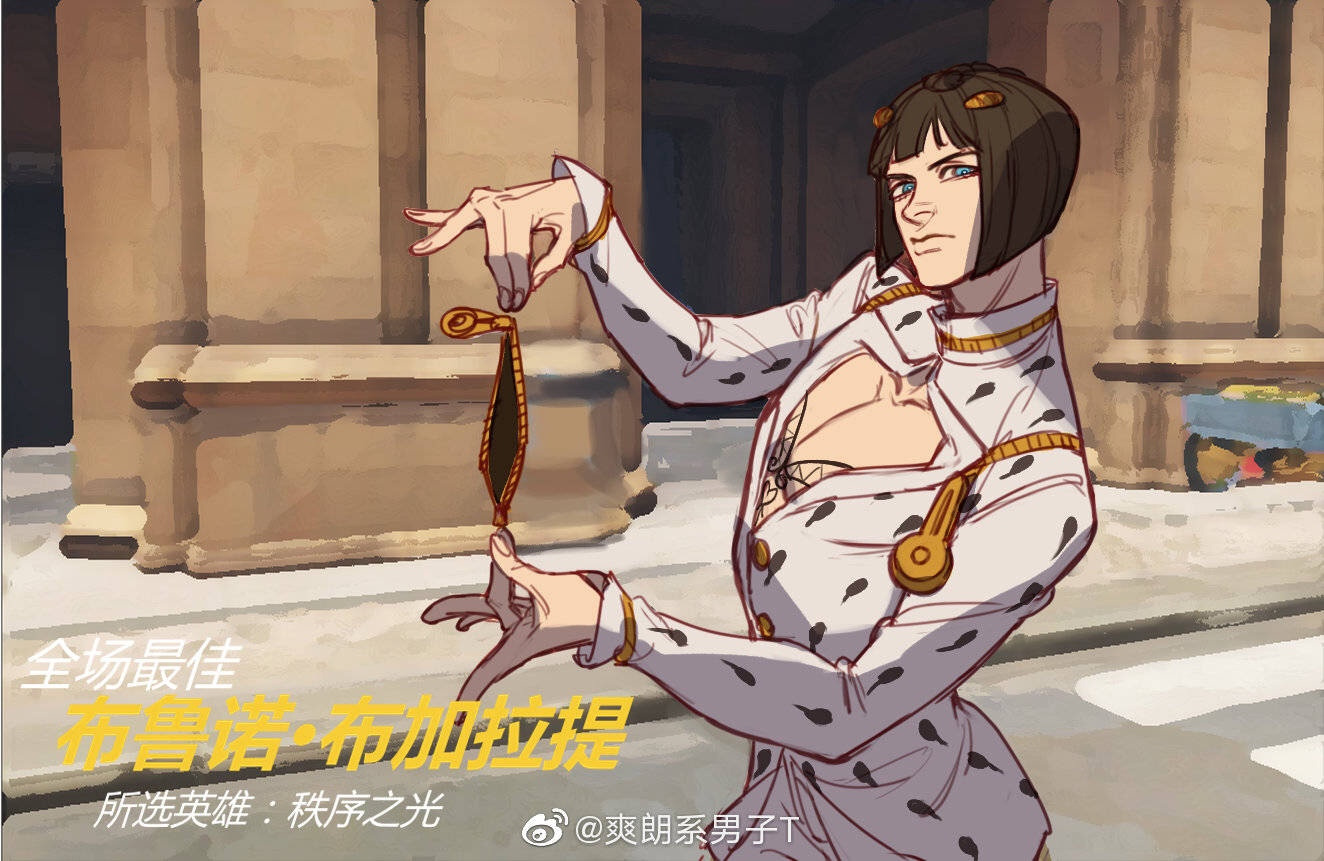 Bucciarati is a great choice for Symmetra because he’s able to use zippers in order to get through walls/surfaces similar to Symmetra’s teleporter.

In the highlight intro, Sleek man T even has him holding one of his zippers in a parody of Symmetra’s heroic intro. 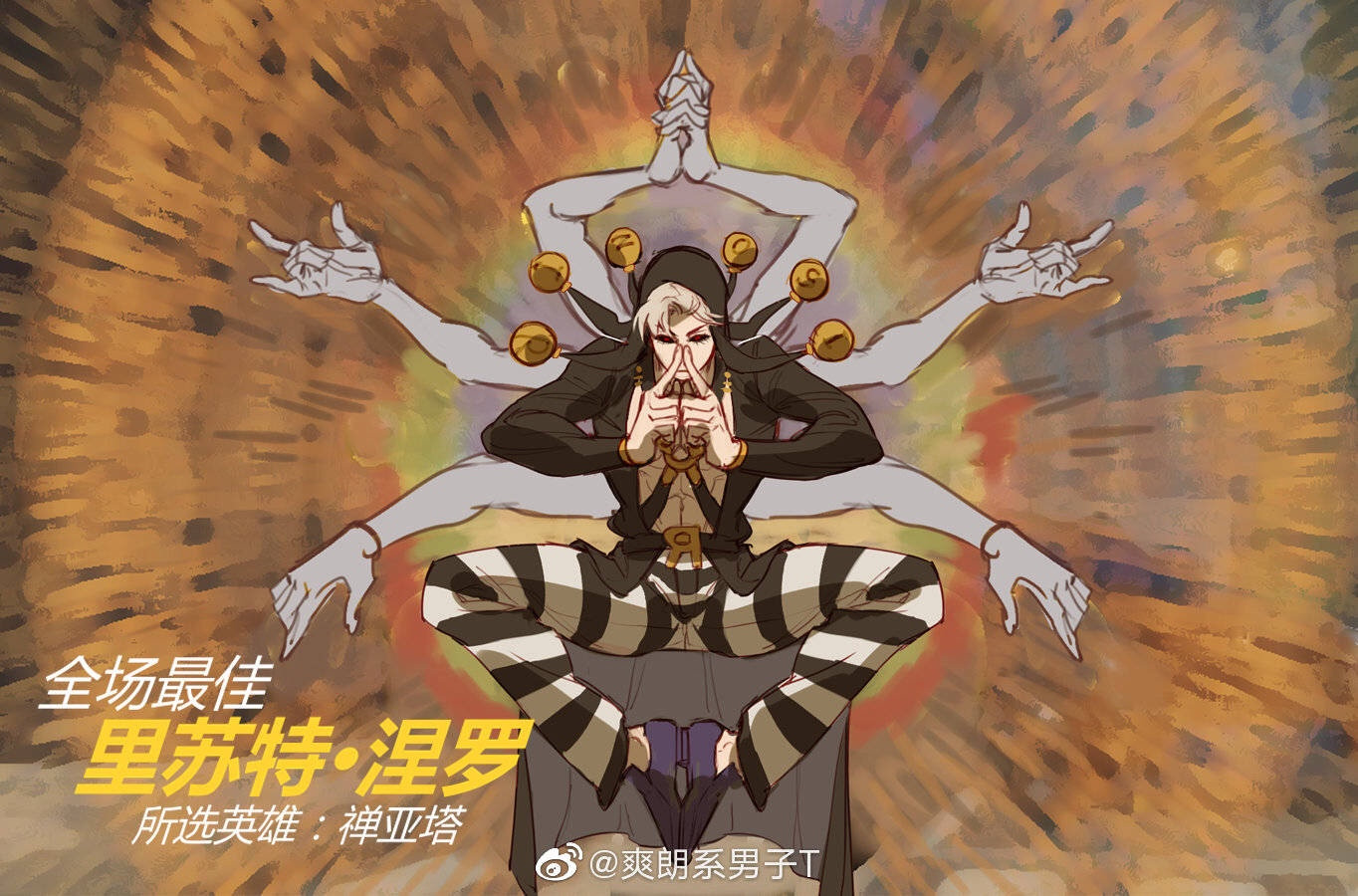 Finally, Risotto Nero, another antagonist featured in the Vento Aureo story arc, has been put into Zenyatta’s highlight intro.

Risotto is able to manipulate metal at close range, like a less-powerful Magneeto, to fight opponents. While it may not be an ability shared by Zenyatta, the Omnic Monk does use his metal orbs to generate energy to fling at his opponents.

You didn’t actually think Zenyatta threw his orbs, did you?