It probably won’t rival the Ultimate Legends drop that featured the likes of Michael Vick and Lawrence Taylor, but the April 13 edition of the weekly Saturday program certainly shouldn’t be dismissed as a multi-purpose strong safety and fan favorite wide receiver saw massive upgrades Saturday.

Both Ed Reed and Randy Moss have dominated the meta for large portions of the Madden Ultimate Team season upon their respective releases, and it’s fair to suggest the newest 99 overall items will be a boon for PS4, Xbox One and PC users.

And for once, the limited-time item isn’t so shabby either, as Steve Young could replace the likes of Michael Vick, Lamar Jackson or Cam Newton for a select minority of people. 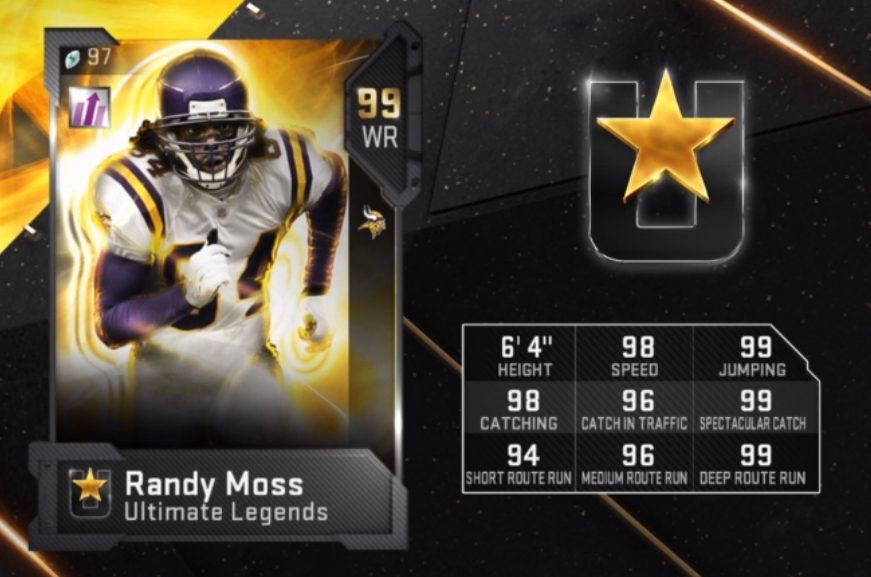 Moss doesn’t meet the Spin Move threshold, but that doesn’t make him a bad item.

Let’s start with the negatives first, because, well this is content about Madden Ultimate Team. Despite Moss’ incredible plethora of stats, 84 Spin Move could wind up sinking the item for a vast majority of people.

For many MUT users, it’s common knowledge 88 Spin Move is the threshold needed to receive the best spin animations which has created a domino effect as to how players then construct their respective defenses, forcing many to rely on players who can receive the red chem, Secure Tackler, which acts as a direct counter.

It’s a justifiable concern regarding Moss, but this might be one of the few situations where EA properly balanced the Vikings legend, considering an easier path to the aforementioned threshold would have essentially made Moss a necessity for any competitive lineup.

6-foot-4, stock 98 Speed and four separate 98+ receiving stats already make Moss a near must-have if you’re worried about being competitive in head-to-head matches, as the amount of chemistry/Power-Up tweaks needed to make the previous highest overall version (96 overall Ghosts of Christmas Past) hit these sort of stock numbers just isn’t worth it.

Yes, a vocal minority of previous Moss users have complained about the receivers inability to make catches that should be made considering his high overall stats, but there’s only four receivers currently released who are 6-foot-1 or taller, have 95 or higher speed and a spectacular catch stat higher than 95 – two of which are Moss.

Randy Moss was so unique as a player in the NFL that attempting to balance a receiver with that combination of size and speed in a video game is beyond tricky. Forcing MUT users to purposely build Moss into the proper spin threshold is about as close to a proper balance as you can get for a WR that was essentially a real-life cheat code for the majority of his career. 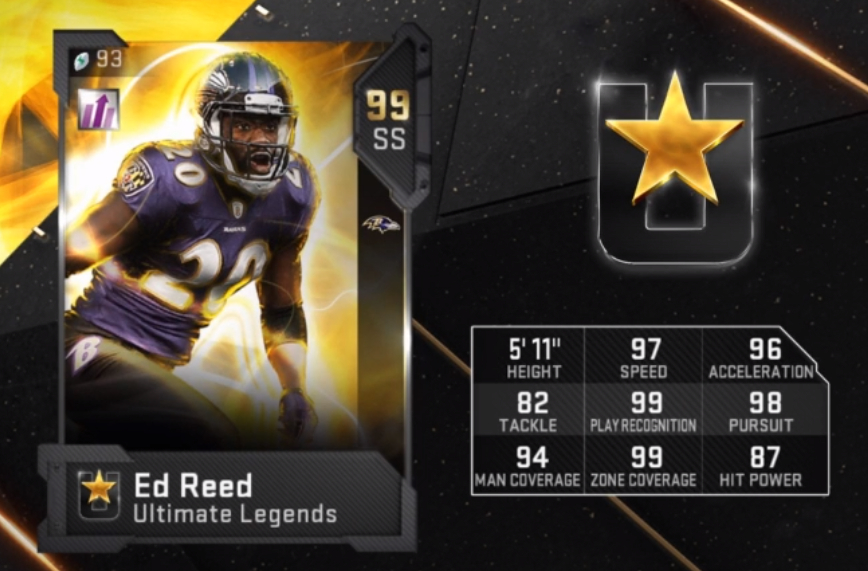 Reed figures to be a cross-manning menace, capable of sticking with even the fastest receivers currently available in MUT.

Reed never had those sorts of physical gifts, but the NFL’s all-time leader in interception-return yardage, and sixth all-time in interceptions, has found a place in the current MUT meta thanks to his ability to properly play zone coverage as well as man.

The lack of Hit Power (87) and height (5-foot-11) will have a certain subsection of players avoiding the Ravens legend, but it’s hard to argue against a player with 99 stock Zone Coverage, 97 Speed and 99 Play Recognition. Particularly in a meta which still prominently features crossing routes, having a safety capable of manning up the opposite side of the field is imperative – a skill Reed’s newest item directly caters to.

Both Reed and Moss can join multiple theme teams which is an added bonus given their respective items would be featured iterations regardless of the specific team focus. 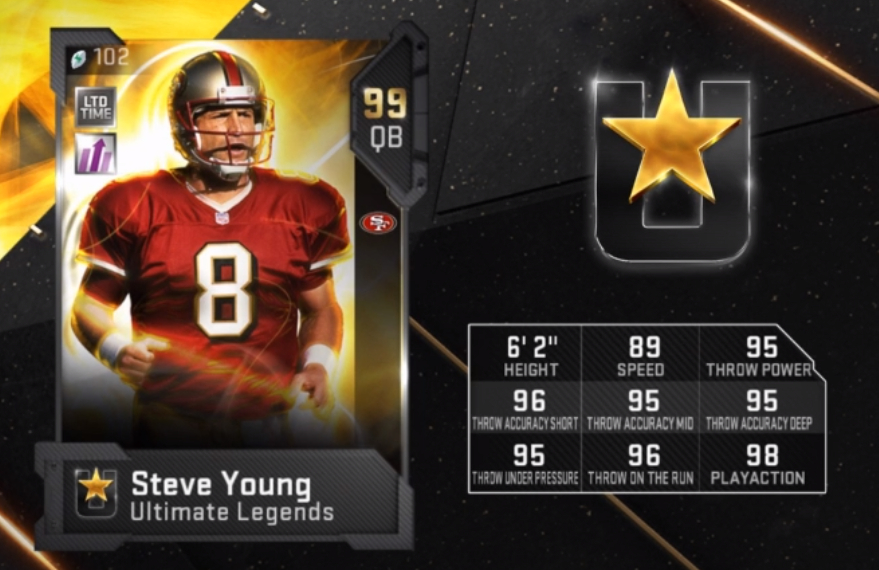 Young is an all-around quality quarterback for users interested in straying away from the popular options in the meta.

Young might be slower than someone of the main options in the current meta, but what he lacks in speed he makes up for in well-rounded throwing stats. 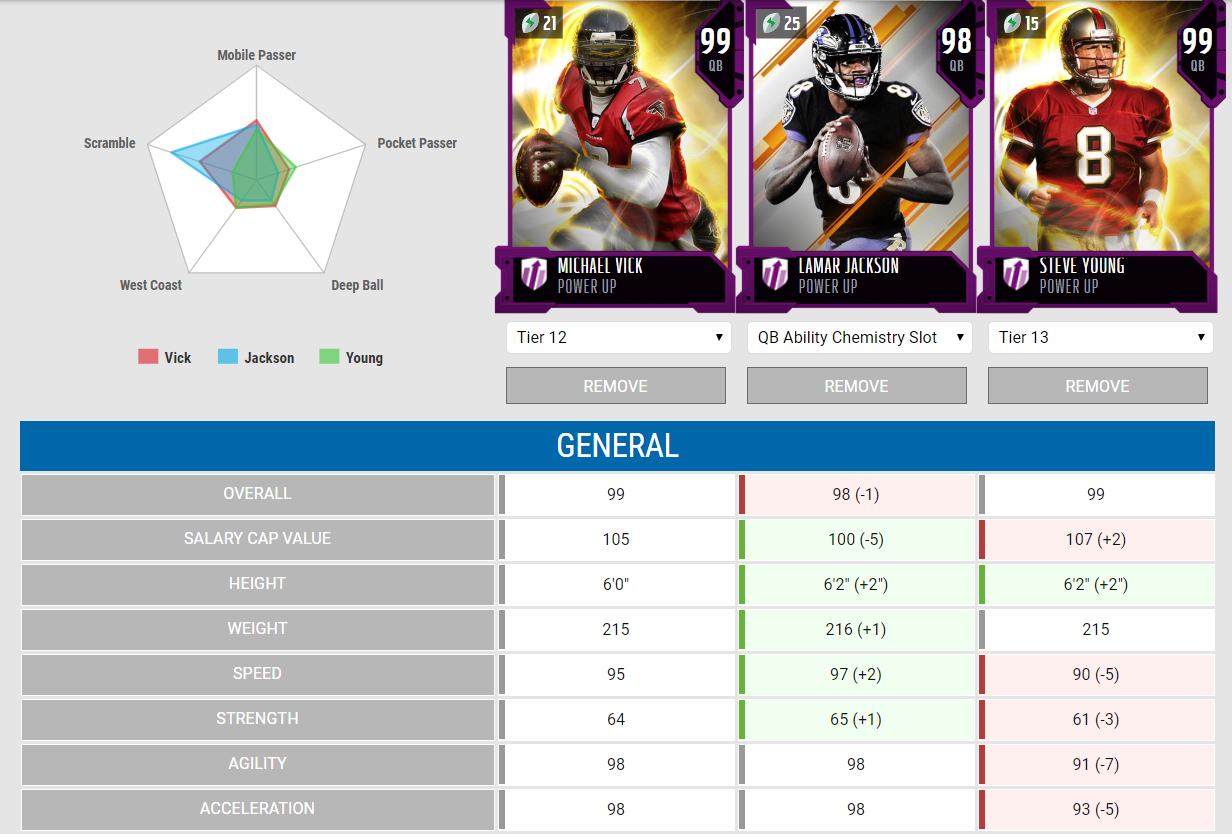 A side-by-side comparison of Vick, Jackson and Young when comparing their athletic attributes.

The image listed above does a good job illustrating that point. Young loses upperwards of five to seven speed when it comes to fully Powered-Up version of Michael Vick and Lamar Jackson along with -5 acceleration and -7 agility.

Those last two stats shouldn’t be glossed over, as a player’s ability to maneuver in and around the pocket depends largely on the latter as opposed to speed. Ultimately then, the decision about which quarterback to roster comes down to play style, as some might want a more mobile thrower who is less at risk to miss passes.

Listed from left to right – Vick, Jackson and Young when comparing the trio’s passing attributes.

Literally every important passing stat save for Throw Power Young sports a significant to moderate advantage over his fake colleagues, with a significant difference in Deep Throw Accuracy particularly crucial in the aforementioned cross-heavy meta.

Similar to the NFL Draft LTD Cam Newton, or even to a lesser extent, NFL Combine Josh Allen, Young has the speed to make a difference if needed, but his real value comes in the form of speed plus balanced throwing statistics. It might not get you to change your starting QB, but at the very least, Young’s newest item should make you reconsider what you want from the pivotal position.

A special edition of the Friday Night Football, airing at 8:00 PM ET, is expected to yield tidbits on the upcoming Power-Ups which will be released Sunday, along with a couple of potential new updates to the Color Smash promo which was revealed earlier in the week.

10 New Power-Up players were added to the game Sunday. The list is as follows: