The three Ghosts of Christmas Limited Times (LTD) won’t come with the same fanfare of similarly released items, particularly Saturday’s Legends, but that actually might be a good thing for their price.

While the Saturday Legends might have been a bit lackluster given the stature of their NFL counterparts, the Ghosts of Madden drops have a bit more to give.

Russell Wilson might be a bit disappointing, but Vita Vea and Ty Law seem to hold their own against the slate of previously released cards. 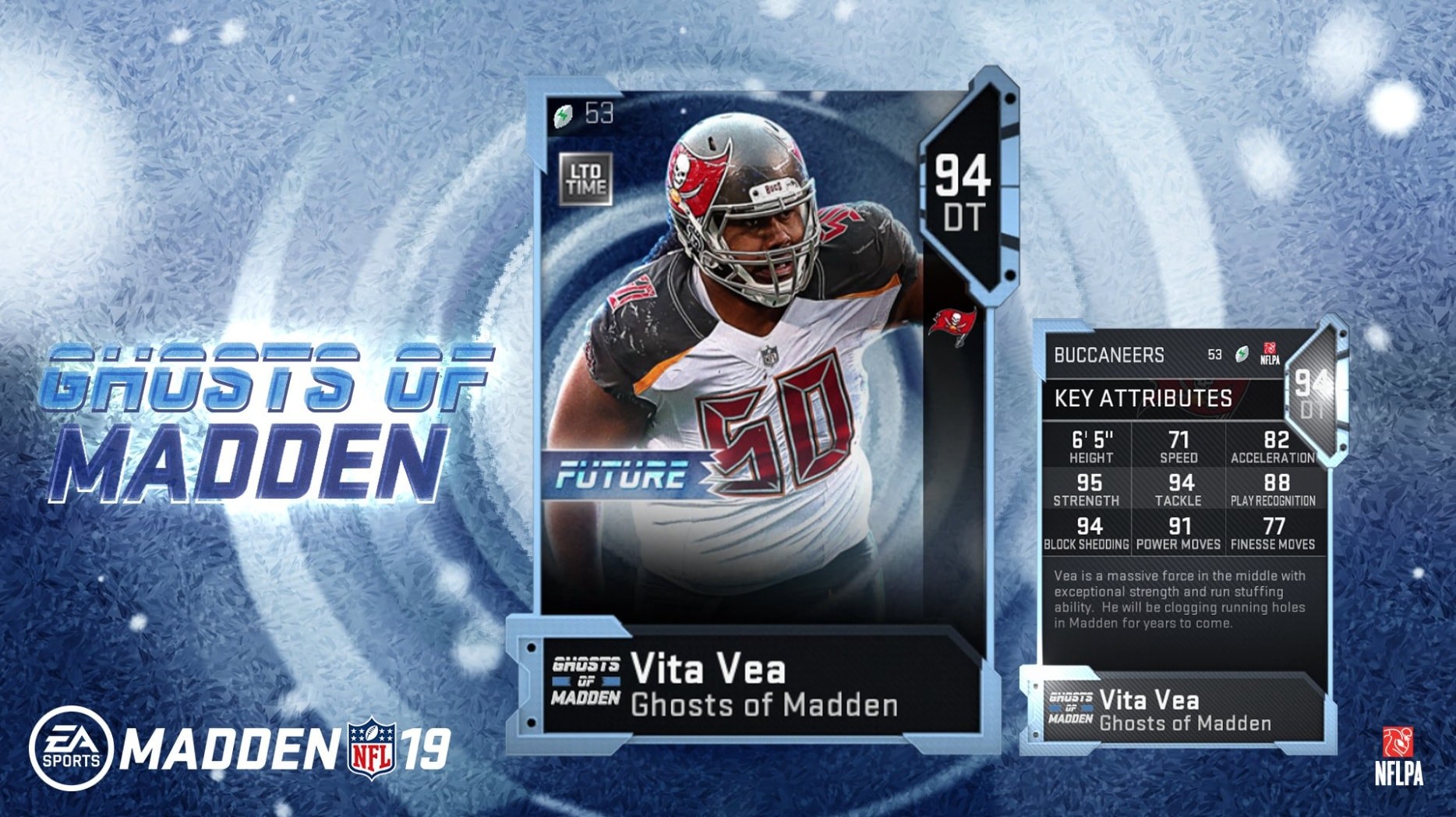 While Vita Vea’s rookie season with the Buccaneers hasn’t been as impactful as Tampa Bay fans might have hoped, his 87 overall Rookie Gauntlet card has been a darling in the Madden community thanks to his impressive strength and excellent weight for his defensive tackle position.

He’s perhaps a bit below other cards recently released at his position, 95 overall Ghosts of Christmas Present Ndamukong Suh and 95 overall Gauntlet John Randle most notably, but the common belief that some cards “just play better” than their stats might make Vea a target of interest for many squads. 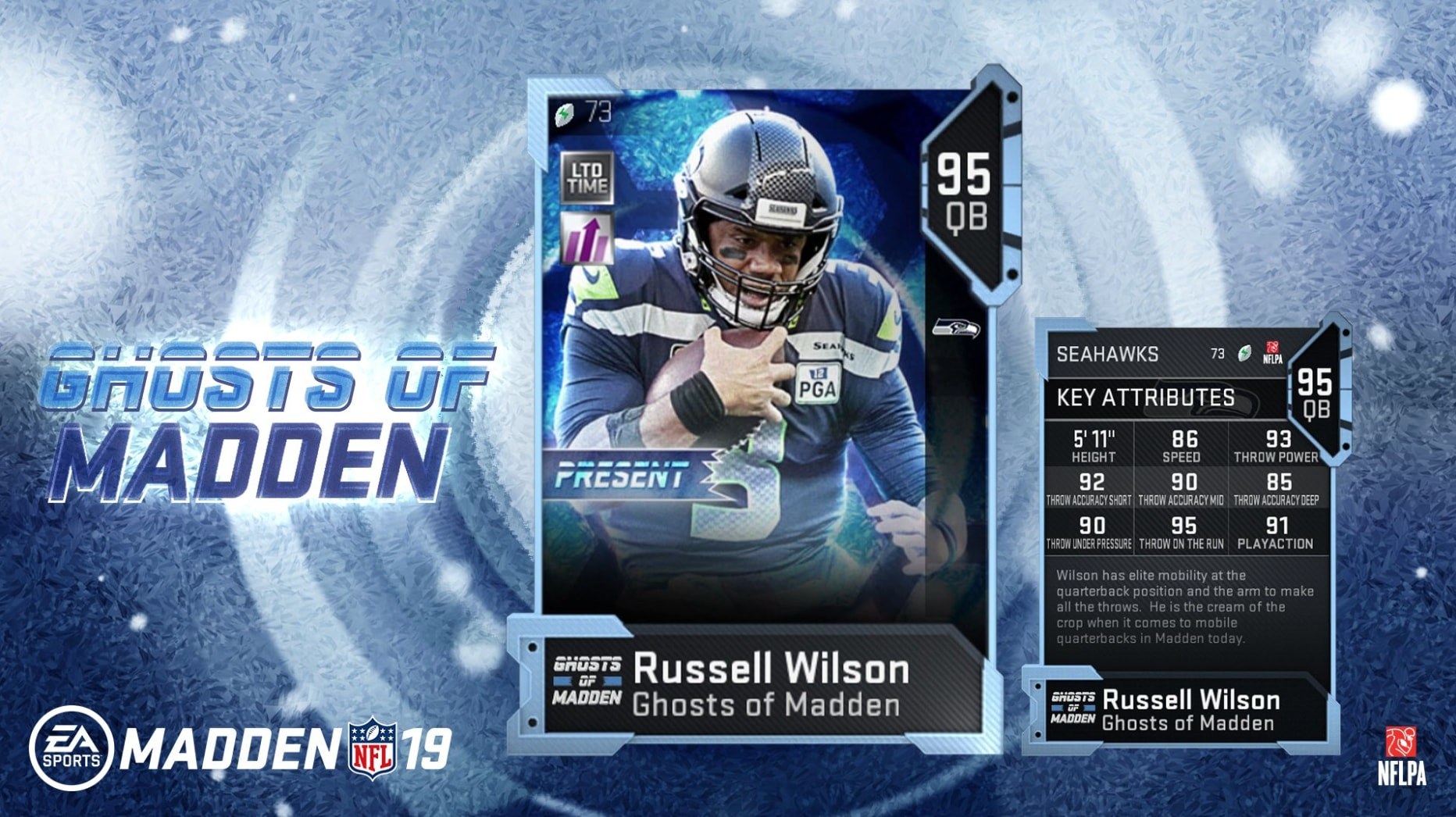 Russell Wilson’s LTD item is a bit disappointing, but that might wind up making the Seahawks quarterback relatively affordable despite the limited-time nature.

A lack of throw power has previously made the past two iterations of Wilson cards unreliable, but at least his 95 overall version boasts a respectable 93 in that category. However, 86 Speed coupled with a disrespectful 85 Deep Throw Accuracy still puts him firmly behind the likes of 95 overall Gauntlet Donovan McNabb or 96 overall Ghosts of Christmas Forever Michael Vick in terms of mobile QBs.

Seahawks’ theme teams will certainly enjoy the new Wilson, and there’s enough positive statistics to make Wilson a contrarian play if you’re looking for a different quarterback, but it’s tough to rationalize spending north of 500,000 coins just to be “different” at such a critical position.

The Ghosts of Christmas Past LTD card doesn’t present any such issues, however, as 96 overall Ty Law measures up to a variety of different cornerbacks released in recent weeks.

At 93 Speed and 96 Zone Coverage, Law shouldn’t be burned often on any sort of deep passes, and he has enough man coverage and pressing abilities to act as a solid slot cornerback if need be.

With the likes of Jaguars’ Jalen Ramsey, Marshon Lattimore, and Ronde Barber overdue for updates soon which will likely outclass Law, it might behoove players interested in improving their cornerback depth to wait until the official release of the Playoffs promo, which is expected to be announced next week, but it’s hard to argue Law’s lack of merits with anyone looking to make an immediate upgrade. 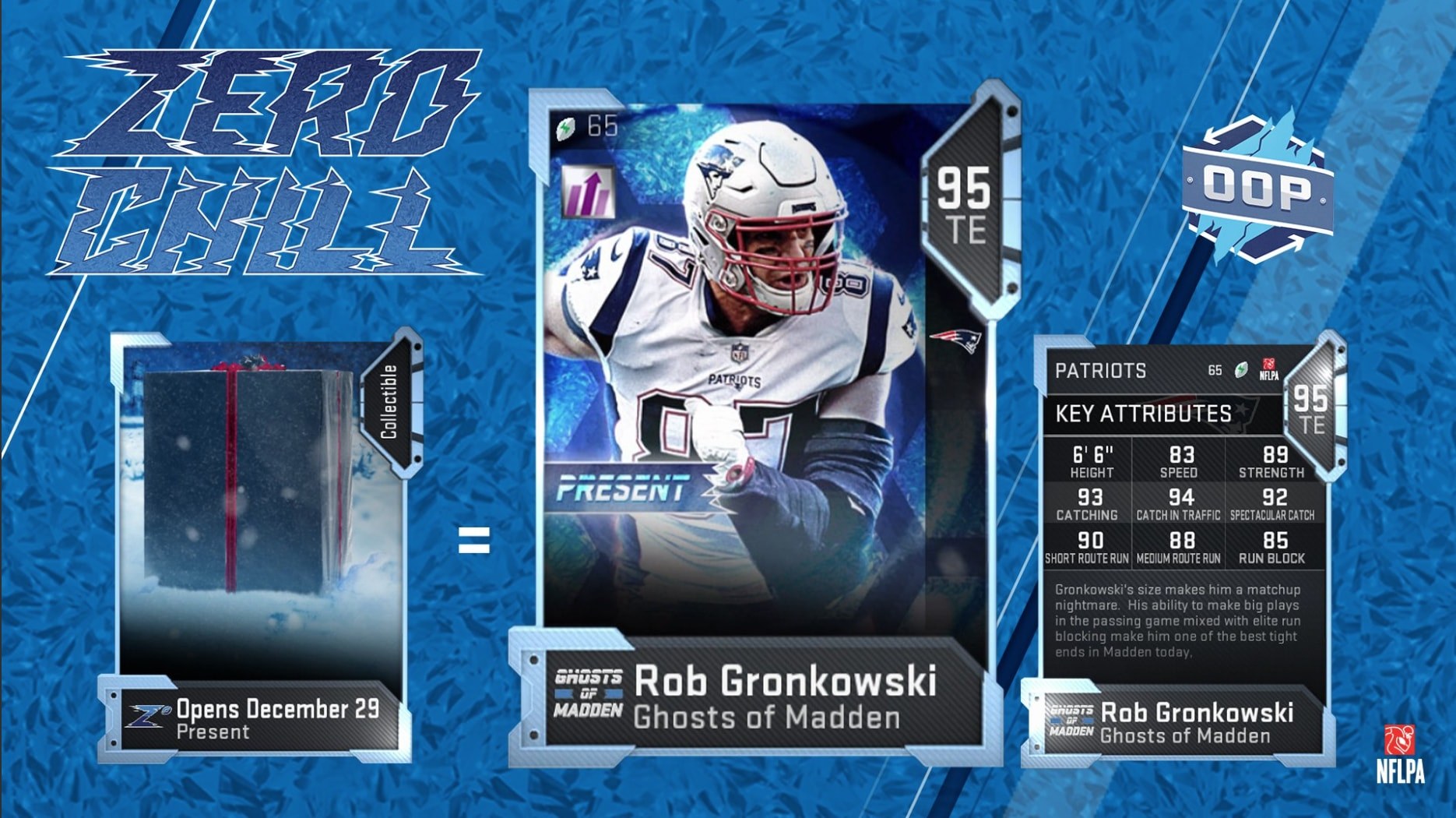 Three different presents revealed on top of the Legends and LTD Ghosts. While the two smaller ones yielded an Out of Position Gold+ Player pack and Zero Chill Low Elite pack, respectively, Saturday’s extra large gift yielded another update to an Ultimate Kickoff player, following the likes of Antonio Brown and Luke Kuechly, who have both gotten upgrades in the past two weeks.

Rob Gronkowski joins a suddenly loaded list of available tight ends, a position which has seen three 95 or higher overall options released in the last 24 hours. Gronk isn’t the fastest, but he’s easily the best run blocker of the three, and through the use of Power-Up can reach a serviceable 85 Speed.

Perhaps more importantly, he’s a fairly affordable elite option, as the lack of need for “snow”, Gronk’s current quicksell currency, has kept him and the likes of other underwhelming Ghosts at a reasonable enough price, even if a player merely wanted to try out the item.