As we near the end of 2018, the Ghosts of Madden program is still in full force with a host of new options available for Friday’s drop.

While the Zero Chill promotions have been a bit hit or miss over the last week or so, December 28’s release has a bit of something for just about everyone.

Containing updates to Rookie Premieres and a few heavy-hitting NFL stars, this is one of the biggest drops in a few days. 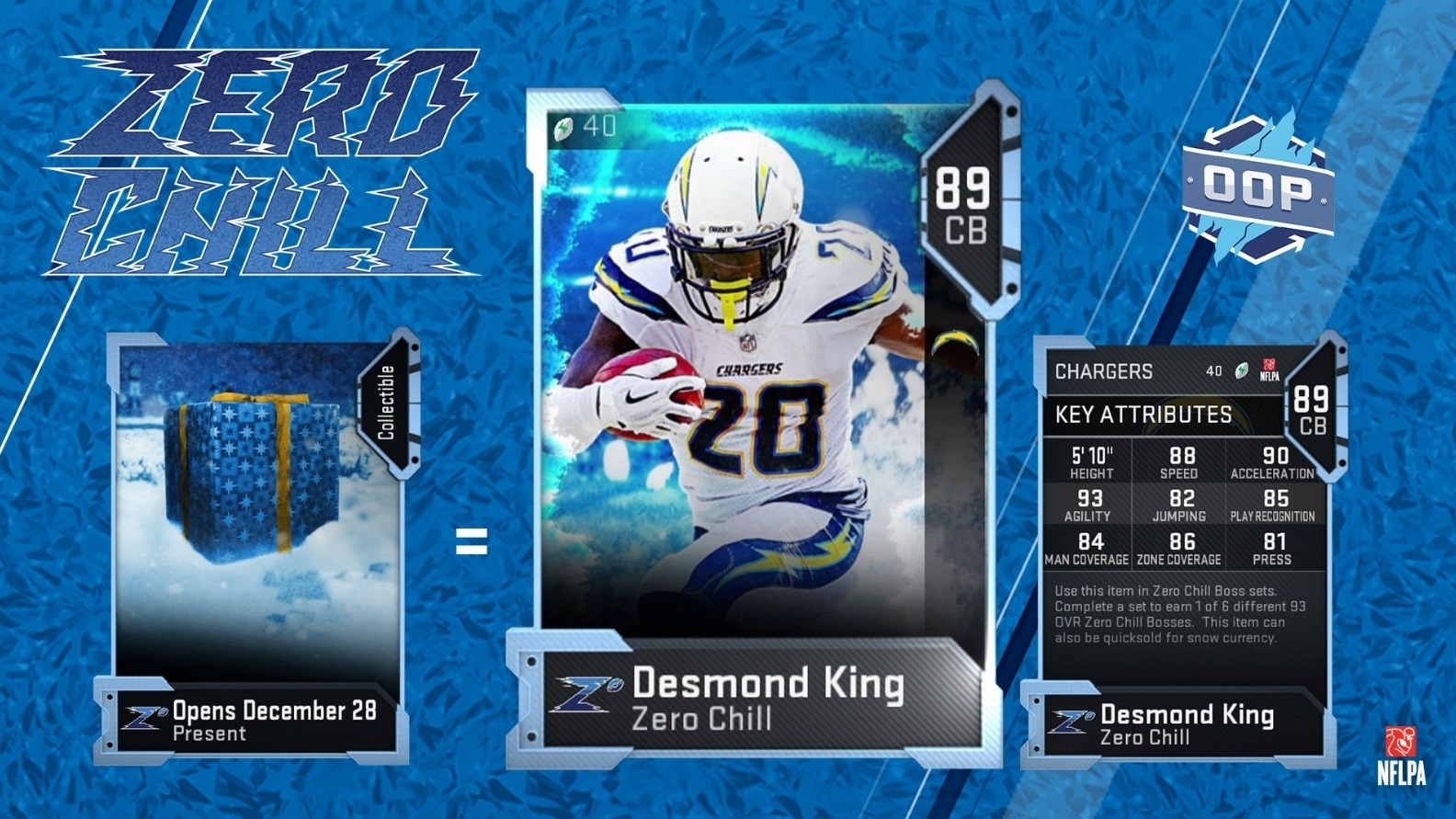 Starting first with Friday’s set of gifts, cornerback Desmond King finally got a much-needed upgrade, marking his first since an 82 overall Week 6 Team of the Week card.

Given the Chargers are poised to be a part of the presumed upcoming Playoffs Promo, Pro Football Focus’ No. 2 overall cornerback could very well receive another update in the near future, putting him in position for a Power-Up card.

For now, though, King’s 89 overall card simply winds up being a fun option at cornerback for Chargers theme teams, as his speed and ensuing coverage stats aren’t enough to make much of a difference for most MUT teams who have played for the majority of the year. 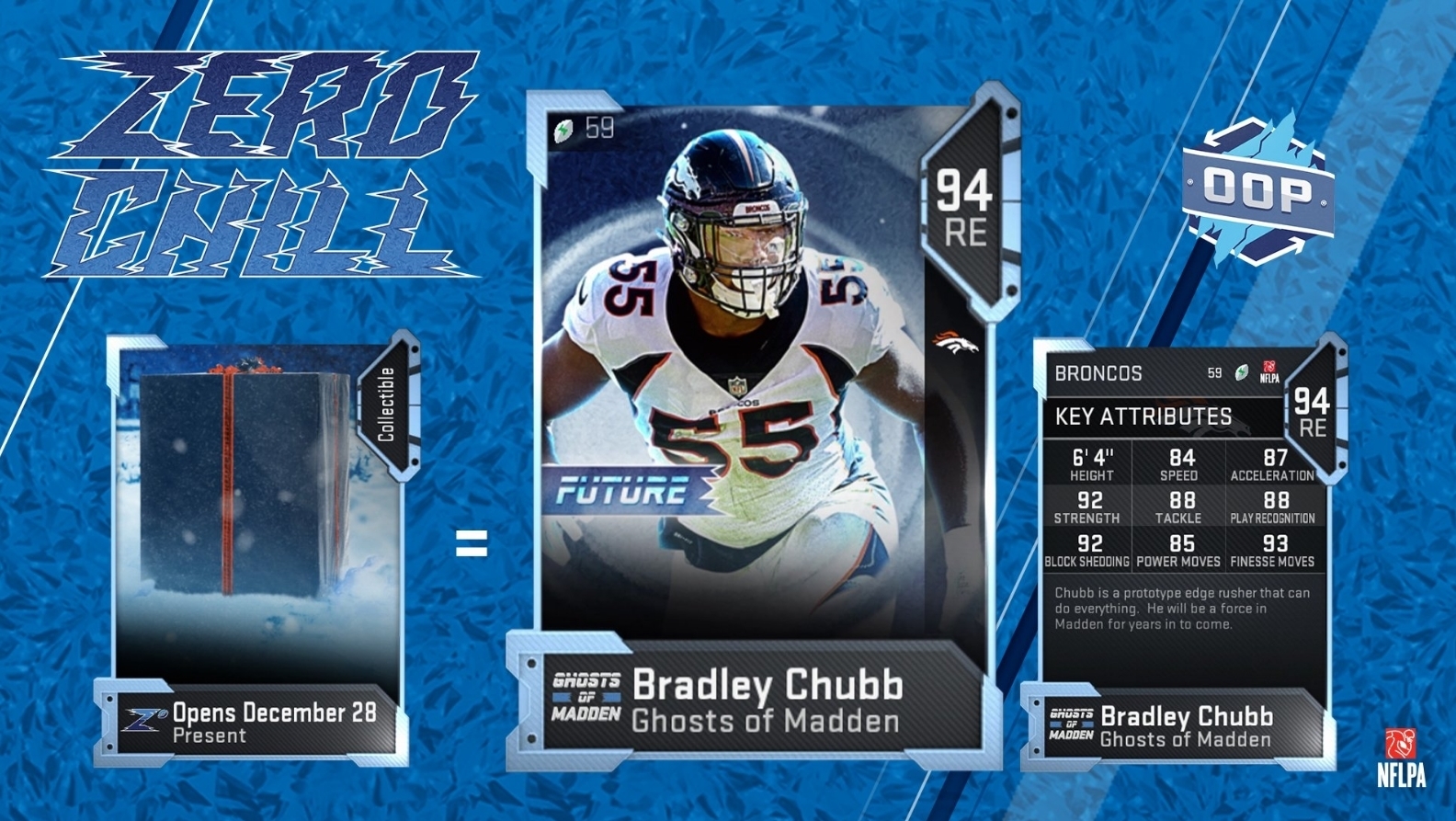 Friday’s slate of gifts also introduced another much-needed upgrade for right end Bradley Chubb who was sitting on an 84 overall MUT Heroes card since early October despite currently tied for fifth in the NFL in sacks with 12.

The Rookie Premiere (RP) program – a long-running tradition in the Madden franchise which continued in Madden 18 – allowed for a number of popular rookies to receive cards which would carry over into 19, all with the promise of future upgrades in line with the upgrades received naturally throughout the year.

Chubb, along with the likes of soon-to-be mentioned safety Derwin James and running back Saquon Barkley, will automatically be updated to their 94 overall editions if you own their Rookie Premiere item, however, those who did not invest in the potential carryovers will still have the chance to get them through the Ghosts of Christmas Future gift set in the store. 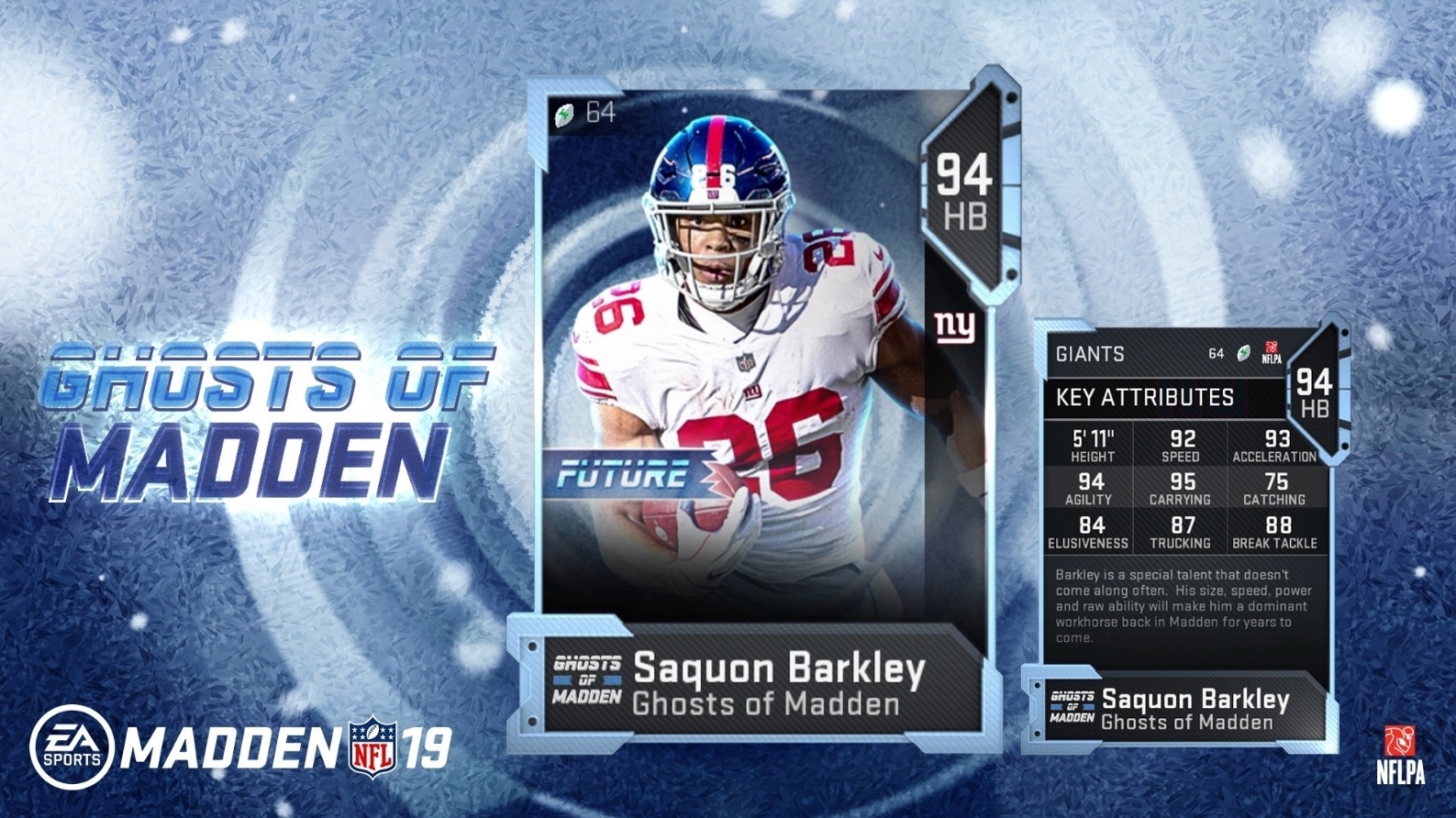 Rookie of the Year candidate Barkley was given a 91 overall card upon launch which has hindered any potential upgrades throughout the year, but the Giants’ star running back was likely overdue for a boost as well.

While Friday’s edition doesn’t quite do him justice in terms of speed, for most people he’s simply a free upgrade upon the aforementioned Rookie Premiere item and thus is nothing to complain about.

Without a Power-Up option at this time, people without the RP item likely won’t be too interested in acquiring Barkley, but he’d make for an interesting investment option given his popularity and location in a large market. 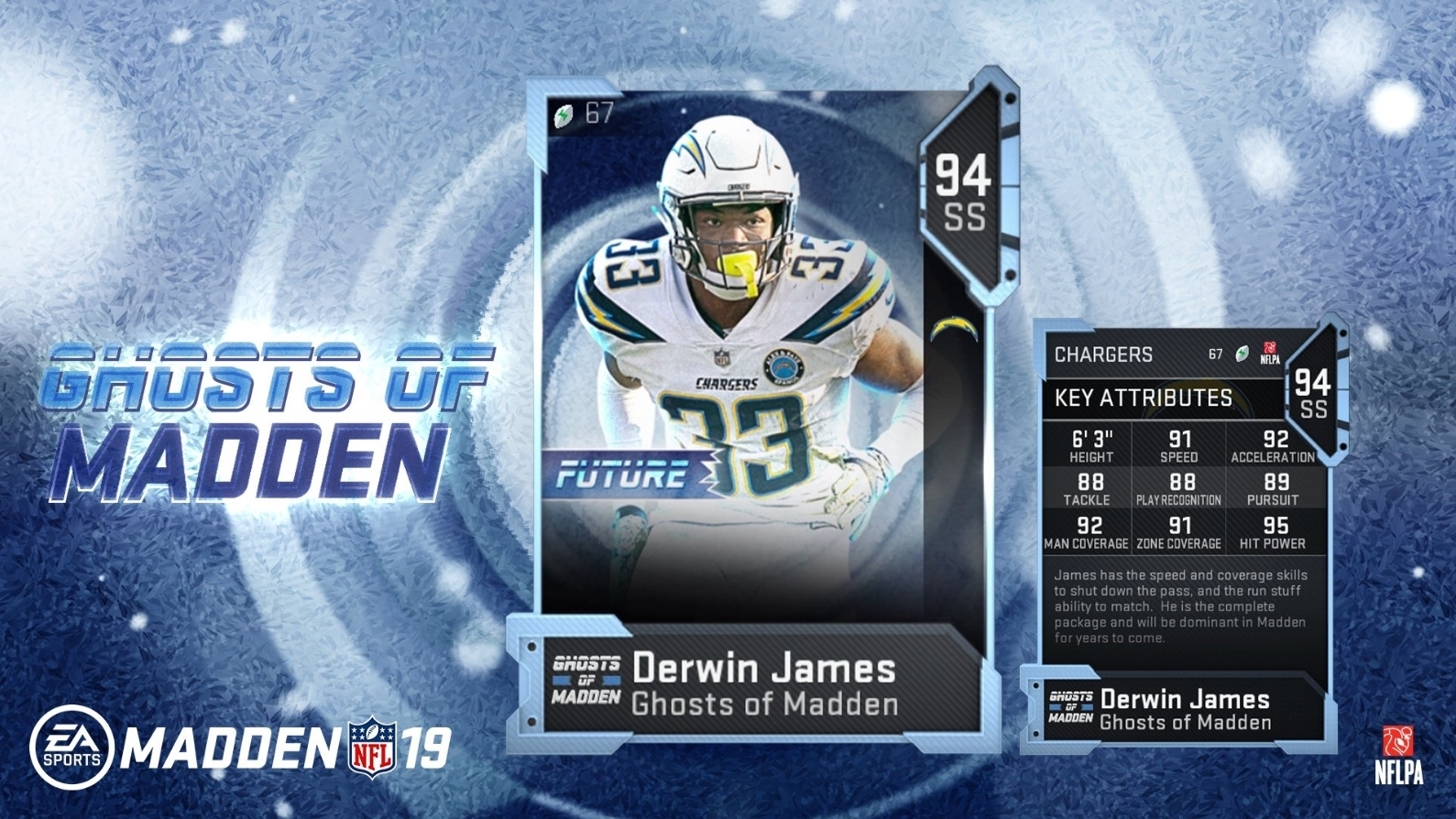 James is actually the most enticing of the Rookie Premiere options for those without the item, given his size, speed and hit power.

While he doesn’t stack up to yesterday’s Ghost of Christmas Past strong safety Ed Reed in terms of coverage and speed, he’s significantly taller (6-foot-3 compared to Reed’s 5-foot-11) and can lower the boom (95 hit power) better than most current options.

Other than 93 overall Team of the Week Boss Adrian Amos, who is likely primed for an upgrade as well, James is easily the most well-rounded option available and should be in line for a Power-Up option in the near future thanks to his 90 overall MUT Monster card which came towards the end of October. 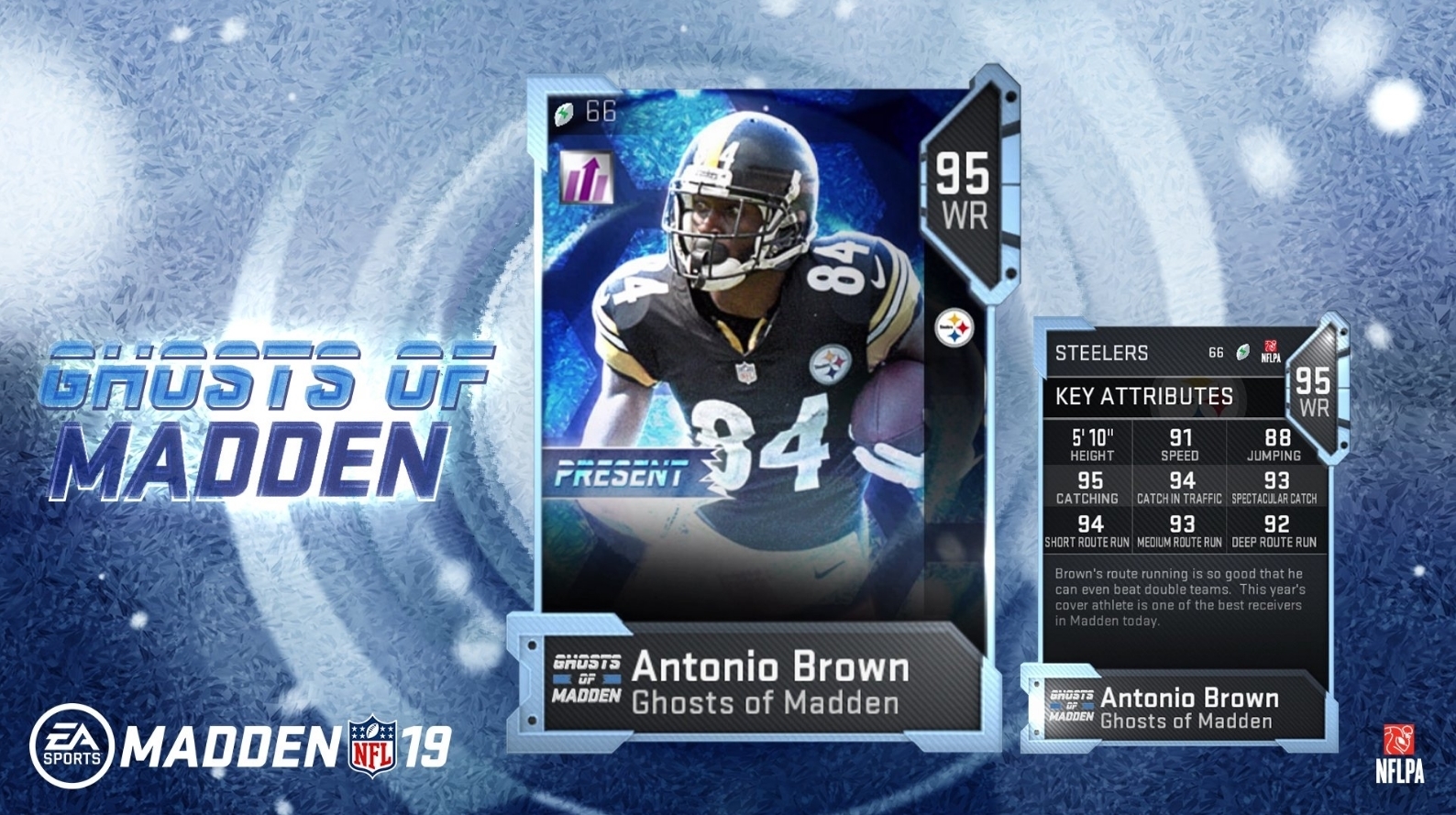 It’s a little stunning that the Madden 19 coverboy hasn’t gotten an upgrade to his 92 overall Ultimate Kickoff card since early September, but at least EA rectified it somewhat with his Ghosts of Christmas Present card.

91 speed at this point in the year, with the likes of 95 overall Ghosts of Christmas Present Julio Jones, Legends Jerry Rice or even Zero Chill Chad Johnson, is downright disrespectful and essentially makes Brown merely a theme team option; nothing compared to the real-life player that has dominated the NFL for years. 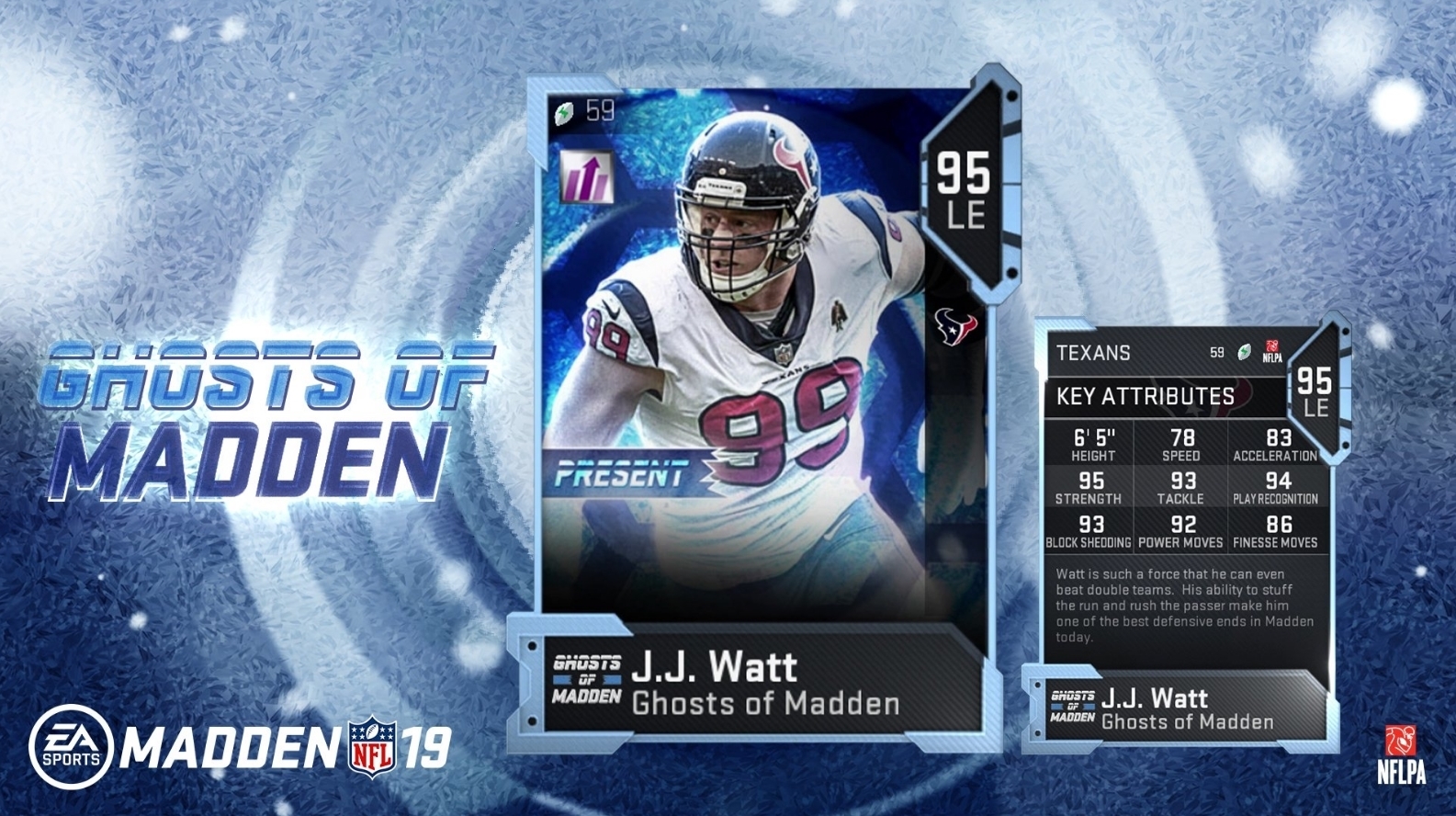 The lack of top-tier pass rushing options this year has made Watt’s 92 overall Gatorade Card which launched towards the end of August still fairly viable, but it’s tough to get overly excited for his 95 Ghosts of Christmas card edition, mainly because it doesn’t stand out against the likes of 95 overall Legends Deacon Jones or 95 overall Legends Michael Strahan.

One of the best pass rushers of his generation, Watt’s 78 speed makes him unreliable against the speedy quarterbacks dominating the meta, and the lack of discernible “star” pass rushing stats makes him a ho-hum high overall option at left end. 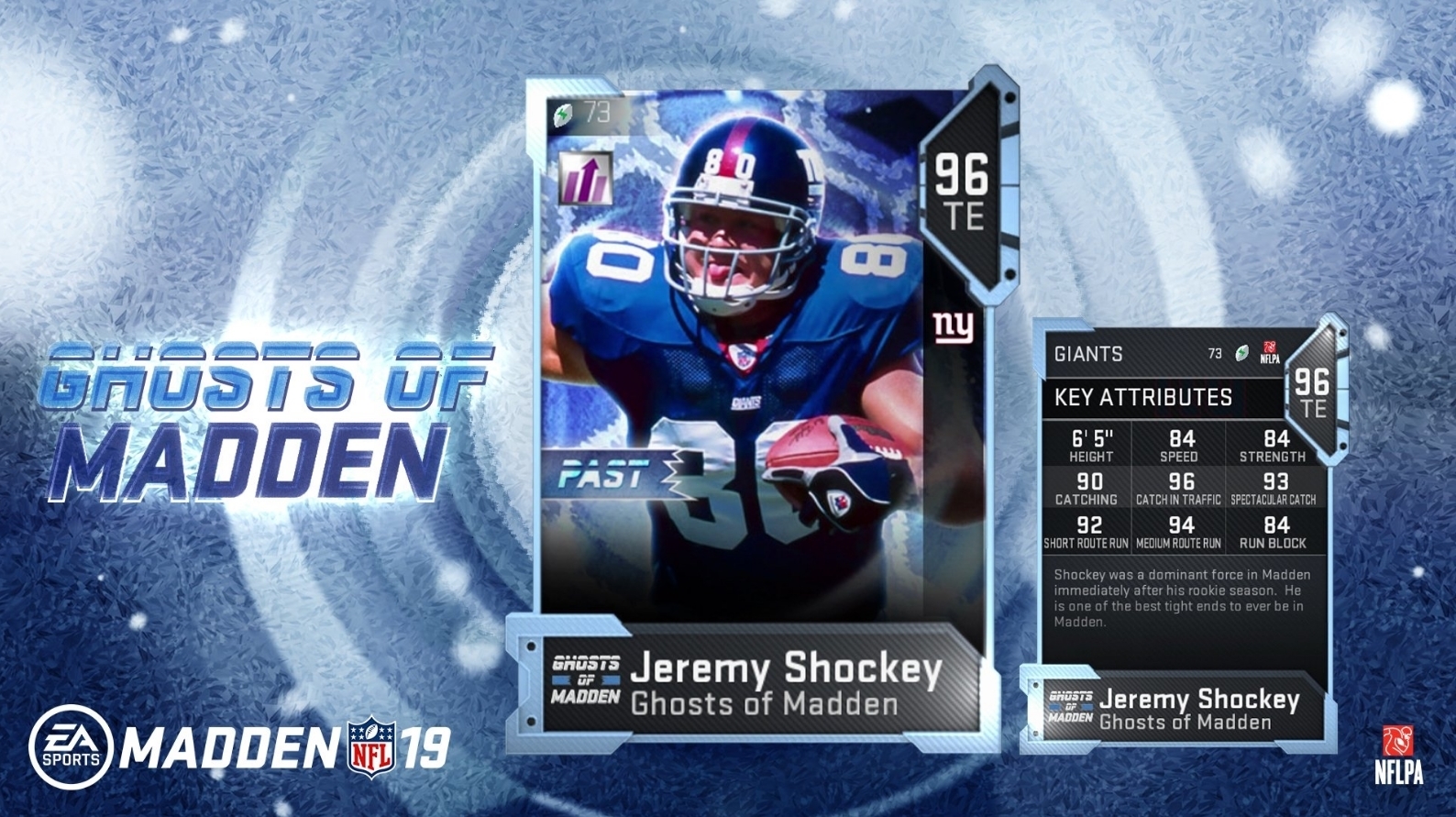 84 speed won’t be enough to entice people away from their Team Captain Shannon Sharpe, and with the expected release of Legends 95 overall Sharpe on Saturday, it puts the Giants Legend further behind the eight-ball at the tight end position. 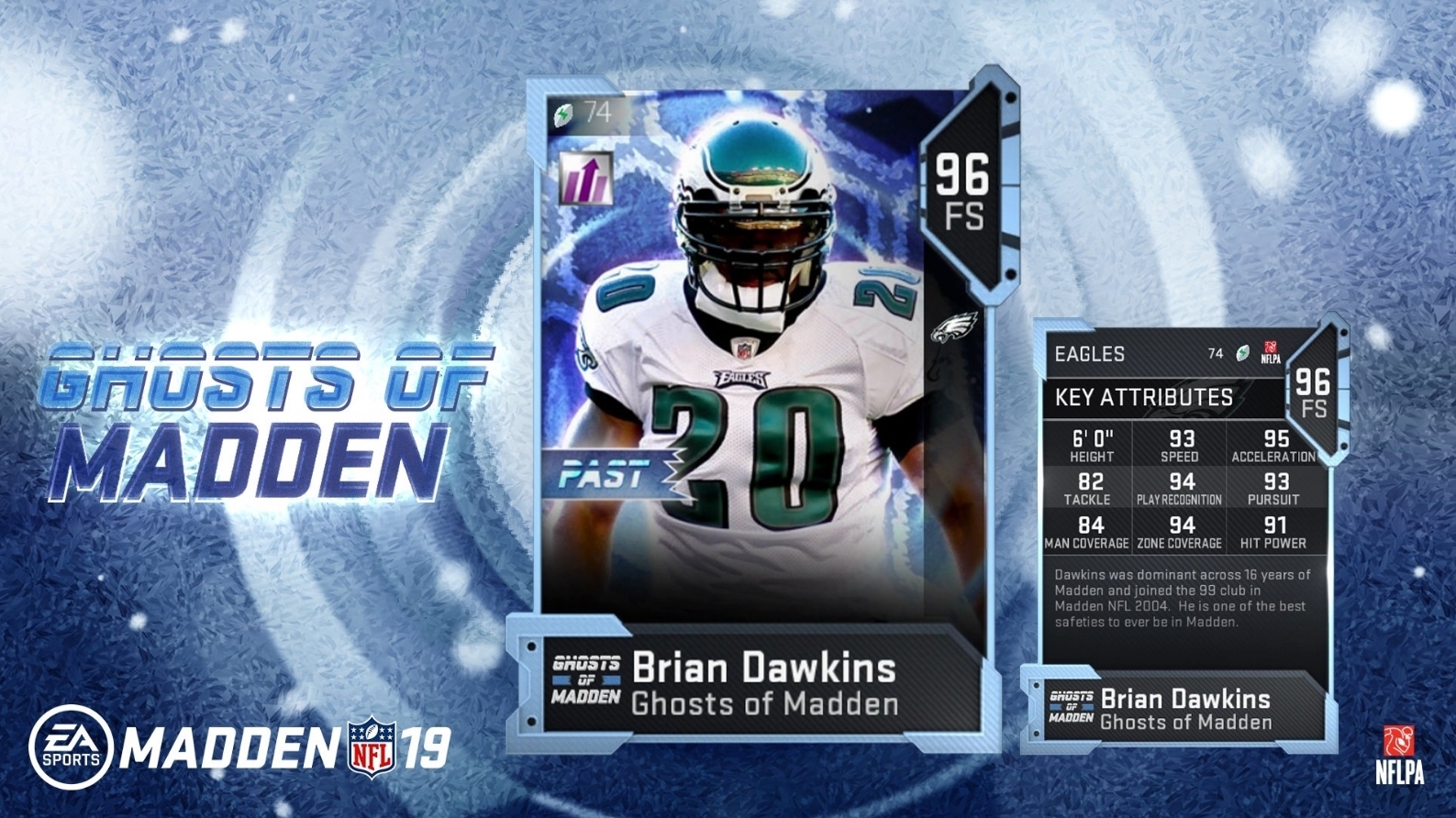 A little undersized at 6-foot-0, Dawkins has enough speed to cross man if needed, and a mix of hit power and zone coverage to patrol the middle of the field without any consequences.

With the newest update to Dawkins, only two base Legends 91 overall and under have yet to receive some sort of upgrade, as right guard 91 overall Larry Allen and left end 91 overall Reggie White will likely be next to see boosts in the near future.