With the NFL Playoffs right around the corner, Madden has released a slew of new MUT cards for players to dig into ahead of the big weekend.

While each team has a slew of cards available, there are six ‘bosses’ that make up each conference that will give players the most value of all.

There was also two exclusive NFL Playoff Masters that were released along with the NFC cards, but it’s now time to dive into the options available from the AFC Playoff teams. 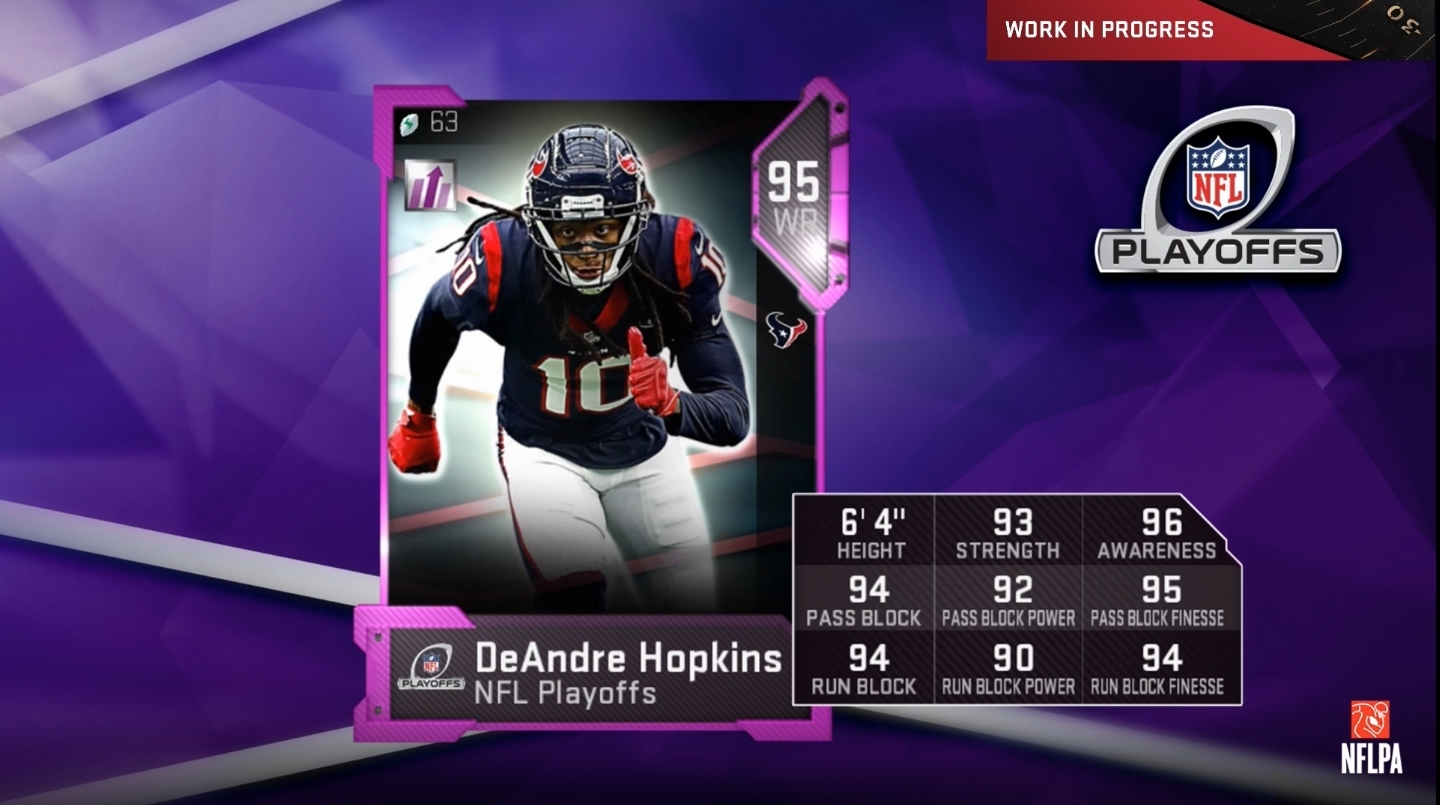 Note: The stats on this image are not reflective of his actual stats!

While EA did not have the correct stats for his image on stream, he’s expected to be one of the best deep ball threats for his height and should be an immediate upgrade to any squad. 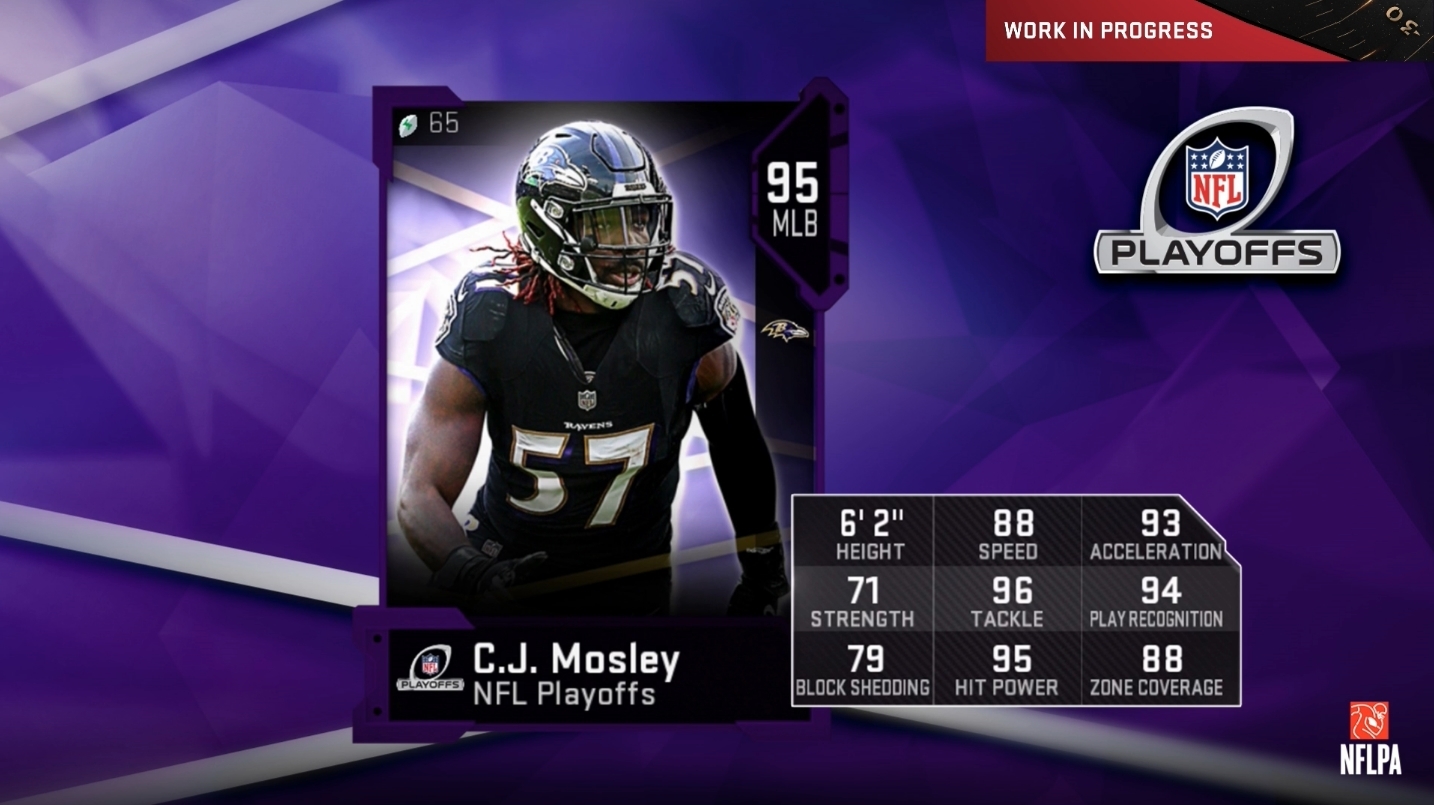 C.J. Mosley leads the charge for the Ravens, becoming the second Ravens middle linebacker in the last two weeks to register at 95 overall (along with Legends Ray Lewis).

With a plus four Speed boost from his 89 overall Harvest card, this former Alabama linebacker is a stud prospect all around and should fit in nicely as either a user or AI-drive option. 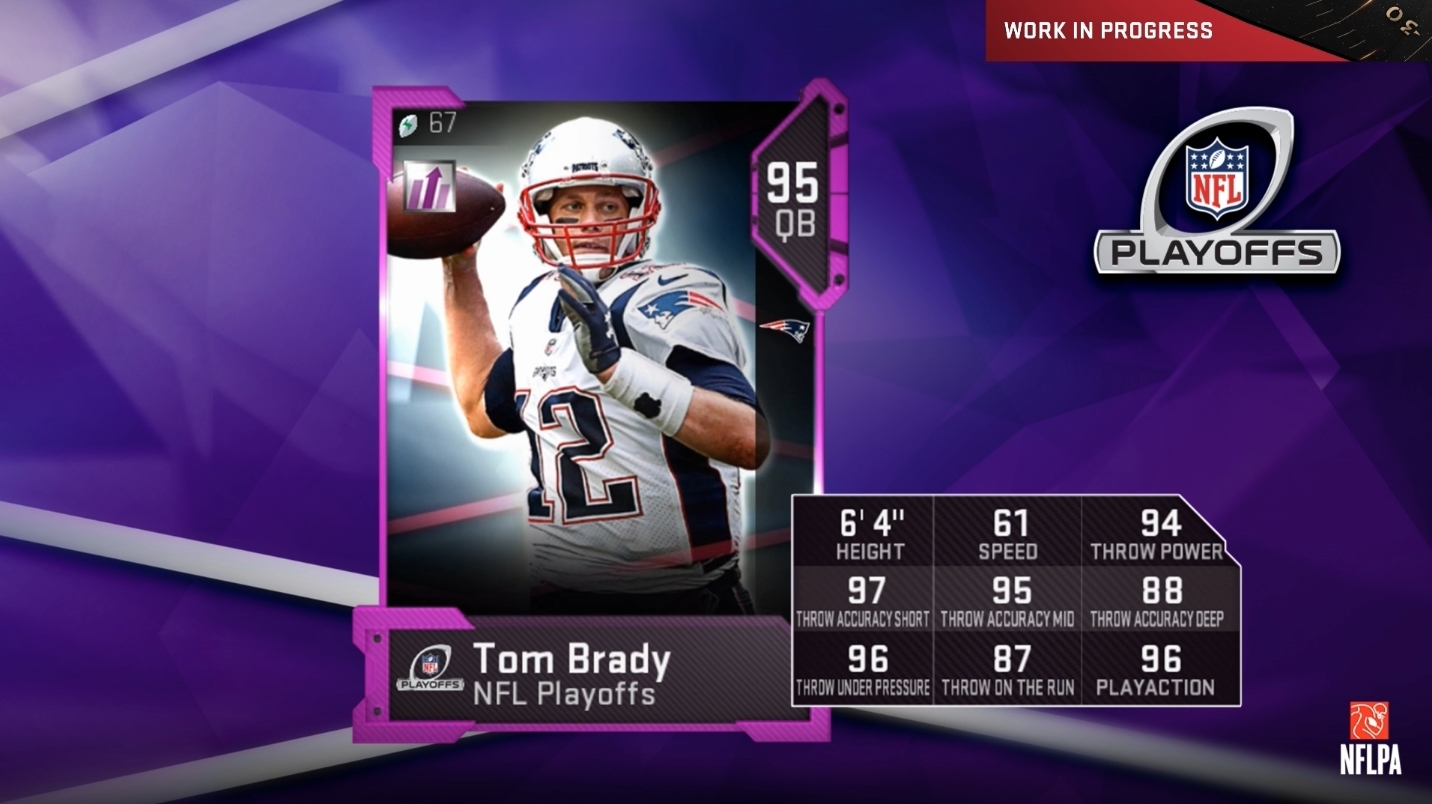 It seems crazy to think about given the Patriots success in 2018, but Tom Brady has yet to see an upgrade to his 92 overall Team Diamonds card which was available at launch, until today.

A pure pocket passer, the Patriots veteran quarterback should be able to make every throw needed in the pocket, but don’t expect him to do much more than that. 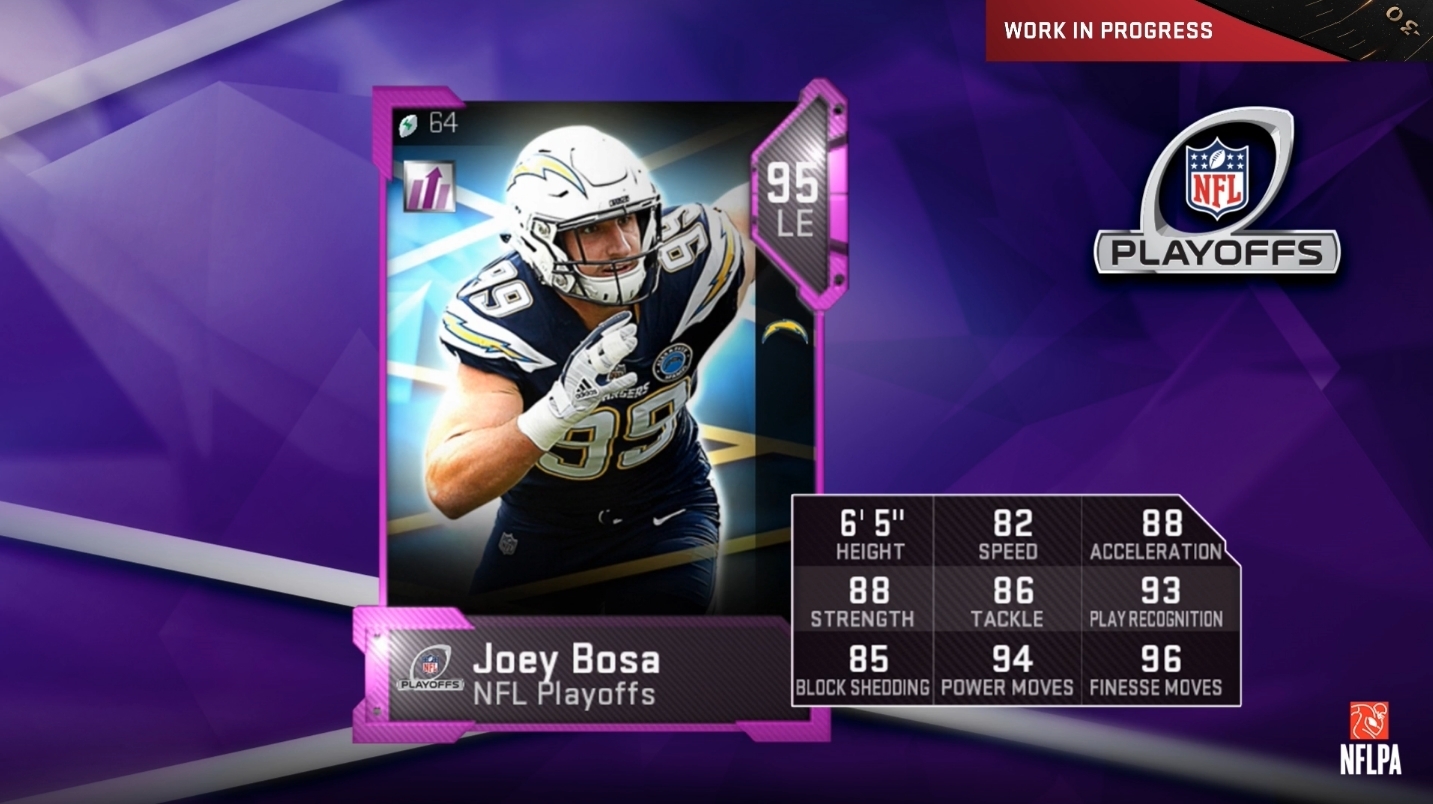 Despite only playing half a season, Joey Bosa received his fourth upgrade to his base 85 elite card with the 95 overall edition.

85 Block Shed will immediately have people dismiss the card, but a dual combination of 94 Power Moves and 96 Finesse Moves makes him a capable pass rusher regardless. 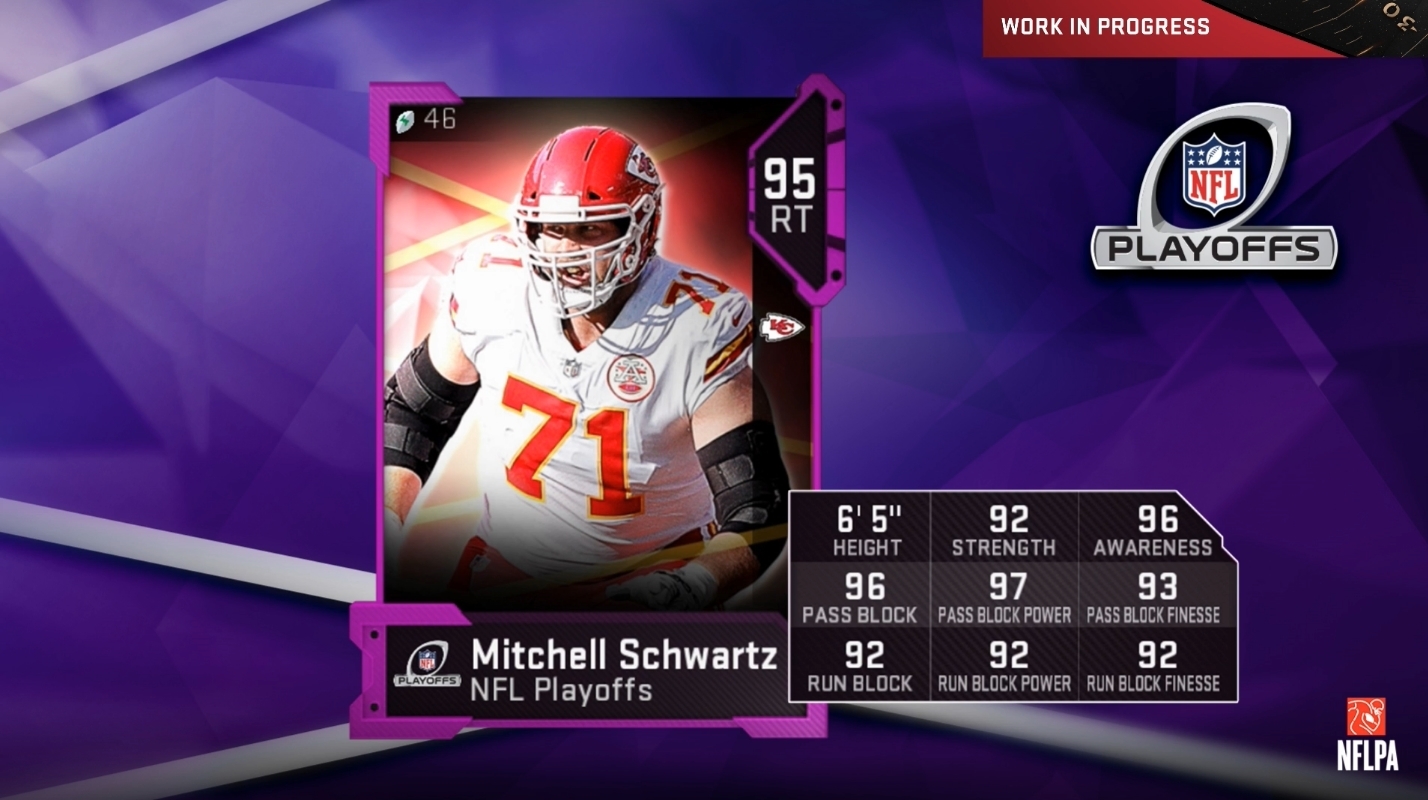 It’s not a flashy position by any means, but Mitchell Schwartz might actually be the best card to be added during the NFL Playoffs promo, as the right tackle position was sorely lacking elite options, to the point where Lane Johnson’s 95 Christmas Present and 92 overall Team Diamond cards where the best and third best options, respectively.

Without a single attribute that looks like an eyesore, Schwartz is an excellent all-around option for a player that badly needed an improvement on his 81 overall base elite. 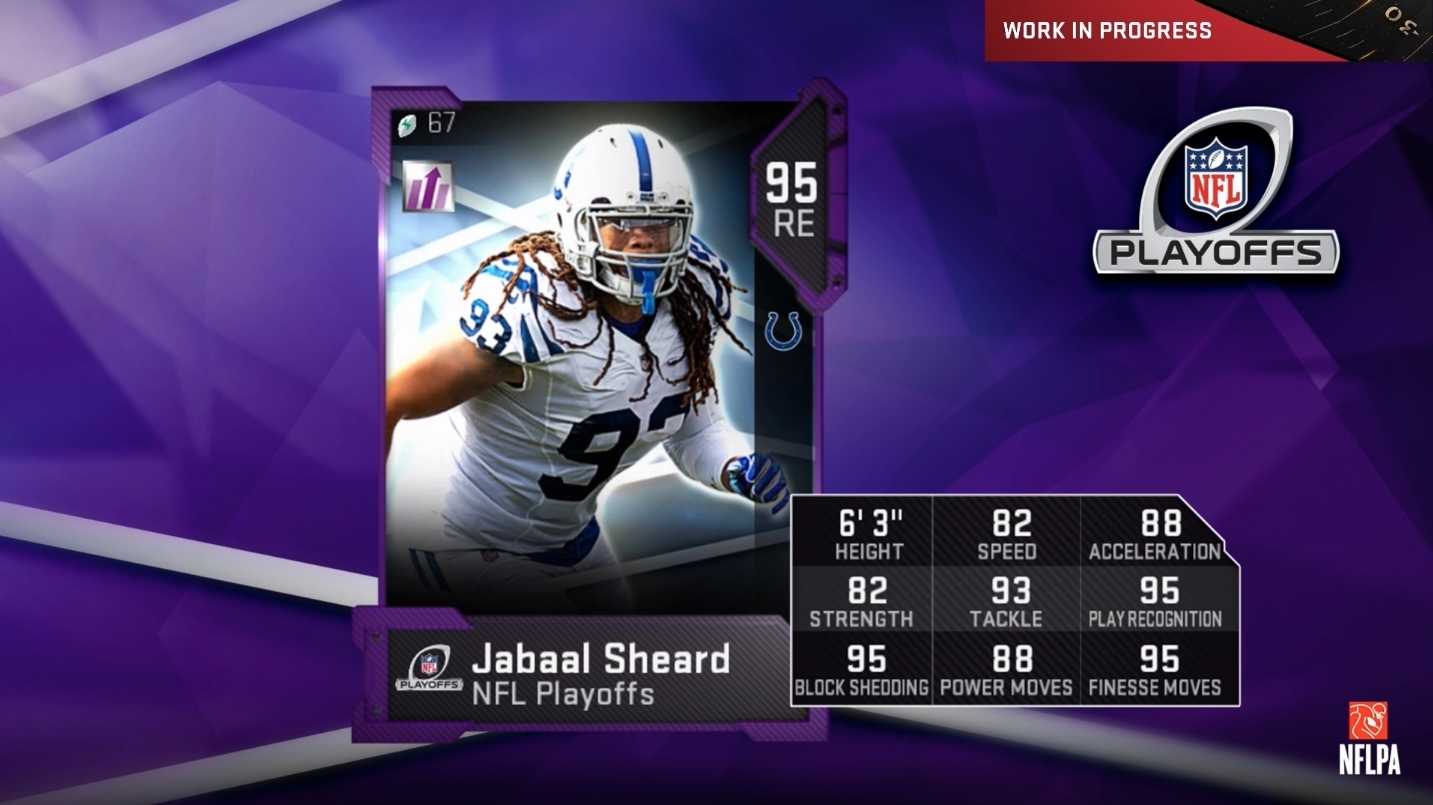 Jabaal Sheard has developed into a bit of a Madden favorite, as the right end only recorded 50 tackles and 5.5 sacks in 2018, but immediately becomes of the best 4-3 ends in Madden Ultimate Team thanks to his serviceable speed and 95 Block Shed.

He’s also a major boost to theme teams, as both the Browns and Patriots will have multiple 95 overall Playoffs Heroes available as a result of Sheard’s newest card.