Riot Games launched League of Legends K/DA skin line at the tail end of 2018, which gave the cosplay community a whole branch of inspiration to work around but it feels like we hit the pinnacle with this Evelynn design.

The League of Legends team released the wildly popular K/DA line in celebration of the host country for the 2018 Worlds Championship, South Korea, leading to a series of incredible cosplays mirroring the fictional K-Pop group.

While the skin line only produced a handful of skins for Akali, Evelynn, Ahri and Kai’Sa, it hasn’t stopped fans from giving their own unique twists for the pop sensations.

(Timestamp at 3:02 for mobile viewers)

In a Twitter post, cosplayer ‘ThelemaTherion’ posted an updated photoshoot for her K/DA Evelynn design showing one of the most dazzling takes for Agony’s Embrace to ever come out.

ThelemaTherion’s cosplay perfectly captures the numerous elements thrown into the mix which make Evelynn’s design a standout among her K/DA peers, such as the elongated claws, the fur-lined gloves with matching leather outfit, and even the iconic shades that the champion wears in the music video.

Even more stunning are the details that are included in the cosplay’s photoshoot which showcase one of the more eye-catching effects from the music video that has a towering Evelynn in numerous shots. 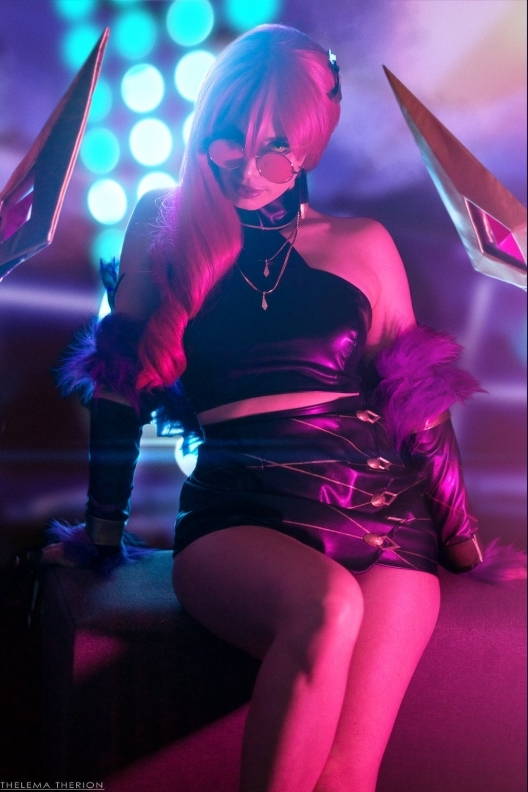 The cosplayer has everything going for her from the incredible K/DA Evelynn design, to the lights, and the pose.

Crafty cosplay goes beyond the outfit

While it would take a lot of ingenuity or extensive CGI work to make up some of the other dazzling shots, ThelemaTherion and her team were able to get one sweet shot using a toy prop.

“Skirt brooches were modelled and 3D printed by MrGellido,” ThelemaTherion said. “As well as some of the tails decoration and the shoe embellishments (not pictured). And yeah, the car in the first image is the little toy lamborghini I got for the mv XD” 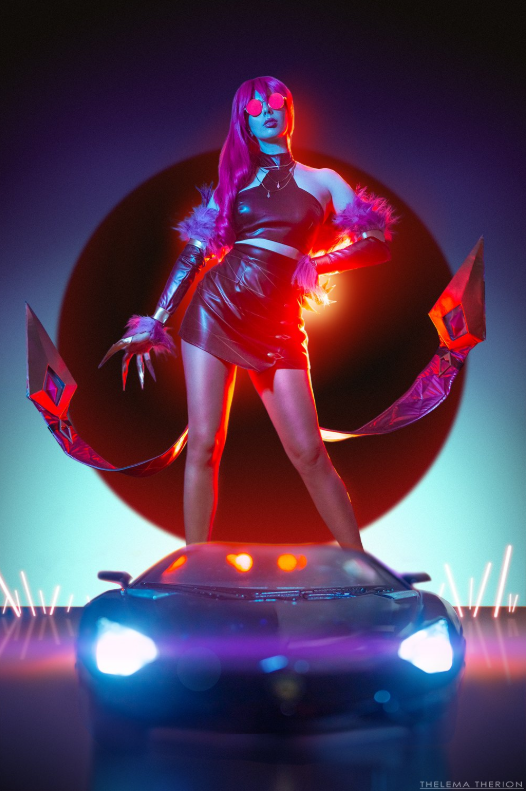 Cosplayers are no strangers in using random props or materials to complete the perfect look, and that creativity is in full display as ThelemaTherion brings one of Evelynn’s iconic shots from the video to life.

This has to be one of the most impressive designs to come out of the League of Legends community, and ThelemaTherion’s Evelynn cosplay is flawless in its approach.