A new show will be releasing soon on Netflix that will feature 100 Thieves’ League of Legends team from the 2018 NA LCS Spring Split.

Called 7 Days Out, Sony Pictures TV’s newest production documents the excitement and drama behind the scenes in the seven days leading up to major live events in the world of sports, fashion, space, and food.

The first season, which will be available for streaming on Netflix starting December 21, includes an episode on the story of the days leading up to the finals of the Spring Split between 100 Thieves and Team Liquid, which took place on April 8 in Miami Beach, Florida.

“The story of this year’s League of Legends Spring Split was a high point for us,” 100 Thieves tweeted on December 20. “7 Days Out documents our story leading up to the 2018 NALCS Spring Finals.”

The story of this year’s League of Legends Spring Split was a high point for us. @Netflix / @SPTV’s newest show, #7DaysOut, documents our story leading up to the 2018 #NALCS Spring Finals. See the debut of the newest show streaming tomorrow. pic.twitter.com/aOpMlKU3p1

100 Thieves would go on to lose to Team Liquid in that final in what was a heavily one-sided affair, as Liquid dominated their way to a 3-0 victory.

However, despite the loss, the Spring Split was all about 100T and their instantaneous and meteoric rise to prominence in the NA League Championship Series, establishing themselves a force to be reckon with.

Competing for the first time in LoL esports, 100T’s outstanding performances exceeded the expectations of many, as the team finished with a strong 12-6 record, good enough for first place in the regular season. 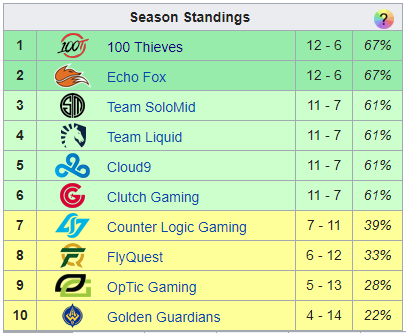 The League of Legends episode of 7 Days Out should definitely be an interesting watch, as fans will be able to see the raw scenes of nerves, jitters, adrenaline, and pure excitement that Ssumday, Meteos, Ryu, Cody Sun, aphromoo, and coach pr0lly experienced prior to their first Split finals as a team.

Not to be forgotten, of course, but the episode will also feature team founder and CEO Matt ‘Nadeshot’ Haag, whose determination as both an esports visionary and a businessman not only made it possible for 100T to have a LoL team, but for it to be as successful as it was that early in its existence.

Can someone tell my dad that I’m going to be on Netflix? Thank you. https://t.co/6tEUuwrZoc

A lot has changed, of course, since the period of time that the show will document, as 100 Thieves have made numerous roster changes, including the acquisition of two-time world champion bot laner Bae ‘Bang’ Jun-sik.

However, as time passes by and less and less people become familiar with 100T’s origins in LoL esports, fans will always have this exciting documentary to go back to for the memories.