Losing due to your own shortcomings is one thing in Hearthstone, but losing due to overwhelming fatigue is a surefire way to grow frustrated. A powerful new Warlock combo has shown just how many cards can be forcibly drawn in a single turn.

With the upcoming expansion, Descent of Dragons shaping up to be one of the most devastating sets to date, one crafty Hearthstone player decided to make a truly filthy ‘wombo-combo’ deck before the meta drastically changes.

In a November 9 post, Reddit user ‘Predicted_123’ showcased a brand new Warlock deck that focuses on pulling off one critical combination in order to make your opponent overdraw in an extreme way.

The Deathrattle effect of the Octosari legendary card ensures that 8 cards will be drawn from your hand. While this may seem like a positive effect at first, thanks to some trickery this card can lead to the downfall of your enemy. 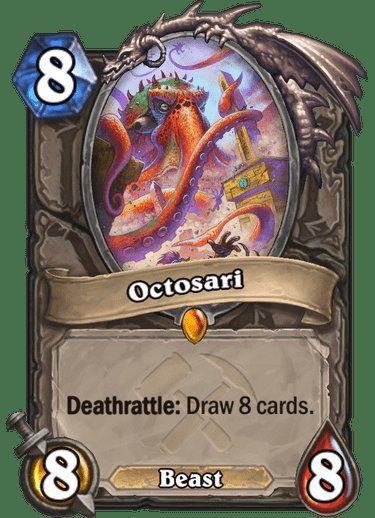 This crazy legendary was introduced in the Saviors of Uldum expansion.
600[ad name=”article3″]

Activating Power Overwhelming on the legendary minion means that the Deathrattle effect will be triggered as soon as the player begins their next turn.

Sending the card to the opposing side of the board through Treachery however, accelerates the process and triggers the 8-card-draw effect at the beginning of the next turn.

Unable to combat the combination in any way whatsoever, the devastating trick forces cards to be drawn and burnt no matter what.

Unfortunately for the Shaman across the field, the situation was worsened by the introduction of Baron Rivendare, a card that doubles the effects of all Deathrattles.

Instead of drawing a mere 8 cards and moving on with their next turn, the opponent was forced into pulling 16 cards from the remainder of their deck. Being so late into the match, this inevitably led to a heaping serve of fatigue damage, enough to end the game in a single turn.

If you’re evil enough and want to inflict this kind of brutality on your opponents, you can find the full decklist here and test your luck.

You certainly need the accurate shot-calling of pro player Dima ‘Rdu’ Radu on your side if you’re going to mimic this ridiculous combo.