Several U.S. Representatives and members of Congress sent a bipartisan letter condemning Activision Blizzard’s ban of professional Hearthstone player BlitzChung after his protest during a broadcast in support of protests in Hong Kong, as shown in a tweet from Rod ‘Slasher’ Breslau.

Hearthstone pro Chung ‘Blitzchung’ Ng Wai was been punished by Blizzard Entertainment after an interview in which he expressed support for the ongoing protests in Hong Kong.

Blitzchung, who is from Hong Kong, wore a mask and stated: “Liberate Hong Kong, revolution of our times,” while the casters (who were also fired from the broadcast) ducked behind their desk.

Timestamp at 35:00 for mobile viewers:

Who sent the letter and what does it say?

The letter was signed by both Democrats and Republicans, including Alexandria “AOC” Ocasio-Cortez (D-NY) and Marco Rubio (R-FL).

In it, they criticize Blizzard for banning BlitzChung and taking his prize money after his demonstration on stream.

“This decision is particularly concerning in light of the Chinese government’s growing appetite for pressuring American businesses to help stifle free speech,” the letter reads. 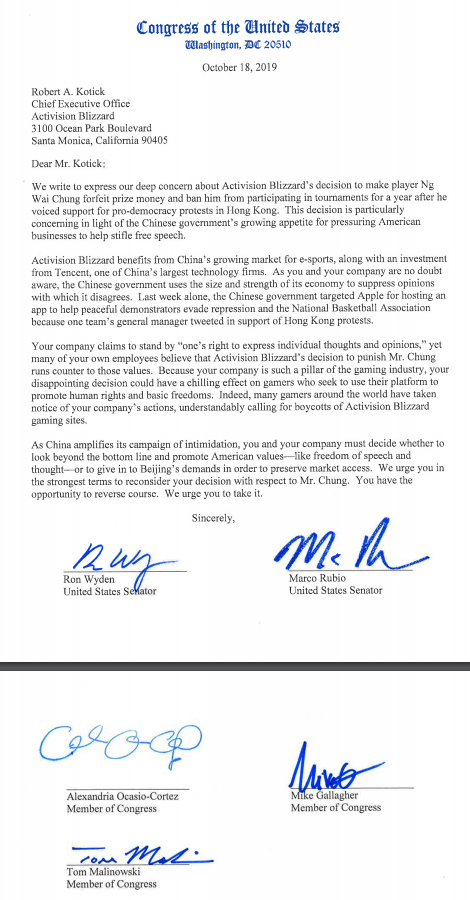 “Activision Blizzard benefits from China’s growing market for esports, along with an investment from Tencent, one of China’s largest technology firms,” it continues. “As you and your company are no doubt aware, the Chinese government uses the size and strength of its economy to suppress opinions with which it disagrees.”

The letter brings up Blizzard’s claimed commitment to “one’s right to express individual thoughts and opinions,” and how a number of the company’s own employees felt the punishment to BlitzChung went against that.

“Your disappointing decision could have a chilling effect on gamers who seek to use their platform to promote human rights and basic freedoms,” the letter stated. “Many gamers around the world have taken notice of your company’s actions, understandably calling for boycotts of Activision Blizzard gaming sites.

note that it looks as if the letter was either written prior to Activision Blizzard reducing the punishment for blitzchung, or everyone missed it and was sent as is

Esports insider Rod ‘Slasher‘ Breslau brought the letter to the attention of the internet when he tweeted a copy on October 18, but noted that it seemed to be written before Blizzard announced a reduced punishment for the Hearthstone pro.

The publisher has yet to respond to the letter at the time of writing. Dexerto has contacted Activision Blizzard for a response and will update the story when/if we hear back.