Joel Thomas Zimmerman, who many people will know as deadmau5, admits that he’s ashamed of trying to justify the use of homophobic slur by suggesting it is part of “gaming culture.”

The DJ had his Twitch channel permanently banned on February 13, after referring to a stream sniper on PlayerUnknown’s Battlegrounds as a “cock-sucking stream sniper f*g” during a livestream.

Zimmerman then publicly criticised the Amazon-owned streaming platform – with what he described as a non-apology – accusing them of censorship and double standards, claiming that his comments were merely some “harmless shit.”

He has since revealed, though, that he was wrong to react in the way that he did – posting another lengthy apology to Reddit.

“I know what I said was wrong,” deadmau5 admitted. “My hastily composed non-apology was an insult to injury. I realize that trying to somewhat dismiss it as ‘gamer culture’ was even worse.

“As for Twitch, they had every right to ban me for that,” he added. “What I said was incredibly stupid and I don’t actually hold those beliefs at all. I let some gamer get the best of me and in that moment I lost control.” 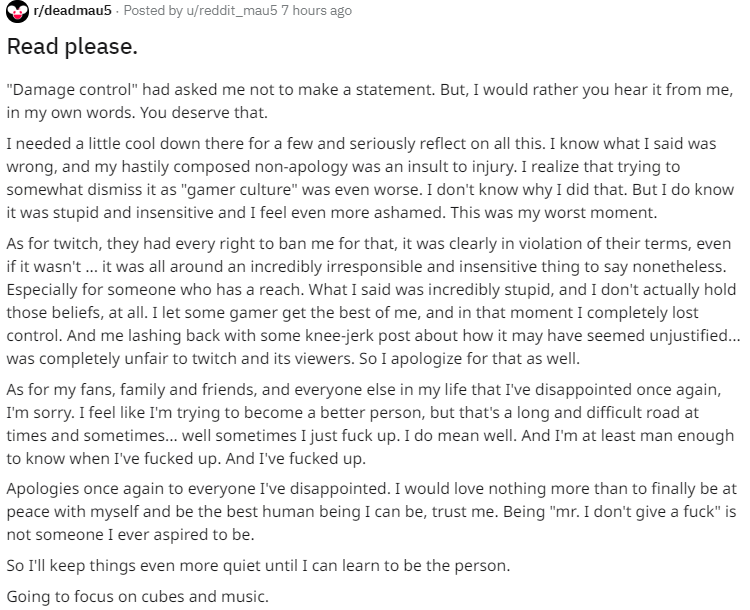 Deadmau5 says that he was advised not to come out with another official statement, following on from his non-apology, but decided to anyway.

Whether or not this apology will be treated as genuine by the public remains to be seen, but having seen Zimmerman come out with this type of response in the past, industry insider Rod Breslau seems to be giving him the benefit of the doubt.

i know joel has made apologies before for similar comments he made last year, but i will give him the benefit of the doubt that this is a sincere apology. for those unaware this is the statement from yesterday https://t.co/Rxman6rQwy

While deadmau5 won’t be on Twitch anytime soon, he’s a known avid gamer and it wouldn’t be a surprise to see him show up on another streaming platform in the future.