Sony have revealed that their PlayStation 4 console, first released in 2013, has now surpassed 91 million units sold, while Microsoft’s Xbox One reportedly lags behind by over half that figure.

Also impressive is the performance of PS4 exclusive titles, like Marvel’s Spider-Man, which has passed 9 million units sold – a mammoth number for a console exclusive released only four months ago.

For consoles, the Xbox One is of second in the current gen standings, but according to a report from VGChartz, Microsoft’s offering is estimated to have sold only 40 million units.

As is common for the second placed console, Microsoft has not announced any official figures at the end of 2018, but these estimates give us some indication of just how much catching up they have to do.

In terms of games, over 50 million copies were sold in 2018 for the PlayStation 4, bringing the total for the console’s five-year run to 876 million PS4 games sold. 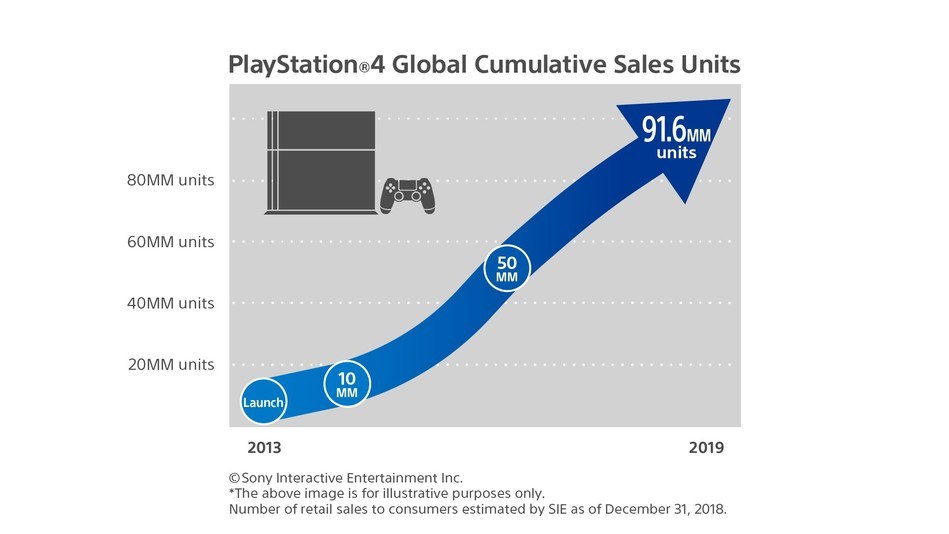 John Kodera, President and CEO of Sony Interactive Entertainment, thanked PS4 players for their support, and also confirmed that nearly all of those unit sales translate to active PSN members, with a total of 90 million at the end of November 2018.

“I would like to express my deepest gratitude to our passionate community around the globe, and our partners, for helping us achieve these milestones. This year, we will bring more enhanced experiences to our fans along with a highly anticipated lineup of games that are only possible on PS4.”

Of course, not all of those users are paying PS ‘Plus’ members, but the number is impressive nonetheless. For comparison, in July 2018, Xbox Live had 57 million users.

In 2019, the PS4 will almost certainly smash through the 100 million mark, with even more exclusives on the way like Death Stranding, Ghosts of Tsushima, Days Gone and the headliner – The Last of Us 2.

There are also rumors that a PlayStation 5 will be at least teased at some point in 2019.