The game, which has taken over five years to craft and perfect, borrows heavily from games such as Smash Melee, Rivals of Aether and Dragon Ball FighterZ to create an extremely combo-centric experience.

The question is: how does it stand out and what are the long term plans for this upcoming game?

Dexerto had a chance to talk with Rushdown Revolt’s Creative Director Chris Kovalik about the game, its esports potential, netcode and how it differs from its competitors. 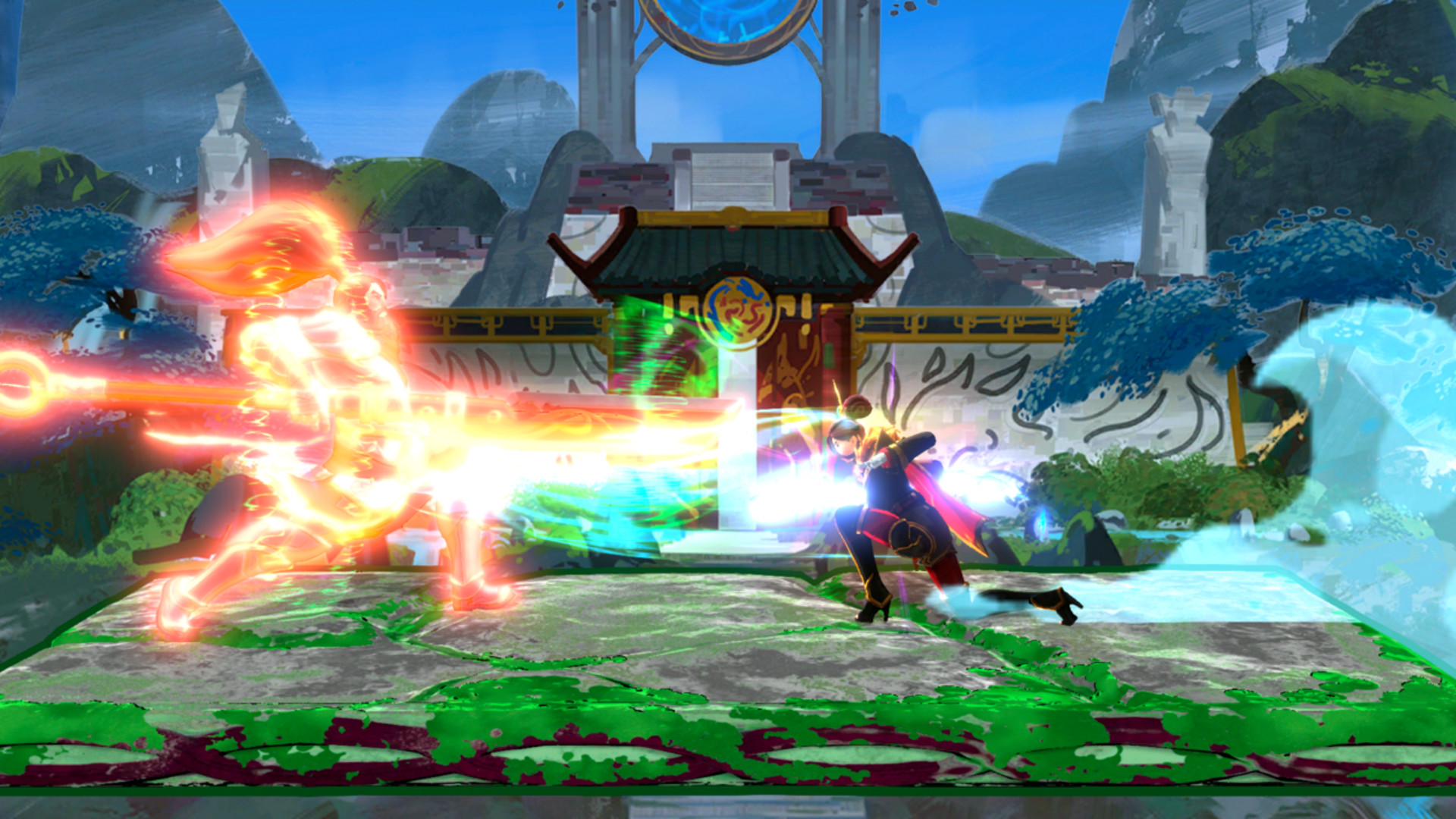 How much would you say the game is inspired by Smash?

I’d say we draw from the speed and expressiveness of Melee, the combo shenanigans of Smash 64 and the accessibility and vibrancy of the latest installments.

If I had to call out one in particular, I’d say we really love the idea that “Melee is Jazz” – in other words, its ability to facilitate distinct playstyles.

With Rushdown Revolt, we wanted to dial that idea to 12/10 by designing a game from the ground up to as expressive as possible. 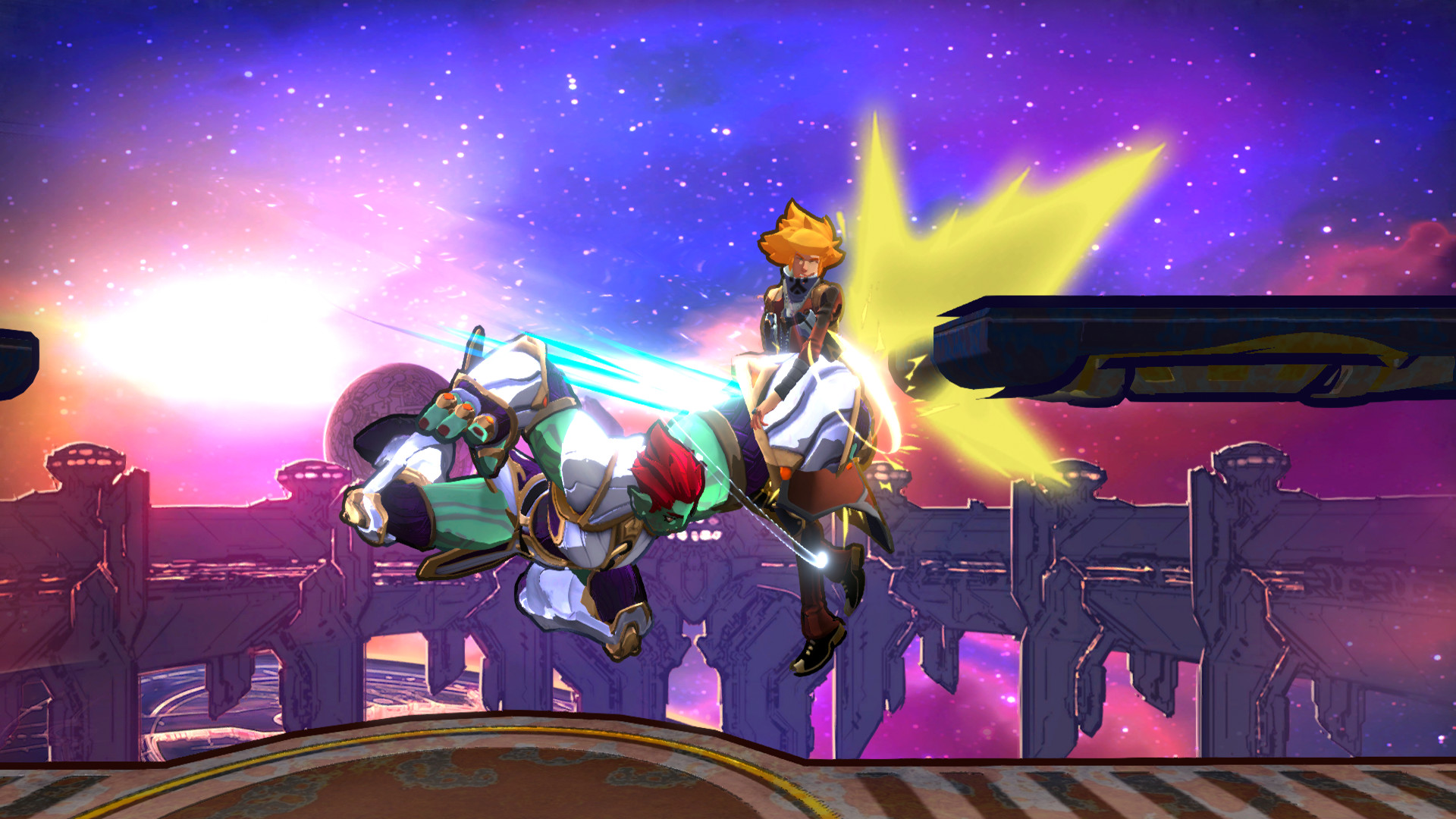 Would you say the game is competing more with Smash or Rivals of Aether?

I’d answer by saying we’re as much of a competitor to Smash and Rivals as we are to Dragonball Fighter Z or Guilty Gear.

I think we accomplish this by taking as much inspiration and influence from non-platform fighters as we do from platform fighters. Almost as if we took Terry Bogard from Smash Ultimate and made an entire game out of the hybrid mechanics he posses.

To name a few examples, we have Health Bars and cross-up-able blocking from Arcade / Traditional Fighters and a Roman Cancels-equivalent from Guilty Gear.

We worked really hard to carve out something that plays differently from every fighting game out there. At the same time, we think our gameplay gives anyone something fun and familiar to play with, no matter what their background is.

Was there ever discussion to use a % based system like Smash?

We use HP, and this was a major discussion point for our team. Our goal was to combine the exciting knockback scaling of traditional platform fighters with the consistency of traditional arcade fighters.

With percentage based health, there’s much more nuance to which moves are best to use at certain percentages, how the opponent gets launched, and how to follow up from there.

On the other hand, traditional fighters’ combo systems make combos reliable and can be practiced and executed at any point.

With our health system, we wanted to take the best of both worlds by effectively creating three clear knockback bands with escalating intensity for gameplay. 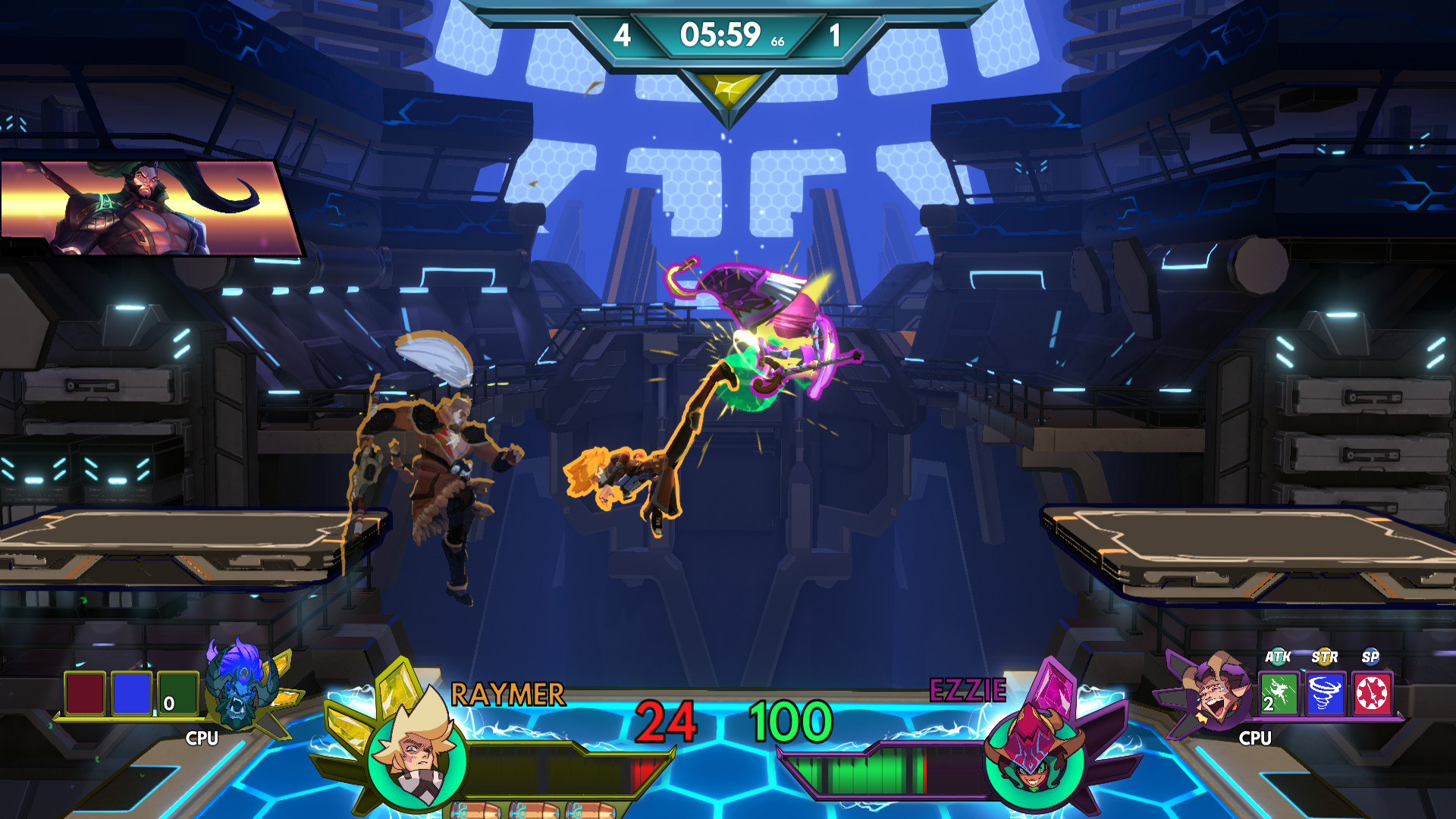 Tell us about the netcode.

We wanted to make a fighting game built for playing online and streaming all over the world.

Vortex Rollback Netcode is probably one of the aspects of our codebase that we are most proud of. The game’s rollback is our branded derivative of (technical warning) Time Synchronized, Deterministic, Lock-step Rollback that GGPO made famous.

Our game plays flawlessly online and supports cross-continental play with reasonably stable connections. We have a couple tricks too that take drive our rollback’s results further.

What are the team’s goals with esports?

Our near-term goals for esports are about starting small. For the near-term, we want to do everything we can to empower you to organize weekly events with 10 people in person (or online) than we are about having a massive prize pool.

To that end, we are excited to lean on our Holos system, which we can use to promote and generate financial rewards for event organizers, sponsors and players.

As for big picture esports or streaming, our hallmark game mode for online play are Gauntlets (a round-robin style brawl), and we’re exploring ways we can make that never-ending onslaught into a thrilling competitive and spectator sport. 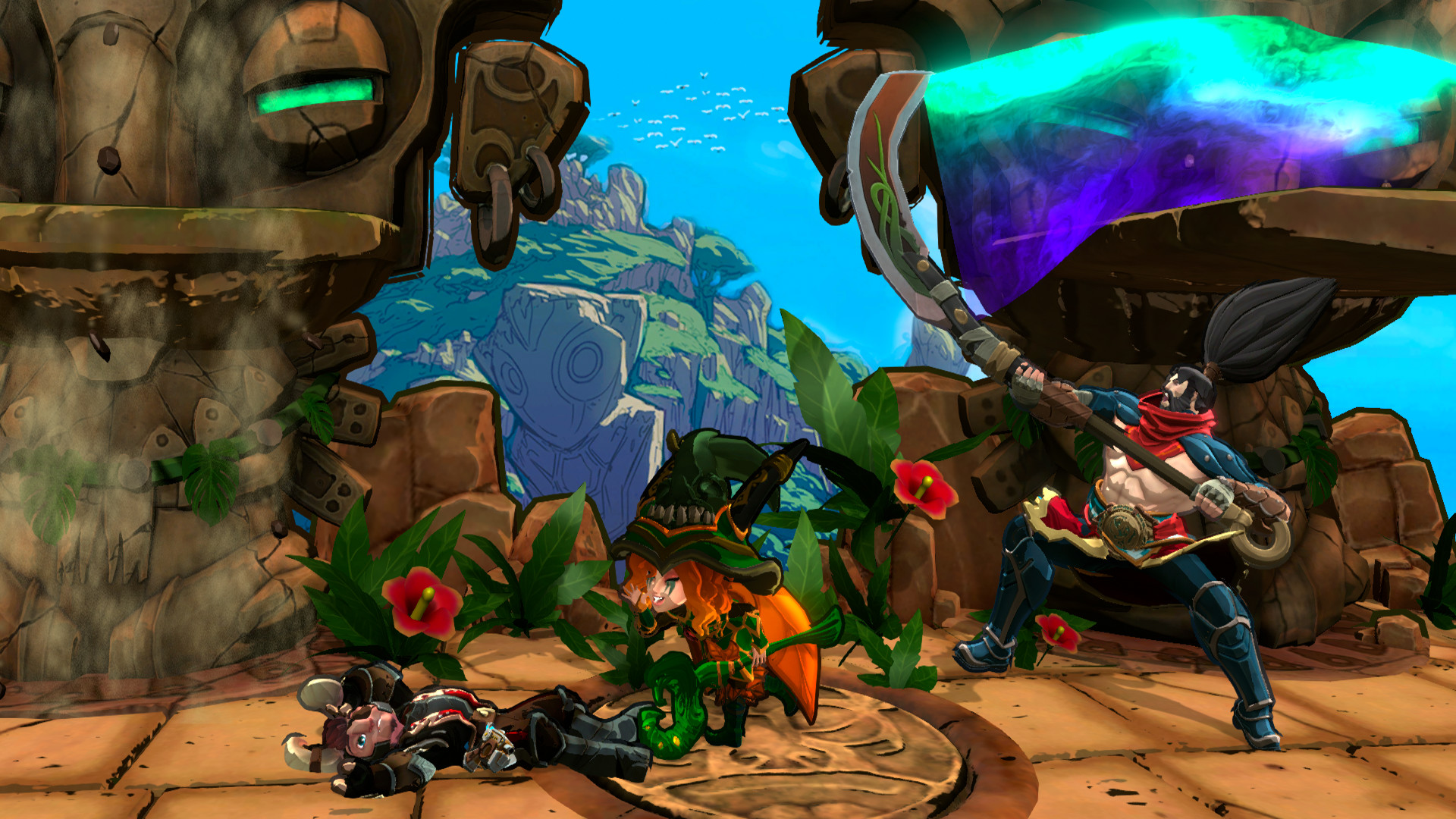 How will the team approach balancing?

Our approach to game balance is first and foremost about making sure things are fair, and that every “overpowered” option has clear and equally strong counterplay.

It comes down to understanding player strategies and whether certain moves are overly centralizing across playstyles and scenarios. Those that never appear or appear too frequently are targets for tuning.

Beyond that, though, it’s vital we remember that things need to be fun, and I want to refrain from overbalancing the fun out. For example, players who spam projectiles will have to be strategic in use because every character is equipped with a Shield Bash move which can reflect projectiles.

How soon can we expect to see new fighters/stages?

Our game is currently in alpha as we are focusing on the core elements of the game.

Once we complete our alpha development this year, we will begin working on new characters for early 2021.

We’re really excited about the current design concepts, because the characters in Rushdown Revolt are heavily redesigned from Icons. Our next characters’ DNA will be entirely our own. 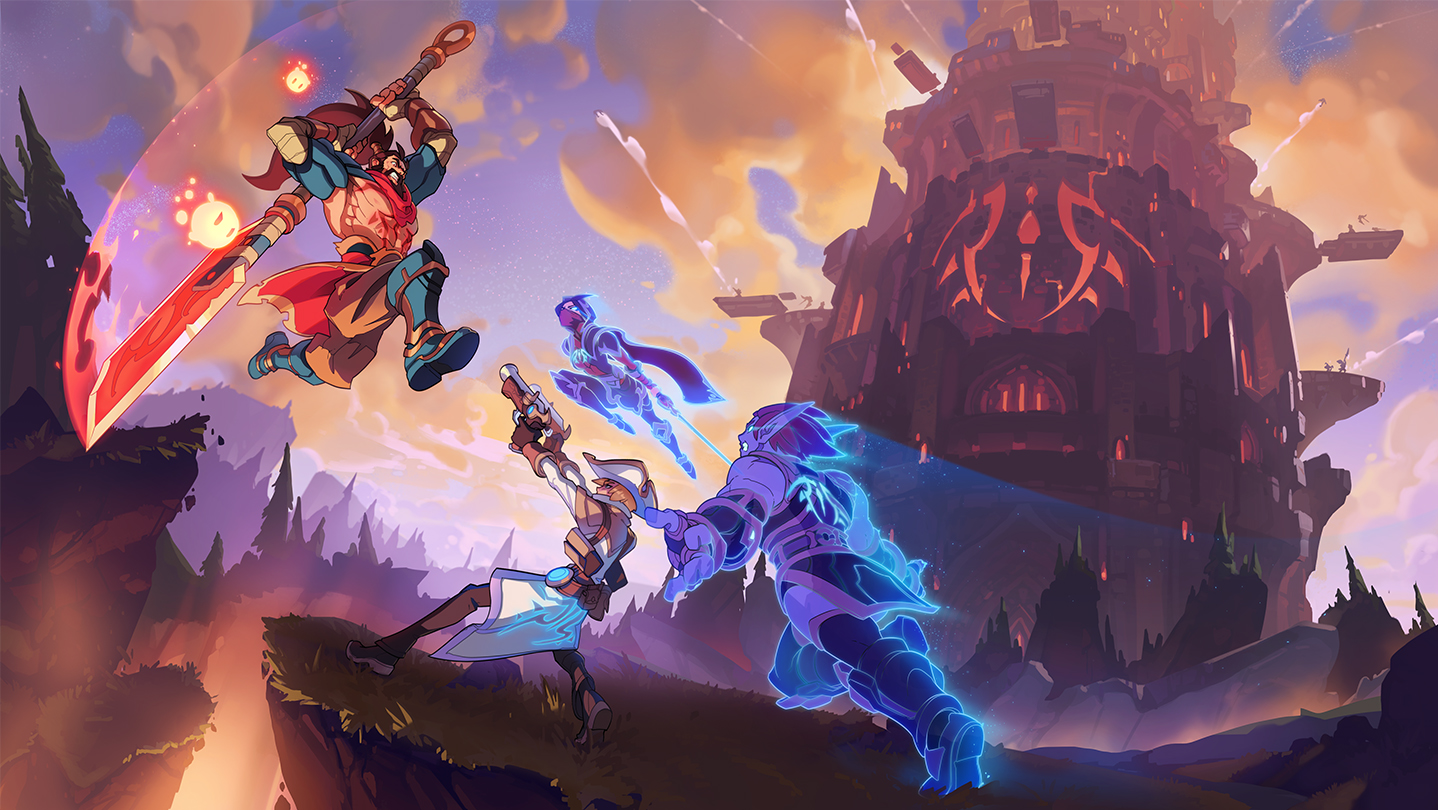 Would you like to do what Rivals has done by adding third party fighters?

Third party intellectual property is one of the most fun opportunities for video games these days.

Fighting games did it first, but its fun to see games like Fortnite introduce new characters or IP into special events.

We’ve already had serious conversations about IP crossovers, so while we’re not sure whether we will fall squarely in one of those two camps (fighters vs. limited time events), we are confident we’ll be doing IP crossovers in some way.