This Week’s Fortnite ‘Summer Skirmish’ Guest Caster Has Been Revealed

The guest caster for the Fortnite ‘Summer Skirmish’ Week 7 tournaments has been revealed.

YouTuber ‘MonsterDface’ has announced that he will be helping host Zeke ‘ZekimusPrime’ call this week’s competition on August 24-25.

Although he was schedule to play in this week’s tournaments, MonsterDface revealed that he will be at the caster’s desk instead via a tweet on August 22.

So I know I told you guys I was going to play this week well …
Well I am Going to be involved instead I’ll just be a guess caster for @FortniteGame #SummerSkirmish! 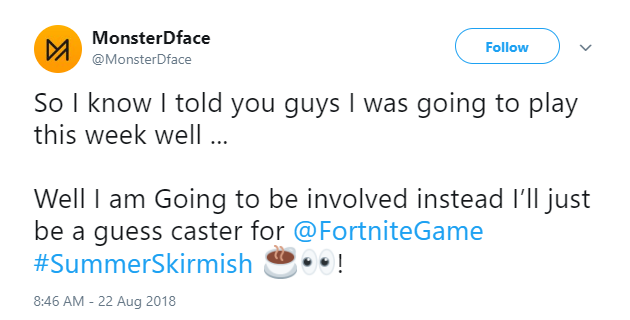 He was understandably very excited and proud to be invited to Epic Games’ studios in Los Angeles to help cast the popular event.

Work hard play hard boys : you guys can best believe I’m excited to talk some Fortnite this weekend on the #Main Stage #SummerSkirmish!

Just got a clean cut 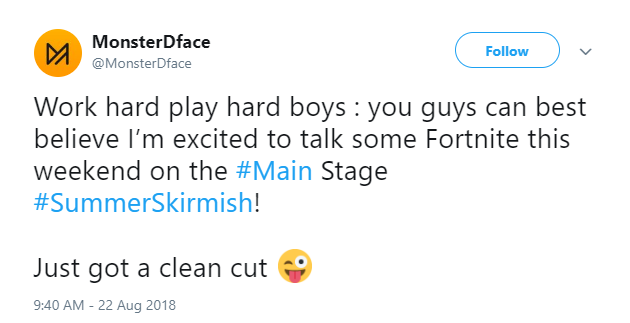 Among the various Fortnite related content that he produces on YouTube, MonsterDface is best known for his in-depth instructional and gameplay analyses videos.

Aside from being a YouTuber, he is also one of the hosts for ‘The Fortnite Podcast,’ which is currently the number one rated Fortnite podcast online. 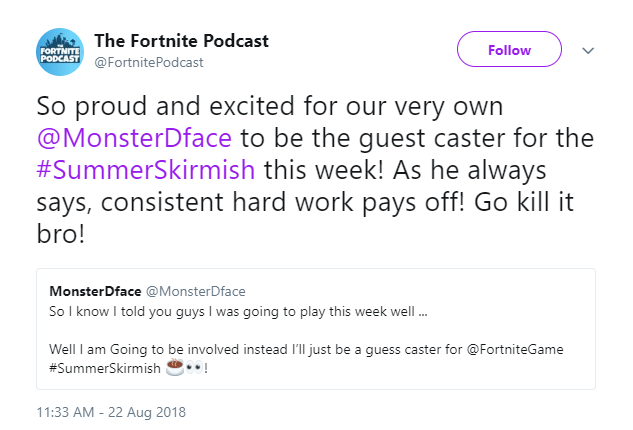 The August 24-25 Summer Skirmish tournaments will make up the seventh week of the eight-week long competitive series, which will have awarded $8 million in prize pool money by the time of its completion.

Just as with Week 6, this week’s event will be hosted in collaboration with Twitch Rivals, and the exact format and list of participants will be revealed in the upcoming days.