There’s always that one squad member who wants to drop at Tilted Towers, even though your team dies straight away every time you go there. However, with this Fortnite concept you would be able to show them why it’s a bad idea.

The idea is simple. There would be a map introduced and available to all players which would show your recent form and relate that to a certain color band, depending on your performances when dropping there.

For example, if you had landed at Dusty Divot a lot in your last 100 games and were really successful there, it would be lit up in red on your heat map.

However, if you had landed at Loot Lake a lot also in your previous 100 games and got a very high amount of deaths there, it would show up in yellow or with no color.

This would give players an indicator of where they usually do quite well  to assist their decision of where to drop, giving them the best possible chance of starting the game with a bang.

Check out the concept idea below, which was posted by u/creatorsellor on Reddit’s very own r/FortNiteBR Subreddit. 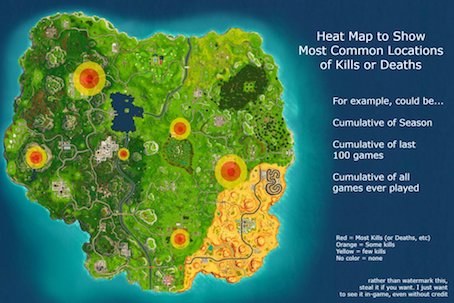 This Fortnite heat map concept is growing in popularity on Reddit.

This feature idea has gone down well in the Fortnite community with 91% of /r/FortniteBR users liking it, and many players making it clear that they would like to see something like this added to the game in the near future.

But where did the idea come from? Well, creatorsellor has an interesting story about that.

“I got this idea sparked because my car tells me my average gas mileage according to the last 25, 50 or 450 miles actually”.

Unfortunately, there are currently no official plans for the heat map to be added to the popular battle royale title by Epic Games, but the developers have added good ideas like this one to the game in the past.