Patch V6.10 just released for Fortnite Battle Royale, but data miners are already hard at work searching for clues and hints at what the future may hold for the popular game.

While searching through the files that came with the update, miners have found some that suggest that the runes in the Fortnite map that were created by the cube (and have since created smaller parts of the island when it has floated over them) may become part of another major event coming in the future.

According to files that are linked to the island, the rune locations will perform five actions during this event: open, focus, pulse, beam and close. 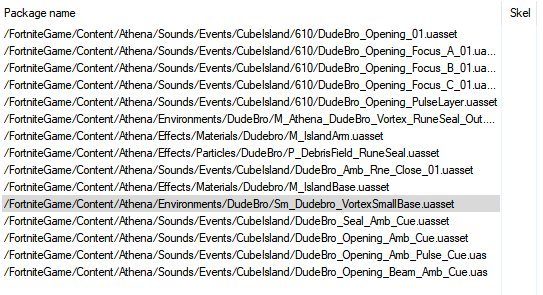 While there is no official information on what these actually mean, it’s interesting to note that that openings appear to be scheduled to open and close. And with beams mentioned, it’s possible they could do damage to players, or provide them with new abilities we haven’t seen yet in Fortnite.

Leakers have also managed to get their hands on new audio files that are directly related to the event. One that appears to be some sort of music, while another involves background noises for the event.

This is the smaller sounds, had to make a separate video for the BIG sound file. pic.twitter.com/t13tS9DMdP

While the files have been added to the game, there is no guarantee that the event will happen, as Epic Games have previously added assets for events that never took place.

Data miners have been hard at working sifting through the new files that came with the V6.10 patch for Fortnite Battle Royale. Upcoming skins have already been revealed, alongside brand new cosmetics.

The V6.10 update brought the new Quadcrasher vehicle to Fortnite Battle Royale, alongside a new Events tab to help keep fans of the game up to date on the latest esports events and tournaments taking place.