June 28th marks the start of Week 9 in Season 4 of Epic Games’ incredibly popular Fortnite Battle Royale and that means one thing: the weekly challenges have been released.

There isn’t long left in Season 4 as Epic Games recently announced that Season 5 would be starting on July 12th.

This means that Battle Pass owners who haven’t yet reached tier 100 for Season 4, and unlocked all of the items and cosmetics that those tiers represent, are running out of time.

Luckily, the seven challenges for Week 9 have now been released and, as anyone that plays the game will know, completing these will speed up the process of reaching that 100th tier significantly.

There are only two “HARD” challenges for Week 9, which include following a treasure map in Haunted Hills and getting four eliminations with shotguns, but there is also a challenge for eliminating opponents in Anarchy Acres that will give you 1,000 XP (which is the same as you get for the harder ones). 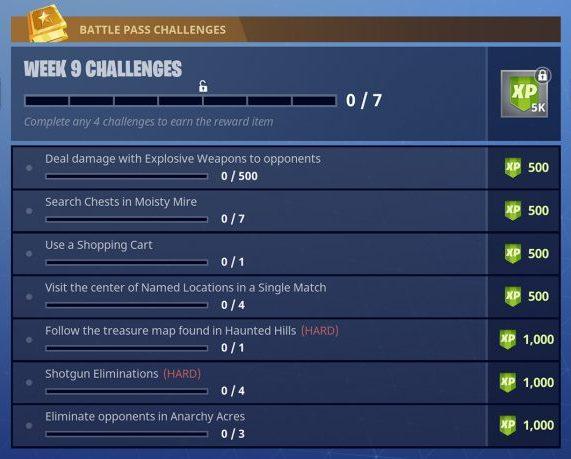 Keep an eye out for our various Challenge Guides which will help you complete them quickly and earn yourself some cool new items!

For those of you that cannot view the image, the challenges for Week 9 of Season 4 are as follows: