Released in a statement on the Epic Games website, the developers of the popular battle royale game confirmed that Fall Skirmish would begin on Friday, September 21, and would run across six weeks, culminating at Twitchcon on October 26-28.

The Fall Skirmish will include two play formats, Competitive and Entertainment, that will allow players in the series more ways to compete, whether it be in ATK races, golf tournaments or other mini-games. Players will still be going head-to-head “high skill competition”, as seen in the Summer Skirmish. 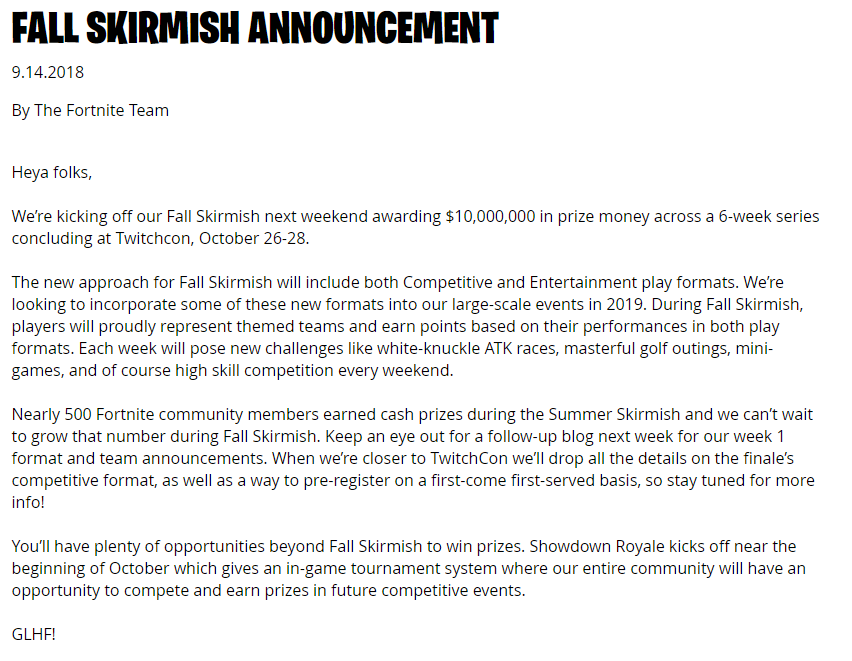 During the Fall Skirmish, players will be separated into themed teams. Each player will be able to represent and earn points for their team in both the Entertainment and Competitive formats of the Skirmish. More details regarding teams are set to be released in a blog post before Week 1 of the series.

Fortnite will also be hosting an in-game tournament named Showdown Royale, giving every player an opportunity to compete for prizes. There’s very few details currently available at this time, but Epic Games have confirmed that it’s set to begin in October.

There’s currently no information about what Week 1 of the Fall Skirmish will actually entail, but Epic Games are set to release a further statement next week with more information.

Epic Games will also release more information about it’s Twitchcon event in the future, along with information on how to pre-register for the tournament.