Mark Rein has made it clear that the Epic Games loves seeing Tyler ‘Ninja’ Blevins attract more viewers to his restream of the Fortnite Summer Skirmish Grand Final than the official Fortnite channel!

Esports journalist Tyler ‘Fionn’ Erzberger took to Twitter to say “Ninja has more viewers for #SummerSkimrish Grand Final restreaming it than the actual Fortnite channel” and suggested that “Riot would probably ban his Twitch and fine him 5k” if a League of Legends pro like Søren “Bjergsen” Bjerg did the same thing.

But Epic Games’ Vice President was quick to respond, saying “We love this!!!” before congratulating Ninja and thanking him for his support of the competition: 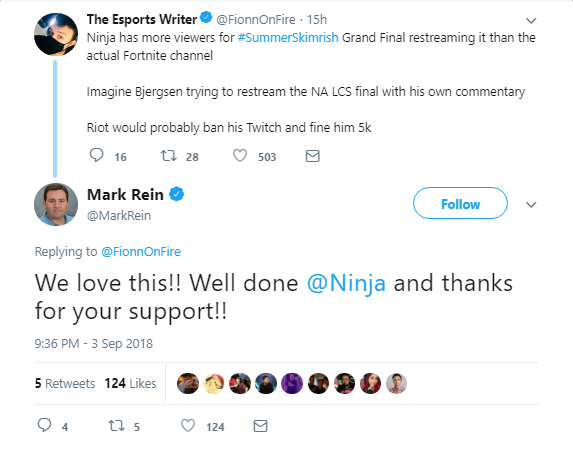 While some might have assumed that Ninja’s stream pulling in more viewers was a sign that he is “bigger than Fortnite”, the developers of the game are clearly more than happy to see the game’s biggest star continuing to find success.

In response to Rein’s Tweet, Ninja simply said “Epic is everything” – once again vocalizing his support for the company he has often credited with “breaking the standards” in esports and gaming.

The final event of Fortnite’s Summer Skirmish Series was won by Morgausse. Relatively unknown coming into the event, Morgausse beat the likes of Tfue, Poach, 72hrs and Nate Hill to take home $225,000.

Ninja restreamed the conclusion of the event on his personal Twitch channel and added his commentary to that of Jack ‘CouRage’ Dunlop and Ben ‘DrLupo’ Lupo, who casted the games on the official Fortnite channel.