The “Refund” feature for Fortnite Battle Royale, which allows players to refund purchased cosmetics for the very first time, looks set to return before the end of May.

The V3.6.0 patch for Fortnite Battle Royale was released on April 24th, introducing a number of new bug fixes and items, including the all-new clinger Grenade.

One of the biggest changes was the all-new “Self-Service Cosmetic Returns Feature”, which allowed you to return a total of three cosmetic purchases for V-Bucks.

Eligible items for the refund feature were Emotes, Gliders, Harvesting Tools, Back Bling, and Outfits but it only allowed a total of three refunds and it had to be used within 30 days of an item being purchased.

The feature was well received by the Fortnite community but it didn’t last long as Epic Games disabled it temporarily on April 24th due to an undisclosed issue.

There have been a number of rumors about when the feature will return but a change to its status on the official Fortnite Trello board shows it as “Fixed In Next Release” which means it should return in the next update. 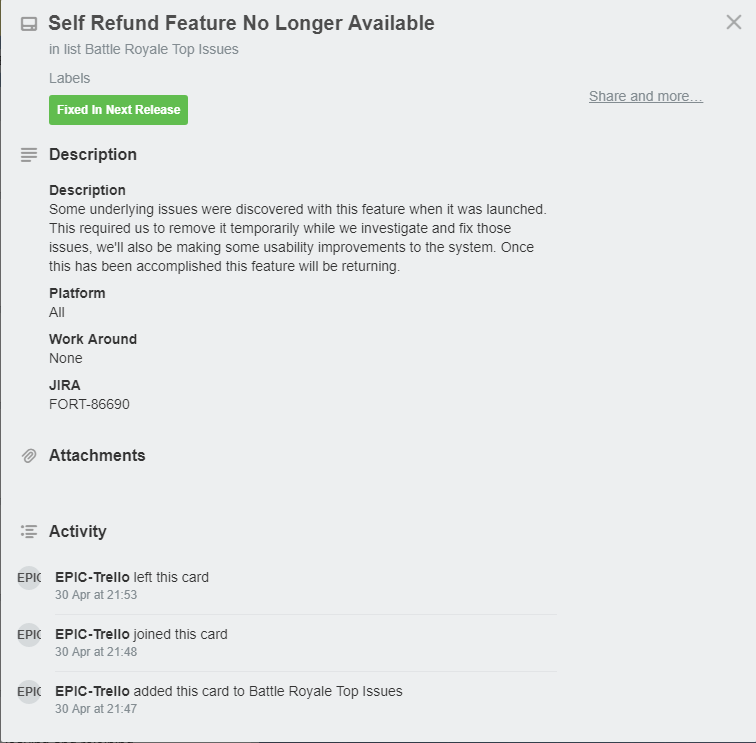 The next major update is likely to be released on Tuesday, May 29th so players could be refunding their unwanted items again in no time.

A leaked email on May 21st seemed to show Epic Games stating that the refund feature would  “be live by June 1st”. Some people took that to mean “on” June 1st but the new information suggests that “by” was the important word in that sentence.

The function should also return with “some usability improvements”. Whether this means there will be any changes to the limitations is currently unknown.