New reports about Fortnite’s viewership on Twitch suggest that the game that has dominated all competition in 2018 is beginning to lose its stranglehold on the top spot.

According to new data that was released my StreamElements, released just before TwitchCon 2018 got underway, Twitch viewership for Fortnite peaked in July and has been on a slow but steady decline ever since.

Before you start writing up you obituary for the Epic Games title, it’s worth noting that, while viewership has declined somewhat, Fortnite is still comfortably ahead of virtually every other game on the streaming platform owned by Amazon.

However, the data does show that viewership in September was the lowest that it has been since February and around 30% lower than it was in July, dropping from the dizzying heights of 151.9 million hours watched to 105.8 million last month (a number that would still be record breaking for just about every other game). 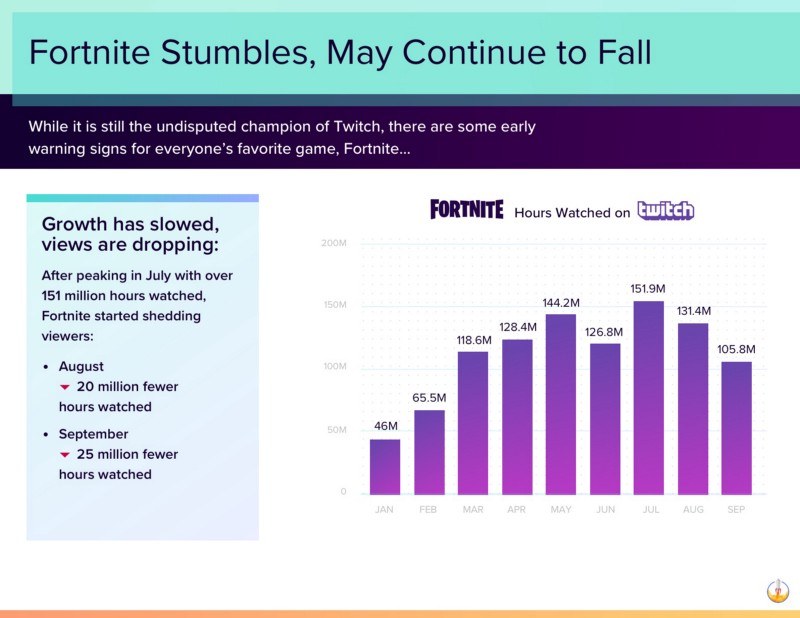 Fortnite viewership hours skyrocketed from 65.5 million in February to 118.6 million in March – the same month that Ninja smashed the concurrent viewership record for a solo streamer while playing with Drake.

The game has remained untouchable ever since but interest seems to be shifting, especially with the release of new games like Call of Duty: Black Ops 4 and Blackout. Blackout’s incredibly popular beta took place in September, which might explain some of Fortnite’s dip in viewership for the month.

With ongoing competitions like the Fortnite Fall Skirmish Series, it’s still surprising to see such a drop-off and, as StreamElements suggests, this could be an ‘early warning sign’ of things to come.

StreamElements’ data concurs with recent findings from Thinknum that showed the average daily viewer count had dropped from 305,000 in July to 182,000 in October, even dipping below 90,000 at times in late September.

Whether this is a worrying sign for Epic Games and the Fortnite team is uncertain, but it definitely shouldn’t be taken as a sign that the game is dying – we’re willing to bet that Fortnite will be on top, or very near to the top, of the Twitch charts for quite some time.

You can read the full report from StreamElements here.