A new item called “Bouncer” is coming soon to Fortnite: Battle Royale, and it appears to be a revamped version of a similar item that was removed from the game long ago.

The Message of the Day in the pregame menu shows the new Bouncer with a light blue background and is officially noted to be coming soon.

On the announcement screen, the new item is caption with the following description:

Place this pad for a bounce boost – no fall damage! 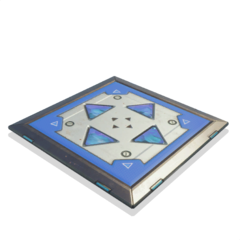 Judging from the image and the wording used in the caption, the new Bouncer item will give players a big, aerial boost in whichever direction they choose.

However, it appears that the way it will differ from the Jump Pad that is currently in the game is that players will not be forced to use their Gliders to slow down their fall, since this new item will not inflict fall damage.

The new Bouncer is sure to remind veteran players of Fortnite: Battle Royale of the old jump pad type item that existed during Season 1, but was removed shortly thereafter.

The addition of this new item appears to be part of a trend from developer Epic Games to promote action and movement that involves flight, as the Bouncer will join the Jetpack and Hop Rocks as the new aerial items that have been introduced so far in Season 4.