The major event involving the mysterious Fortnite cube that marked the start of Season 6 might not be the last development in the object’s story.

The large purple cube, affectionately named ‘Kevin’ by the Fortnite community, first appeared on the map in Season 5 and began moving around the map, leaving strange runes on the ground as it did so.

Eventually it made its way to Loot Lake where it promptly melted and formed a strange, bouncy purple layer on top of the water’s surface for a number of days.

At this point it was generally accepted that there would be some form of cube-related event to mark the start of Season 6, and anybody that thought that was proven correct in the September 27 V6.0 patch when the cube rose out of the lake with the island on top of it!

The cube has created numerous ‘corrupted’ areas of the map and the floating island has all sorts of cool aspect to it, but some eagle-eyed fans of the game have already started to collect evidence to suggest that there is more to come: 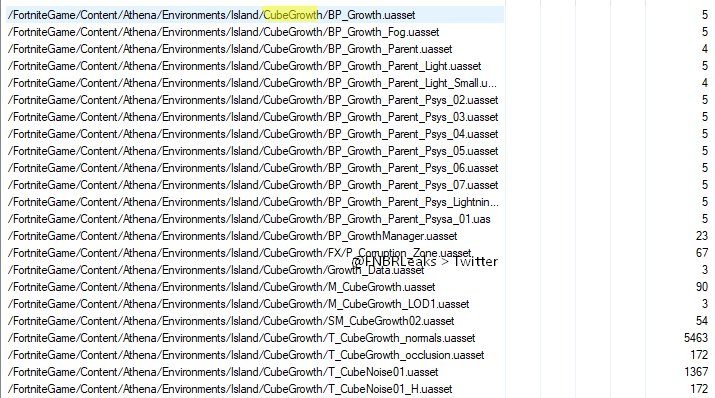 The well known data mining account known as FNBRLeaks on Twitter leaked some files related to the game that seem to suggest that the cube will grow throughout the season, as seen in the image above.

But that’s not all! Numerous players have also reported seeing the floating island above Salty Springs while playing in Playground mode, a huge distance away from Loot Lake.

It is currently unknown whether this particular phenomenon is a glitch or an intended movement feature that has accidentally been implemented in Playground too early.

Some players are reporting seeing the Floating Island in different areas around the new #Fortnite Map in Playground. It's currently unknown if this is a glitch or the start of an in-game event (via @D_YouTuber_). pic.twitter.com/7YdglNMgU4