Epic Games are bringing back some classic weapons and items as part of Fortnite Chapter 2’s ongoing Winterfest event, and the whole list of things they plan to unvault has been leaked.

With the holiday season in full swing, Epic Games launched the Winterfest in-game event in Fortnite on December 18, turning the popular battle royale into a winter wonderland.

As part of the event, the developers announced that they will be unvaulting some of the items and weapons from the game’s earlier seasons, each one to be available for a single day before going back into the vault.

Winterfest is underway in Fortnite!

As is the norm, dataminers were able to forage through the event’s game files and find the full list of everything that Epic plan to unvault during Winterfest.

Here is the full list of weapons and items that Epic will reportedly be bringing back from the vault each day over the course of this 21-day event, with there being some repetitions along the way.

This leak comes courtesy of HYPEX, one of the community’s most reliable and prominent dataminers. 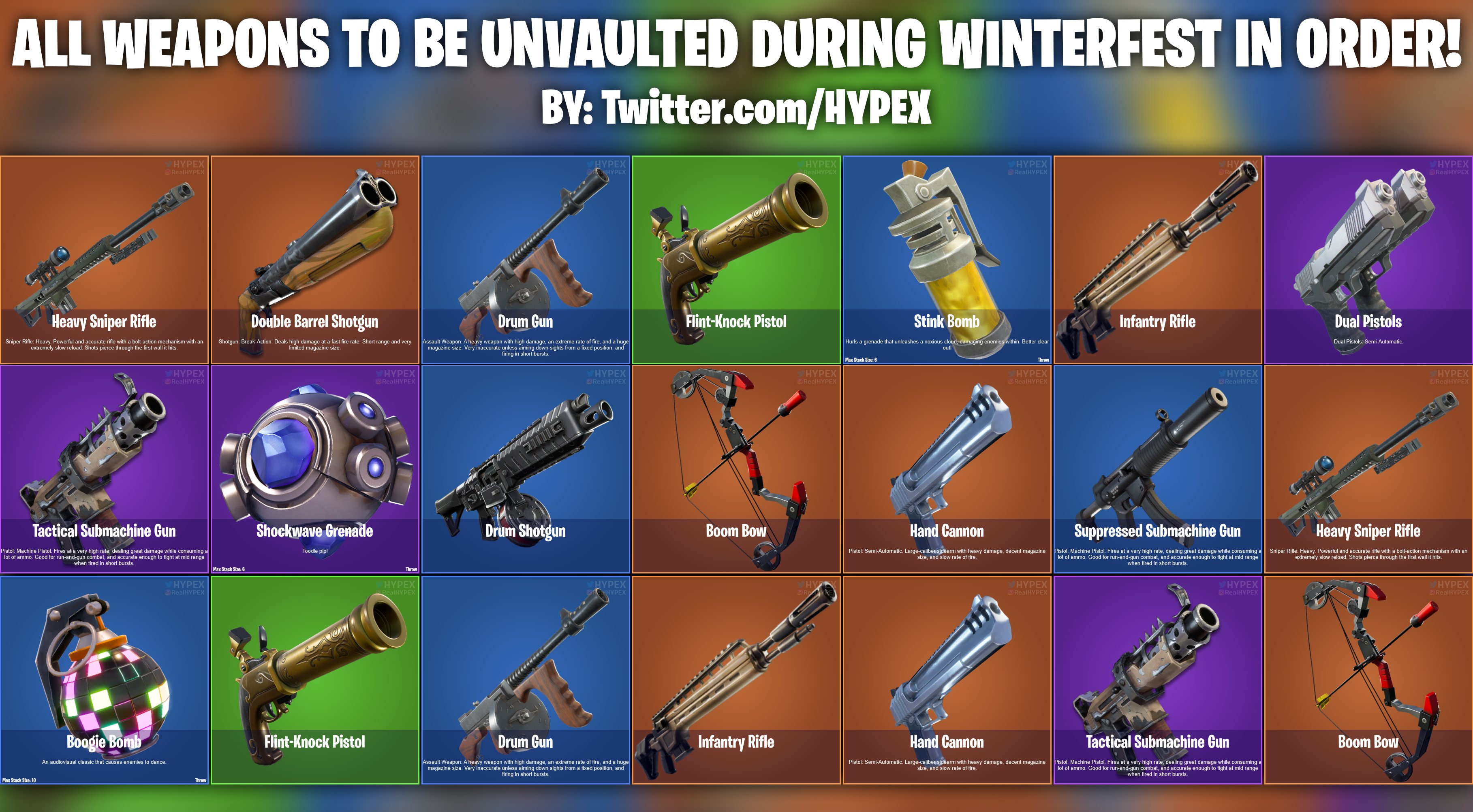 Every Fortnite weapon and item that will be leaked during Winterfest in order.

According to HYPEX, the order with which the weapons and items are listed in the graphic above is the same order that Epic will be releasing them back into the game, each for a single day before going back into the vault.

It must be noted that, for whatever reason, Winterfest was delayed a single day after Epic initially announced it was supposed to launch on December 17. Thus, the list effectively starts at the second weapon – the Double Barrel Shotgun.

This list falls in line with how long Winterfest will reportedly go on for, with leakers determining the end date to be January 6.

We’ve brought back the Double Barrel Shotgun for one day only! #FortniteWinterfest pic.twitter.com/zyNcnfajx8

The first weapon to be brought back was the Double Barrel Shotgun on December 18. The most powerful shotgun to ever exist in the game, the Double Barrel was first introduced back in Season 5 before being vaulted at the start of Season 7.

As mentioned above, the reason the event started off with this weapon and not the Heavy Sniper Rifle is that the first day was effectively skipped due to the delay of the Winterfest launch.

We’ve brought back the Drum Gun for today! #FortniteWinterfest pic.twitter.com/UGFKuErvbG

One of the most controversial weapons in the game, the Drum Gun was brought back from the vault on December 19, and not for the first time.

Initially introduced during Season 4, the powerful gun was repeatedly nerfed and eventually vaulted before returning during the in-game voting event that took place in Season 8.

However, because of how versatile and overpowered it is, Epic ended up vaulting it for the second time in Season 10, but now it’s back for players to enjoy, albeit for only a single day.

The Flint-Knock Pistol is one of the more interesting weapons in Fortnite because it not only has the capability to inflict damage but it also knocks players around. Thus, many used it as not only a gun but also a mobility device, shooting it into the ground to propel themselves high into the air.

It was first introduced during Season 8 but then vaulted at the start of Season X. However, the devs did return it just a few weeks later only for it to get vaulted for a second time at the start of Chapter 2.

The Stink Bomb makes its smelly return for one day only! #FortniteWinterfest pic.twitter.com/wE5rd0zrpe

This unvaulted weapon really stinks. The Stink Bomb is the first explosive to be unvaulted for the Winterfest update. The poisonous cloud it creates lasts for 9 seconds and does 5 damage per half-second, bypassing shields. It can harm the thrower, but not the thrower’s teammates.

The Stink Bomb was introduced in Season 4, but was vaulted in Season 11 with the new chapter.

The Infantry Rifle uses medium bullets and has a headshot multiplier of 2x. What’s more, it is 100% accurate when aiming down sights making it excellent at taking out enemies at a distance.

While all variants of the Infantry Rifle was vauled in Patch 11.0, its return should be a welcome one, even if it is for a single day.

The Dual Pistols make their return for one day only! #FortniteWinterfest pic.twitter.com/T2Cp1PZcCa

Despite appearing overpowered on paper, the Dual Pistols never really became a part of the meta after being first introduced during Season 4. Its huge dropoff at range made it a liability, and there were always better close-range weapons to use in its place, such as shotguns and SMGs.

This will be the first time that Dual Pistols have been in Fortnite since they were vaulted during Season 9.

The Tactical SMG has been a journeyman weapon of sorts in Fortnite – having been in the game for a long time but undergone several changes throughout the seasons. It was first introduced all the way back in Season 1 but was vaulted at the start of Season 5, in order to make room for the regular SMG.

However, it was brought back several months later during Season X, replacing the Burst SMG, and Epic even added a gold Legendary version for the first time ever. It was vaulted for a second time at the start of Chapter 2, as the developers opted to keep the regular SMG as the only weapon of its kind in the game.

The Shockwave Grenade makes its return for one day only! #FortniteWinterfest pic.twitter.com/pGBkfk6PjE

Not many items in Fortnite have been powerful enough to establish their own meta, but the Shockwave Grenade has definitely been an exception. Initially added during Season 5, the mobility device was vaulted at the start of Season 7 before returning again during Season 9 in place of Impulse Grenades.

During Season X, particularly in the first-ever Fortnite Champion Series, the Shockwave Grenade could be found in most players’ inventories at all times, as it was one of the few legitimate ways that players could speed up their mobility. However, it was vaulted again at the start of Chapter 2.

Of the weapons and items that have been unvaulted so far in Winterfest, the Drum Shotgun is by far the newest one. It was first introduced about halfway through Season 9 before being vaulted in Season 10.

When it was first removed, Epic Games didn’t really provide a reason or explanation, but the shotgun was considered by many to be too powerful due to its automatic and high fire rate.

The Boom Bow was first added in Fortnite during Season 8 but was subsequently vaulted several weeks into Season 9. It quickly became apparent that the weapon was way too powerful to exist in a battle royale because it shredded through players’ health and shield very quickly.

The Hand Cannon is a heavy pistol that packs quite a wallop. The Hand Cannon uses heavy ammo instead of light ammo, and deals 75 damage to players and 100 damage to structures. It can take out a freshly built stone wall in just one shot. It was vaulted at the start of Chapter 2.

Very few weapons have been in and out of the Fortnite vault as much as the Suppressed SMG. One of the earliest guns in the game, the Suppressed SMG was first added in Season 1 before all of its variants were vaulted at the start of Season 6. It was brought back to the game in Season 7.

It was vaulted for the second time, in Season 9, but unvaulted again just a couple of updates later, because of the Tactical Assault Rifle being taken out. However, with Epic wanting to limit the weapon pool at the start of Chapter 2, it was taken out of the game for the third time in the v11.0 update.

Steady your shot. The Heavy Sniper Makes its return for today only! #FortniteWinterfest pic.twitter.com/pF9jBSw39c

As the name suggests, the Heavy Sniper Rifle was the most powerful weapon of its class in Fortnite, and one of the most damage-dealing the battle royale has ever seen.

It was added during Season 5 and lasted for nearly another five seasons, as it was vaulted at the start of Chapter 2. It’s not clear exactly why Epic took this weapon out – either it was too powerful or they were simply trying to limit down the sniper class to just a single gun.

Dance the night away. The Boogie Bomb makes its return for today only! #FortniteWinterfest pic.twitter.com/nTnAInABzP

The Boogie Bomb was one of the first real ‘fun’ items added to Fortnite, way back in Season 1. Players learned quickly not to take the disco ball-looking grenade lightly, as it was an item that could always shut down any player, whether they be a novice or pro.

It was also one of the very few items/weapons that lasted all the way through until the start of Chapter 2, when it was finally vaulted due to Epic wanting to limit the pool of items and weapons in the game.

Always keep in mind that nothing should be considered official until formally announced by Epic Games, which means the leaked information presented above is subject to change at any time at the discretion of the developers.