It looks like all the rumors about Jetpack finally coming to Fortnite Battle Royale were true as a new in-game message has now appeared to confirm it.

Jetpacks were teased for Fortnite Battle Royale back in February of 2018 during Season 3 but the idea was eventually left at the wayside due to a “design flaw” that the developers said they needed to work on.

The idea of Jetpacks in the massively popular Battle Royale game has been met with both excitement and apprehension from fans as they consider just how powerful it could be in the right hands.

News of the item’s potential inclusion in an update has popped up on a number of occasions ever since but nothing was set in stone until May 21st when a new in-game message appeared.

It looks like the Jetpack will initially be a “limited time item”, presumably meaning that it will be included in the next Limited Time Mode but perhaps simply placed into the standard game for a short while as the developers figure out the community reaction.

The only information given is “Take the fight to new heights”, which doesn’t really tell us anything more than we already knew. 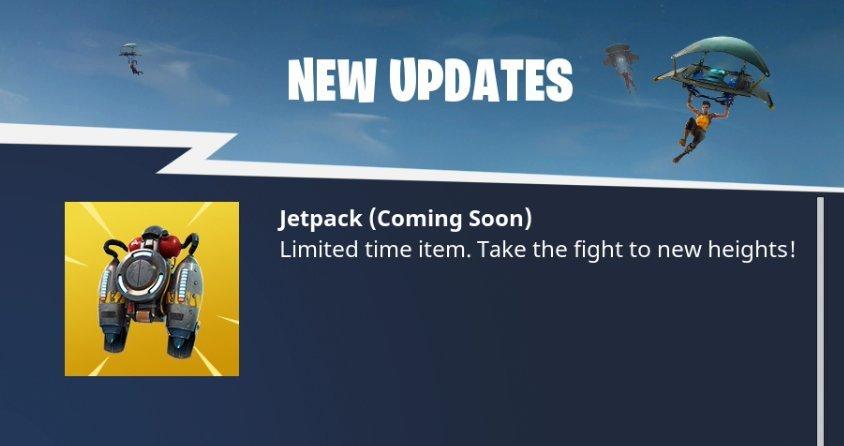 The Jetpacks should become available in an update some time in the coming week and we’ll keep you updated on everything when they do.

How would you like to see Epic Games implement the Jetpacks? Personally, we hope that they can’t be used permanently as we want building to still be an aspect of the game.