How to get free Fortnite Lt. Evergreen skin on PC, PS4, Xbox One, mobile - Dexerto
Fortnite

How to get free Fortnite Lt. Evergreen skin on PC, PS4, Xbox One, mobile

The holiday season is very much in full swing in Fortnite, and Epic Games are in a giving mood. One of the distinct features of the Winterfest in-game event has been Fortnite Presents, which players can open each day to receive free items, such as gliders, pickaxes, music packs, and more.

Epic had previously announced that, at some point, these presents would include two outfit skins – Lt. Evergreen and Whooly Mammoth. On December 24, with Christmas fast approaching, Lt. Evergreen was made available for free.

The character closely resembling Jonesy dressed in military-style clothing. However, he’s not exactly the most formidable lieutenant, as there’s a large Christmas tree draped over his head and shoulders.

“Just a tree here, move along,” reads the item’s official description. Lt. Evergreen also comes with the Re-Gifter back-bling, which is a green-and-yellow wrapped present. 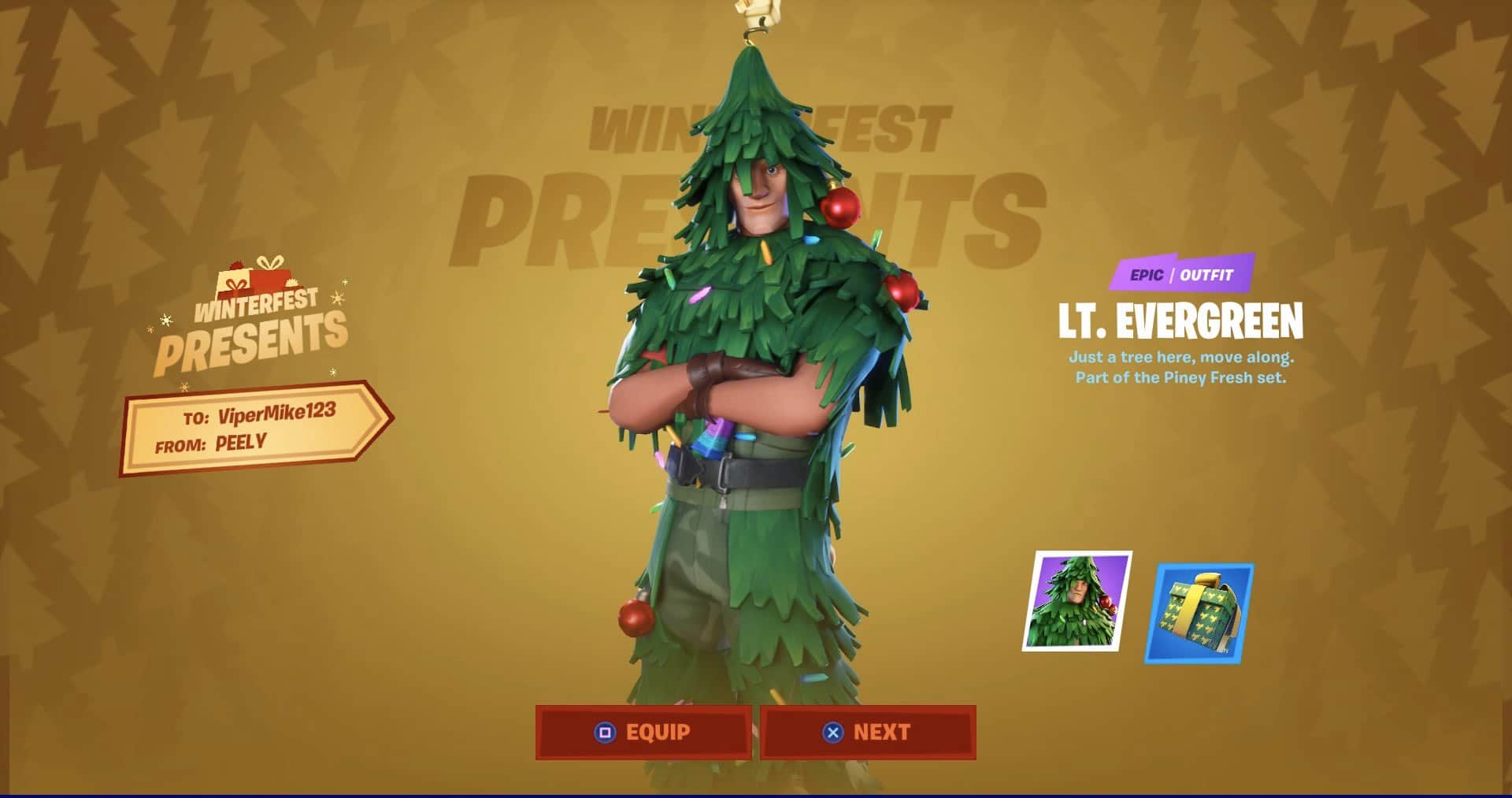 Everyone can redeem the Lt. Evergreen and Re-Gifter back-bling for free.

How to unlock Lt. Evergreen skin for free

In order to unlock this new skin, you must enter the Fortnite Winterfest cabin and click on the Christmas tree located on the right side of the screen.

Once the camera pans closer, you will have to click on the tree again after scrolling over it and seeing the message “Just a tree” pop up on the screen.

Once that step is complete, a message will pop up announcing that you’ve unlocked both the Lt. Evergreen skin and his Re-Gift back-bling, both of which will be added to your inventory.

You’ll know for sure that you’ve gotten the items once you exit the message and see Lt. Evergreen standing in the place of the tree you had just searched moments earlier.

You can claim the Christmas tree skin for free! #Fortnite pic.twitter.com/sYPhM3wgiK

When this skin was first made available, players on PC, Xbox One, Nintendo Switch, and mobile complained about having issues while trying to redeem it. The only platform that seemed to not be having any problems was PlayStation 4.

Epic initially acknowledged the issue and said they were working on fixing it, and a short while later announced that the problem had been resolved and all players who were having difficulties would get the items in their inventory.

The issue where players are unable to redeem the present in the lodge has been resolved. Enjoy your presents!

As of now, the only platform that doesn’t yet have access to the skin is PC, because the files for the items are still encrypted and not added to the front-end of the game. However, it’s likely that Epic will make it also available on PC very soon, especially with it already being Christmas.