The competitive Duos tournament for week three of Fortnite’s Fall Skirmish series has concluded for both the European and North American groups.

Team Sentinel’s ‘Aspect’ and Team EnVy’s ‘LeNain’ were the champions on the NA side of things, and competitive player ‘Slugg’ and Team Atlantis pro ‘Mitr0’ the victors in the EU group, with Mitr0 winning his second straight Fall Skirmish event.

Both teams secured $67,500 as the prize for finishing first, as well as a crucial 305 points for their respective Clubs – Lucky Llamas and Rift Raiders.

In order to better understand the recap, look over the details of the six-match Duos format used for this week, called King Pin.

Aspect and LeNain, of Team Sentinel and EnVy respectively, put in an incredible 16 point performance to earn the top spot in the NA group.

Their Victory Royale was crucial down the stretch, as it game them the 2x multiplier for the following match.

They were followed by Ghost Gaming pro ‘Bizzle’ and free agent ‘psalm,’ who accumulated 13 points and took home $47,500, while also earning 215 points for Fort Knights.

Pro player ‘Saf,’ also of Ghost Gaming, and YouTuber ‘Nicovald’ came in third with 12 points, securing $36,250 and 215 points for the Fort Knights.

With the top three placings of Bizzle and Saf, Ghost yet again proved their prominence in competitive Fortnite, as they had three players finish in the top 10 (Ayden came seventh)

Just like that, #GhostFortnite took over #FallSkirmish Week 3 and claimed 3 of 6 Victory Royales for the day. pic.twitter.com/7zZXgSZH0i

On a side note, the $50,000 bonus for most elimination in a single match was claimed by FaZe Clan’s ‘Cloak,’ who dropped 15 kills. He also managed to finish in eight place with partner ‘Chrispy,’ meaning their total winnings added up to $60,000. 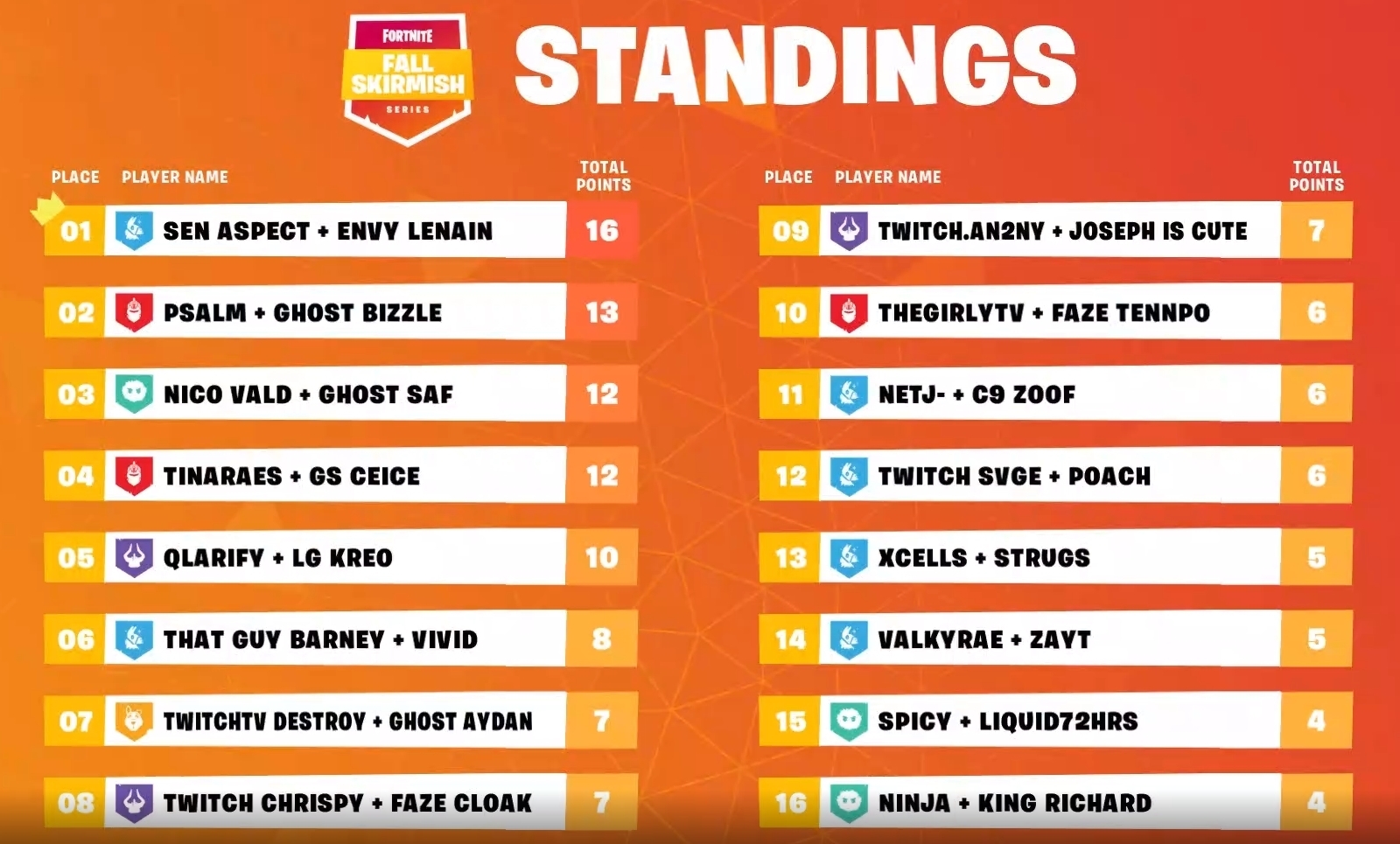 The top 50 placing teams for the NA group can be seen by clicking the link below:

Mitr0, the pride and joy of Team Atlantis, and his partner Slugg were able to secure 15 points to claim first place, taking full advantage of the point multipliers they obtained due to a crucial Victory Royale.

They were followed by the Team Solary pro player pair of ‘Hunter’ and ‘Kinstaar,’ who were also the champions of the week one Duos event two weeks ago.

The top three was rounded off with Finnish competitive players ‘Viallinen’ and ‘Windwalker,’ who got 10 points to not only take home $36,250, but also 165 points for the Fort Knights.

The top 50 placing teams for the EU group can be seen by clicking the link below:

With the players from both EU and NA being part of the same Clubs, the points accumulated by the top ten teams of both regions have been combined to calculate the current Clubs standings.