The competitive Solos tournament for week four of the Fortnite Fall Skirmish series has all wrapped up for both the European and North American regions.

FaZe Clan’s ‘Tfue’ was the victor in the NA half of the competition, while free agent competitive player ‘Boyer’ took home the EU crown. Both players secured $37,500 for finishing first, as well as 170 Club points for the Rift Raiders and Dusty Dogs respectively.

In order to better understand the following recap, look over the details of the six-match Solos format used for this week, called Big Bonus.

FaZe Clan pro player Turner ‘Tfue’ Tenney finished first place in the NA tournament thanks to a dominant 13 points. His championship run was fueled by an impressive back-to-back Victory Royales in matches 2-3, with four and five eliminations respectively

He was followed by Team Liquid pro ‘Vivid,’ who also finished the event with 13 points. The placing was good enough to secure $30,000 and 135 points for the Lucky Llamas.

His clutch performance in the sixth and final match was crucial to secure second place, as he got the Victory Royale with five eliminations, but missed out on first because Tfue had two match victories.

Team Liquid had another player finish in the top-three as POACH’s nine points were enough for third place. POACH took home $25,000 and 115 points for the Lucky Llamas.

Seven of his nine points came in the first match, where he also activated the Big Bonus twice, earning an additional $15,000. He ended up as the only NA player to reach more than seven eliminations in a single match. 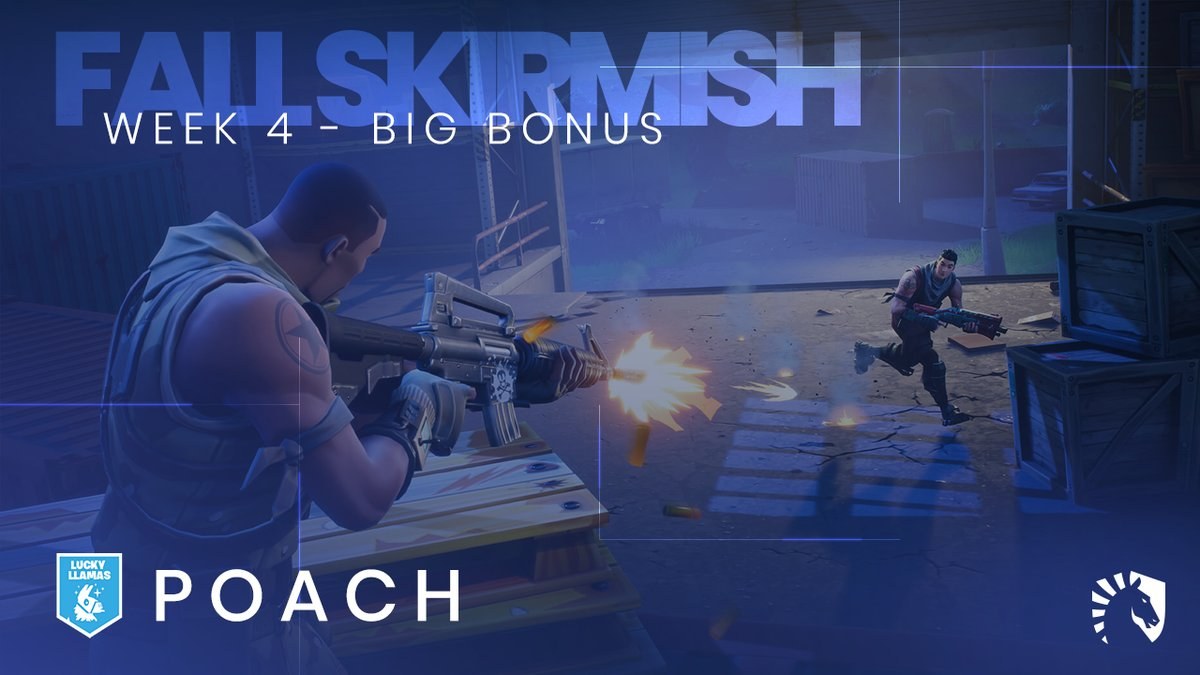 Here are the top-20 finishers in the NA half of the tournament, along with their earned prizes and Club points. The full final placements for all 100 NA players can be seen on the Fall Skirmish event page here.

Free agent competitive player Boyer used his strong eight point performance to claim the top spot in the EU half of the competition. His victory comes on the virtue of him owning the Victory Royale/eliminations tiebreaker.

Here is Boyer’s live reaction after the final standings were announced on the Fortnite broadcast:

Coming in second place, also with eight points, was ‘Tschilinken,’ who is also yet to find an organization to represent. His placing earned him $30,000 and 135 points for the Fort Knights.

He was followed in third by Ghost Gaming pro Kamo, who finished with seven points, securing $25,000 and 115 points for the Lucky Llamas. His Victory Royale in match four was critical in helping him finish in the top three.

Here are the top-20 finishers in the EU half of the tournament, along with their earned prizes and Club points.

The following standings reflect all points earned by Clubs in the week four competitive tournament as well as the week three ‘Lazy Links Tour’ Trials event.