The Fortnite in-game news section has updated and it confirms the new Zapper trap item will be in an upcoming update.

Another Fortnite update is nearly here and the in-game news page updated on September 2 to give us a good look at what to expect in the update.

The Zapper Trap, which previously leaked on August 31, has now been confirmed by Epic Games with an official image and description. 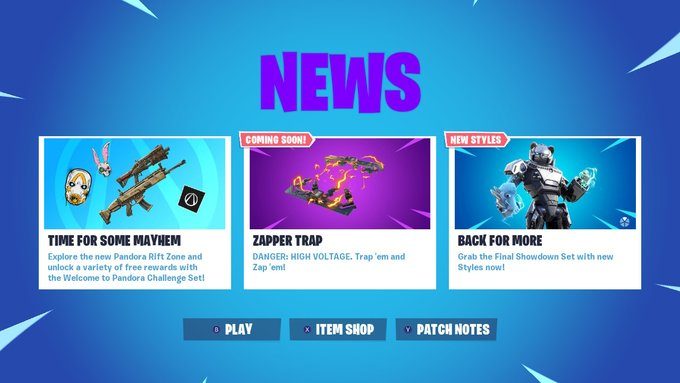 It’s anyone’s guess to how this trap will actually work but according to leaks by FortTory, it will be Epic rarity and can be placed on floors, walls, and roofs. On top of that, players will also be able to place it on their opponents’ builds too.

We’ve had traps like this in the past, with the Ceiling Zapper in battle royale mode at launch, but this was eventually removed in favor of just having the spike trap.

The same FortTory leak says players will be able to carry this trap in stacks of four, meaning you’ll be able to completely surround an opponent in a box – if that’s something you want to do of course.

The first Ceiling Zapper was notorious for being too loud to be all that effective, so it’ll be interesting to see if the new Zapper Trap is quieter this time around so players won’t know it’s waiting around the corner for them.

according to the current files The Zapper Trap will be Epic Rarity and can be placed on Floors, Walls and Roofs.

Also it mentions that it can be placed on enemy buildings…. interesting but we cant be sure till the item actually has been released.

The Max Stack size is 4 pic.twitter.com/oTKjdiKz5c

Usually when an item appears as “coming soon” it means it’ll be here with the next update, which will be the v10.20 content update.

It sounds like this will be the major addition but we can probably expect a couple of other changes to arrive as well, such as some map changes.

We don’t yet know exactly how the Zapper trap will work, but it won’t be much longer until we’re able to find out and shock our enemies.