Following the conclusion of the Mech vs. Monster event, Epic Games revealed jetpacks are here to stay in Fortnite, but they will not be usable in competitive playlists, much to the delight of players.

Jetpacks were always a controversial item in Fortnite and Epic Games decided to unvault them to avoid any further consequences after failing to balance them in a way that felt fair to both casual and competitive players.

They were unvaulted for the event that saw a giant mech vanquish a monster and protect the Fortnite island. Instead of going back to the vault, Epic Games felt like giving them another go around to see how they work in the current meta. 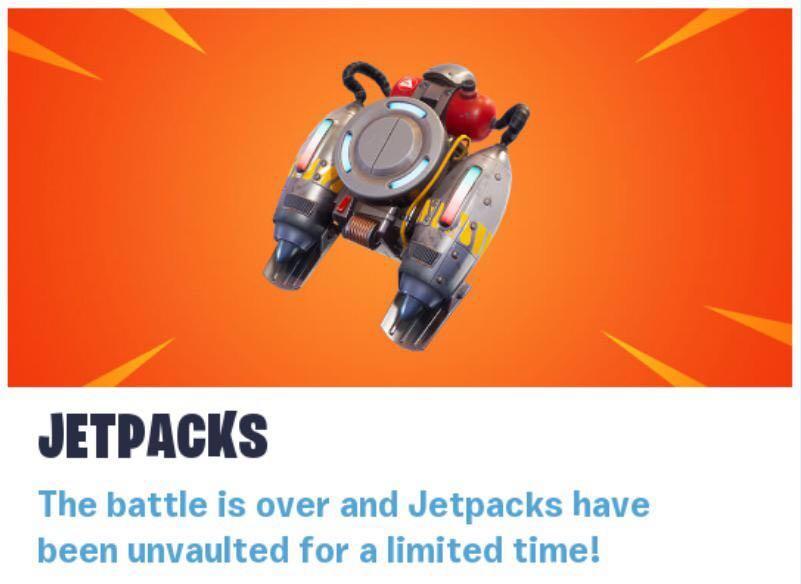 Jetpacks won’t be in Arena modes

Many pro players saw this announcement and quickly became worried Epic Games would be putting jetpacks right into competitive modes, forcing players to adapt very quickly to a meta.

The unvaulting came on the day of the Fortnite Xbox Cup which featured a $1 million prize pool, but Epic Games quickly confirmed the jetpack would not be active for that tournament or others going forward.

The battle is over and Jetpacks have been unvaulted for a limited time in our core game modes!

Jetpacks will not be available in our Competitive modes. pic.twitter.com/6TuU5fUDv5

It might be too early to tell, but it looks like Fortnite has started to learn its lesson about enabling major meta-shifting items on the days of tournaments.

A common complaint during the World Cup qualifiers was the weekly patches that tended to introduce new items or vehicles into the game that would greatly impact the way the game is played.

This was remedied as of late, as we’ve seen with this announcement that jetpacks won’t be in competitive modes and we’ve also learned the Storm Flip will remain vaulted going into the next season as they figure out how to make it best fit with the game.

Once the World Cup wraps up, there’s no major tournament on the horizon so it’ll be interesting to see how Epic Games handles the game after that.

The Fortnite World Cup Finals in New York City take place from July 26-28 and features the best players from around the world.